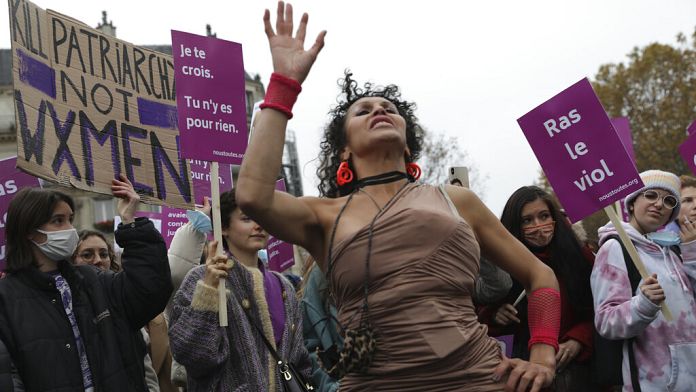 Jocelyne Adriant-Mebtoul is president of the French coordination of the European Women’s Lobby (KEY). This lobby (THE F) is the largest European feminist organization on the European continent and has about thirty national coordinations. The French coordination is one of the largest: it represents around a hundred associations. On the occasion of International Women’s Rights Day, Jocelyne Adriant-Mebtoul talks about European legislation and the various situations in terms of combating violence against women in Europe.

Does the Istanbul Convention (a pan-European convention that entered into force in 2014 on preventing and combating violence against women) have a real impact?

The Istanbul Convention is not just a bulwark. The convention has existed for about ten years, it is the reference treaty on violence, it is the first legally binding instrument at European level. When the convention is reflected at the level of States, their legislation and their practices, it has a considerable impact. It allows you to spread ideas. A concrete example of the consequence of the principles of the Istanbul Convention is that of Turkey. This country is the first to have adopted the convention, the first to have ratified it in 2012, then to have withdrawn from it in 2021 by presidential decree.

During one of our conferences, I had invited a Turkish-Belgian woman expert in gender equality. She claimed that the convention had had a great impact and had a concrete impact on the lives of Turkish women. The arrival of the health crisis has caused an upsurge in violence and in Turkey there have never been as many feminicides as in 2021. The Platform of Turkish Women’s Associations counted down 418 feminicides in 2021, it’s more than one woman killed per day! With this withdrawal of the convention, there were remissions of sentences for violent spouses… The convention had strong virtues in the defense of women’s rights in Turkey. Today, there is a multiplication of counter-powers in the country: Turkish women are fighting. We must therefore have legal texts on which we can rely and which can support us.

Why some countries have not yet ratified the Istanbul Convention?

The agreement was adopted by 35 member states of the Council of Europe. Moldova is the latest to ratify the convention. Ten signatures were not followed by one ratification. At European Union level, six countries have not yet ratified the Istanbul Convention. Lithuania, Bulgaria, Hungary, Latvia, Czech Republic and Slovakia. And this for different reasons: ideological, conservative and religious. For example, Bulgaria gives as argument the fear of the notion of gender identity and of the birth or creation of a third sex, as well as of same-sex marriage.

But, I believe in porosity and in the fact that spreading an awareness and an ideology across Europe is possible. As with the term feminist diplomacy, words advance ideas through the people who spread them, and that advances society. I am convinced that the term feminicide will spread throughout Europe, and this would have a strong impact. Spain has introduced it into its criminal code, for example. Moreover, this country is a fine example of political will. Canada uses the term feminicide, France too… things will change little by little.

The way of counting feminicides is not the same in all European countries. Will the latter one day be able to coordinate, in order to quantify this violence in a homogeneous way?

Femicide is underrated. We know very well that, as with violence, there are some who slip through the cracks. Many women do not file a complaint for the violence they experience because they are discouraged; they feel guilty. They say that guilt changes sides, but that’s not yet true… Many women who experience domestic violence hide it.

EWL and CLEF advocate in this direction. Violence is a global scourge whose extent we cannot measure, but there is an awareness that is taking place. And we have to work at the same time: economic and financial empowerment, health and reproductive rights, education, female leadership… We have to fight against the gender stereotypes also, because sexism has become a playful word, but it is precisely the root of the discrimination suffered by women. We are warriors and resilient!

Where is France in the fight against violence against women?

We could do better, but we are not too badly placed at the level of the European Union and Europe; France is one of the best. GREVIO, the group of experts of the Istanbul Convention, recognized that there was a real national policy and a mobilization of the French State on the fight against violence. For example, the Grenelle of domestic violence has highlighted certain issues. Three years ago, we didn’t talk about the concept of feminicide. In France, I think we have moved to the other side of the mirror, in the sense that we no longer talk about crimes of passion or miscellaneous facts when it comes to feminicides for example.

However, GREVIO has pointed to the insufficiency of accommodation places, the lack of places for listening and day care. On themes related to women’s rights, not only on violence, we do not have enough means. If we put on women’s rights the money that we put on sport, that would change the situation considerably. Today, we are doing considerable actions with bits of string. It’s also what wears down activists… The situation is tense, because we are sorely lacking in public funding overall. However, we have a feminist civil society and human rights which is very active in France. We don’t let go.

France: controversy after measures presented from Ibiza by the Minister of Education

Presidential in France: Emmanuel Macron will formalize his candidacy for a second term