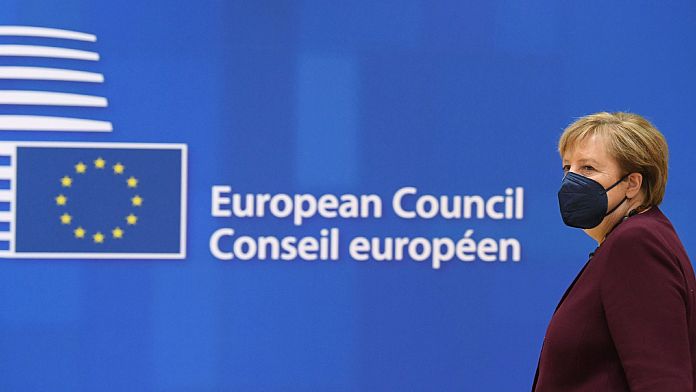 It”s a true panegyric. Before taking her bow in Germany in the coming weeks, barring a final reversal of the situation, Angela Merkel participated in her most likely last European summit in Brussels. And it is a departure through the great door reserved this Friday the European leaders for the German chancellor who participated in 107 of these major events marking the agenda of the European Union.

Gathered since in the Belgian capital, the 27 praised the qualities of Angela Merkel,”monument“for some,”compass for the European project“for others or even”huge female politician“, as the Chancellor prepares to leave the political scene after 16 years at the helm of Germany.

As master of ceremonies, the President of the European Council, Charles Michel, gave a speech in the form of praise. “I hope you will not be upset by this ceremony for your last summit“. he said in introductory form. And the former Belgian Prime Minister went on to say that the European summits “without Angela, it’s like Rome without the Vatican or Paris without the Eiffel Tower“.

“Your farewell to the European scene touches us politically and fills us with emotion“, also declared Charles Michel, saluting “wisdom“the chancellor who will be missed by Europeans”especially in delicate periods“.

This speech was welcomed by a standing ovation of the heads of state and government gathered for this Thursday in the Belgian capital.

On his Twitter account, the President of the European Council also posted a video montage presenting the great moments of Angela Merkel’s “European career” since her first summit in December 2005. Charles Michel concluded his message with a “Dankeschön Angela“.

The German chancellor, as well as the Swedish Prime Minister Stefan Löfven – also on the way out – both received a gift, a work by the young Franco-Dutch designer Maxim Duterre, evoking the Council building that hosts the summits.

For this last summit, where Poland was in the hot seat for its violations of the rule of law, Angela Merkel was faithful to her line, that of compromise, by pleading for dialogue with Warsaw.

The departure of the woman whom the Germans affectionately call “Mutti””will leave a great void, because this is someone who has been in office for so long and who has had such a great influence on the evolution of the European Union“, said the new Austrian Chancellor Alexander Schallenberg.

“He is someone who for sixteen years has really left his mark on Europe, and helped all Twenty-Seven of us to make the right decisions with great humanity at difficult times“, said Belgian Prime Minister Alexander de Croo. “She was a peacemaker within the EU. She was undoubtedly a great European“, he insisted.

The chancellor is”a huge politician, and has been a crucial stabilizing factor in very complicated situations“, added Lithuanian President Gitanas Nauseda, saying “his huge respect“for her.

“It was such a compromise machine, that when things didn’t move forward, we still had Angela (…) She usually always found something to unite us and allow us to go further“, observed Luxembourg Prime Minister Xavier Bettel, who has been with her for eight years. “I’ll miss her. She will be missed by Europe“, he said.

The president of the Commission, Ursula von der Leyen, former Defence Minister of Angela Merkel, had recently underlined how the analytical mind of this doctor in chemistry had been crucial to unblock the sometimes interminable European negotiations.

In recent months, EU leaders have multiplied tributes and thanks to the woman who has led Germany since 2005, almost as long as the chancellor of Reunification, Helmut Kohl (1982-1998).

Finally, in addition to the praise of her European peers, Angela Merkel was entitled to those of former US President Barack Obama, who thanked her”on behalf of the American people“for her”friendship and leadership“.

“Your beloved German people and the whole world have a debt of gratitude for your height of sight for so many years“, he added in a video shared on Twitter by Charles Michel.

Concern for the future of Europe

At the end of this European summit, the German chancellor expressed concern for the future of the EU, judging that her successors would have “large construction sites“before them in matters of the rule of law, migration and the economy.

“I am now leaving this European Union in my responsibility as chancellor in a situation that worries me. We have overcome many crises (…) but we have a series of unresolved problems“, she said at a press conference held after what should therefore be her last European summit in Brussels.

At home, Angela Merkel will, in theory, manage day-to-day affairs for a few weeks. Germany should have a new chancellor before Christmas. Social democrats, environmentalists and liberals have indeed unveiled this Thursday the timetable for their negotiations to install Olaf Scholz (SPD) in charge of the country at the beginning of December.