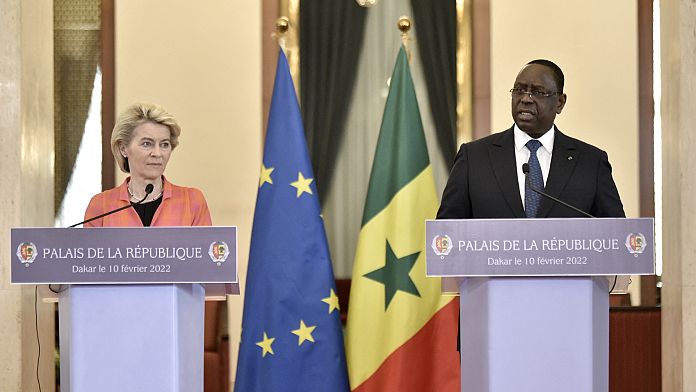 The President of the European Commission Ursula von der Leyen announced Thursday in Dakar that Europe intends to mobilize more than 150 billion euros of investments in Africa in the coming years.

“Today, I am proud to announce more than 150 billion euros by the Africa-Europe program; it is the very first regional plan under Global Gateway”she told the press, referring to the European initiative launched in December.

Global Gateway is supposed to mobilize up to 300 billion euros of public and private funds by 2027 in infrastructure projects around the world. Its declination for Africa rather sets the horizon at 2030, indicates a document made public by the European Commission.

The response to the “New Silk Roads”

“For all this, we of course need the private sector, its expertise and its strong investment, we also need political will at the highest level”said Ms. von der Leyen alongside the Senegalese president Macky Sall.

Global Gateway is seen as a response to “New Silk Roads” drawn by the China. In Africa too, China is rapidly expanding its economic and political presence.

A promise that precedes the European Union-African Union summit

Mrs von der Leyen’s visit comes a few days before the European Union-African Union summit on 17 and 18 February in Brussels. The Senegalese head of state recently assumed the presidency of the African Union.

“Investments will be at the heart of the discussions” of this summit, underlined Mrs von der Leyen. “In this field, Europe is the most reliable partner for Africa and by far the most important”she added.

Ms von der Leyen reiterated that Global Gateway was rooted in “the values ​​to which Europe and Africa are attached, such as transparency, sustainability, good governance and concern for the well-being of populations”.

Chinese or Russian competitors of Europeans in Africa are commonly accused of being less demanding when it comes to protecting the environment or human rights.

Ms. von der Leyen had indicated in an interview with AFP before her trip that foreign investment in Africa had “too often hidden costs, financial, political, environmental and social costs, sometimes very heavy”. She had deplored the links of “addiction” that they could establish, possible allusion to the debt contracted near the Chinese donors.

“600 million Africans are still without electricity”

The Senegalese president said he expected from the EU-AU summit “a renewed, modernized and more action-oriented partnership”.

“Europe and Africa have an interest in working together”because of their proximity and repercussions on security, and the opportunities offered to Europe by Africa, “with its human and natural resources and its development needs”he said.

He expressed his “commitment to the fight against global warming, but also our plea for the maintenance of gas financing to support the industrialization of Africa and universal access to electricity, since more than 600 million Africans remain still without electricity.

the Senegal, a poor country, places a lot of hope in the future exploitation of the gas and oil fields discovered in the Atlantic. It plans to produce its first barrels at the end of 2023 or in 2024.

The Senegalese president is alarmed by the commitment announced in 2021 during the COP26 climate conference by some twenty states, including the United States and France. They plan to put an end by the end of 2022 to the foreign financing of fossil energy projects without carbon capture techniques.

“Partygate”: the report on the evenings of the British government in full containment published