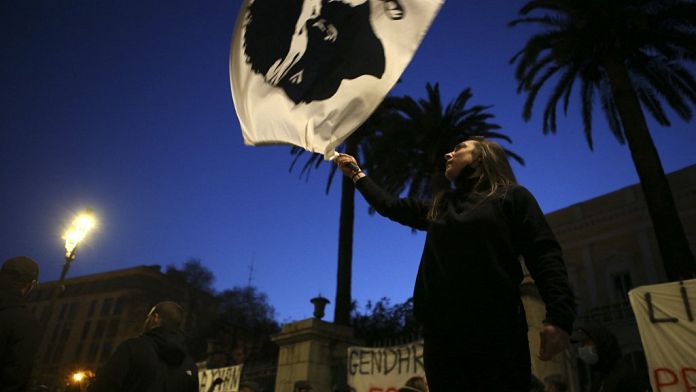 Tension has been at its height in Corsica since the attack on Yvan Colonna on March 2 in his prison in Arles in the south of France. The independence activist sentenced to life for the assassination of the prefect Claude Érignac in 1998 has since been in a coma.

This aggression will have been enough to set the island of beauty ablaze, a large part of the population demanding for several years the rapprochement of the prisoner in a Corsican prison. His status as a “particularly reported detainee” (DPS) prevented this rapprochement, but on Tuesday evening, the government finally decided to lift this prison regime, a gesture which was considered by many to be a provocation.

Riots in Ajaccio and Bastia

During the night of Wednesday to Thursday, riots occurred in Ajaccio, especially in the courthouse. At least 14 people were injured. In Bastia, 23 CRS and three civilians were injured.

“We witnessed scenes of near-urban riots with the end of the demonstration which took place on the Place du Diamant with people pushed back to the surroundings of the Place du Diamant and the prefecture and who headed for the Palace of justice. They went inside and started a burning of the ground floor of the courthouse” noted Nicolas Septe, prosecutor of Ajaccio.

Thursday, the demonstrations continued, with slogans pointing to the responsibility of the French state in the aggression of Yvan Colonna.

In the morning, about 400 high school students had gathered behind a banner “Per Yvan, Statu francesu assassinu” (For Yvan, French State assassin: Editor’s note) some, masked faces and armed with tennis rackets, ready to do battle with the forces of the order. But a dozen adults intervened, managing to prevent the clashes, noted an AFP journalist.

Two members of the Érignac commando soon back in Corsica?

The unrest and violence were condemned by Prime Minister Jean Castex, who however announced this Friday to lift the DPS status to Alain Ferrandi and Pierre Alessandri, members of the Erignac commando.

In order to ease tensions, Prime Minister Jean Castex lifted the DPS status on Friday to Alain Ferrandi and Pierre Alessandri, two members of the Érignac commando. A decision that applies “without delay“, and which therefore opens the way to a rapprochement in Corsica of the two detainees.

John Castex”proposed that once calm has returned to the island, the dialogue initiated in recent months on the evolution of the status of the Corsican community, as well as on the major economic and social issues of the territory can resume“.

Thursday evening, the autonomist president of the executive council of Corsica Gilles Simeoni had called on the State to “open a new political cycle and to say clearly that there is a Corsican question“. And among the expected “strong signals” were also “the immediate lifting of DPS status“by Mr. Alessandri and Mr. Ferrandi”and their transfer” in the Corsican prison of Borgo.

If Mr. Castex gave satisfaction on these points, “the bellows of popular anger could only fall a little or even a lot“, assured AFP political scientist Thierry Dominici, a specialist in nationalist movements, on Thursday.

Covid-19: tightening of restrictions in Italy and Sweden

Russian invasion: Kiev on a war footing, the militiamen organize themselves