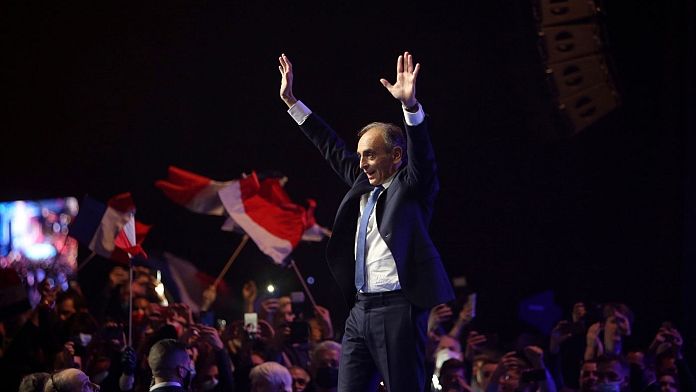 Journalists briefly sheltered, violence against SOS Racism activists, wrist injury for the far-right candidate … The first official meeting of candidate Eric Zemmour, in the suburbs of Paris, was punctuated by a series of incidents, but the polemicist got his message across:

“The stake is enormous. If I win this election, it will be the beginning of the reconquest of the most beautiful country in the world.”

In front of a crowd of supporters ranging from former Fillonists, to Lepenist militants via royalists, Eric Zemmour therefore promised a “Reconquest”, and that is the name of his party.

He asserts that he is the only candidate capable of “saving” France from the “decline and decadence” which, according to him, the nation is facing. But justice has twice convicted him of provoking religious hatred and racial discrimination in 2019, and other cases are pending.

Racism, sexism, anti-Semitism, Éric Zemmour accumulates controversies and seems to be proud of them:

“Over the past few months you might have heard a lot about me. Some have said that I was brutal. Yes, it could have happened because I am a passionate person, and my commitment is total, and the France on the brink. “

For his supporters, this candidate is exactly what the country needs:

“Even if it is sometimes excessive, I think we need it. At least in the beginning, to put our country in order.” explains Théo, a student.

“I think it’s important to come back to traditional, ancestral values. It’s important. And we must revalue them. We need more radical decisions” testifies Léo, another student.

And even if many people describe him as sexist, misogynist, Michèle, retired, explains:

“Well, I adore it. France is sinking, it is going against the wall and he is the only one with good proposals to get France out … and the West. Because the West is losing out. its identity, its culture, goes against the wall. “

At the start of the candidate’s speech, a dozen SOS Racism activists, hidden from the public, unveiled t-shirts with another message, “No to racism”.

Violence broke out. SOS Racisme activists were beaten and targeted by throwing chairs. Several chases took place at the back of the room, they were exfiltrated, in great confusion.

His supporters say they were provoked, Eric Zemmour does not contradict them and adds:

“It is not certain that Eric Zemmour can further broaden his current base of support and reach the second round of the French presidential elections next year. But his presence in this electoral race is proof that far-right ideas are infusing in society … And the start of the campaign set the tone for the country’s political debate as we approach 2022 “ estimates our reporter Anelise Borges.

We have to go back to the start of the meeting. After a series of supportive speeches at the podium, Eric Zemmour arrived in the room around 5.30 p.m.

In the middle of the jubilant crowd, an individual then grabbed him. “The aggressor” was immediately exfiltrated, said Eric Zemmour’s team. Then arrested by the police. The candidate’s entourage said in the evening that he was suffering from a wrist injury and that he had been prescribed nine days of ITT, total incapacity for work.

Even before the first speeches, at the Parc des Expositions de Villepinte, in Seine-Saint-Denis, the tone was also brutally mounted against a team from the Quotidien show (TMC-TF1), known for its sarcastic treatment of politics.

As they questioned participants, journalists were attacked by a small group of young supporters of the candidate, then booed by a growing crowd to shout “Everybody hates Daily”.

Security had to rush in to take them to safety briefly.

“Security overreacted. They came back. There was no violence.”, assured the candidate’s communication team.

At the start of the afternoon, some 2,000 demonstrators marched through the streets of Paris to “silence” Eric Zemmour. Activists hostile to the far-right candidate had also gathered in Villepinte, where 57 people were arrested, according to the police headquarters.