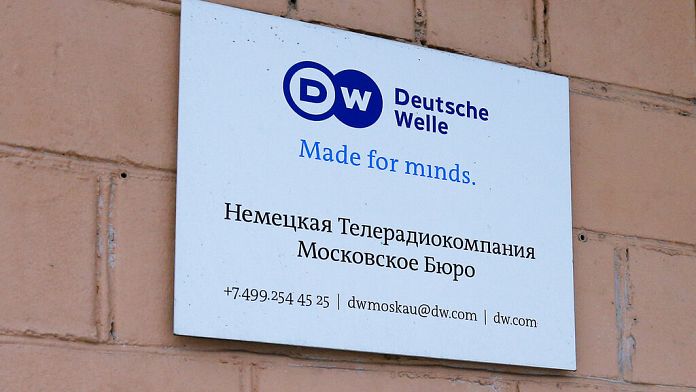 Russia on Thursday ordered the closure of the local office of German international broadcaster Deutsche Welle, in retaliation for the ban on the Russian channel RT from broadcasting in Germany, a first for a major Western media in history. post-soviet.

Russia’s decision is “unacceptable“, reacted Thursday the German Minister of Culture and Media, Claudia Roth. She pointed out that RT in German was broadcasting “without a license and did not ask for permission” Unlike in Deutsche Welle in Russia. The reaction of theEuropean Union was identical.

This closure announced by the Russian Ministry of Foreign Affairs comes in the midst of a crisis between Moscow and the West over Ukraine, which fears a Russian invasion.

For the past thirty years, the Kremlin has been careful not to attack foreign media, while the Russian media sector has been brought to heel since Vladimir Poutine took over the country in 2000.

But as relations with the West worsened, this policy evolved with, in particular, theexpulsion of a BBC journalist and D’a Dutch reporter in 2021.

The “retaliatory measures” announced by Moscow on Thursday involve the “office closing“room of Deutsche Wellethe “decertification of all employees“of this office and”the interruption of the broadcast” of this media on Russian territory.

“We are in shock. For all of us, this news is very personal“, said Yuri Rechetodirector of the antenna of Deutsche Welle in Moscow.

For his part, the president of DW, Peter Limburgprotested in a statement against “this absurd reaction“.”I am convinced that we will not be left behind. We will do everything to continue to be present on the Russian market, and if possible even more strongly“, he said on his Twitter account.

“The measures of the Russian authorities are incomprehensible and excessive“, he criticized.

The Russian Foreign Ministry also announced the launch of a procedure aimed at recognizing Deutsche Welle as “as a foreign agent“, an infamous and controversial qualifier already applied to several Russian media critics of power.

According to Moscow, sanctions are also planned against “representatives of German state and public structures involved in the restriction of the broadcast of RT“, a channel that notably promotes the position of the Kremlin abroad.

The Russian authorities have clarified that these measures fall under a “first stage“, promising an additional response”in proper time“.

A few hours earlier, the Kremlin spokesman, Dmitry Peskovhad castigated the ban on broadcasting made by the German regulator to RT like a “violation of freedom of expression“.

On Wednesday, Moscow also promised punishment for online platforms that “arbitrarily and unjustifiably deleted accounts from the channel“, an apparent reference to the American giant YouTube, which on December 16 suspended the German account of RT the day of its commissioning.

The channel’s satellite broadcast in Germany was discontinued soon after.

On Wednesday, the German regulator ZAK banned the broadcast of RT German on its website and on a mobile application, arguing that “the necessary authorization“wasn’t”neither requested nor granted“.

Moscow believes that this decision is actually “motivated by political considerations“.

The Russia and theGermany have seen their relations deteriorate in recent years, Berlin having established in particular that theopponent Alexei Navalny had been poisoned and condemned a Russian service agent who carried out a contract assassination in the German capital.

The delays in the commissioning of the gas pipeline between the two countries, Nord Stream 2, is another point that angers Moscow.

Chain RTinaugurated in 2005 under the name of “Russia Today“, is funded by the Russian state. It has developed in several languages, including English, French, Spanish, German and Arabic.

In France, RT is widely accused by authorities of being a Kremlin disinformation tool.

“Monkey pox”: the WHO considers it possible to stop transmission between humans

New talks between Russians and Ukrainians this morning