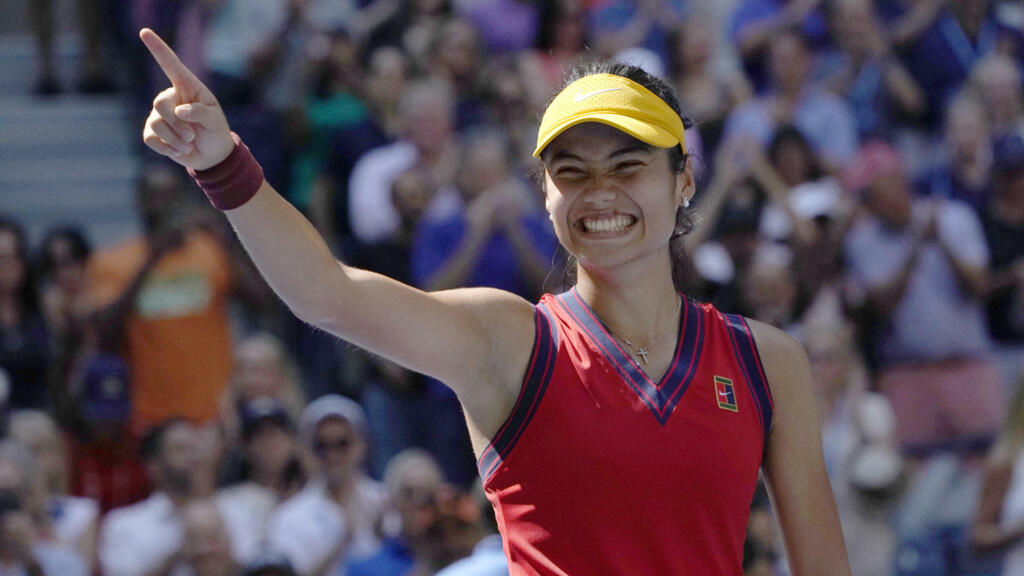 Already in sight at Wimbledon, the young British tennis prodigy Emma Raducanu qualified Wednesday for the semifinals of the US Open. At age 18, she became the first qualifier to reach the final of the US Grand Slam in the Open era.

She is in the semifinals of theUS Open and still hasn’t lost a set. At the age of 18, the British Emma Raducanu dazzled the American Grand Slam tournament with her talent and precocity. By dismissing Switzerland’s Belinda Bencic, seeded No. 11, she reached the semifinals of the U.S. major on Wednesday, September 8. tennis, a feat never achieved by a qualifying player in the Open era. She faces, on the night of Thursday to Friday, the Greek Maria Sakkari for a place at the top.

A flawless and flawless journey

Born in Toronto to a Romanian father and a Chinese mother, the British nugget made an extraordinary tournament. Since qualifying she had to play due to her low WTA ranking, she methodically defeated all those who came her way.

In the eighth round, the 18-year-old Briton beat American Shelby Rogers (43) 6-2, 6-1e), who had however created the surprise in the previous round by eliminating the world No. 1, the Australian Ashleigh Barty. In the previous round, she had almost humiliated the Spanish Sara Sorribes Tormo (41e a “double bubble” in front of a conquered public (6-0, 6-1).

His latest victim, Belinda Bencic, semi-finalist at the US Open in 2019 and Olympic gold medal in Tokyo, had nevertheless ideally entered the quarter-final by putting pressure on him with an entry break. However, the tennis prodigy was able to find the mental resources to overthrow her opponent and reach the last square.

The fact is unheard of at theUS OpenBut it is also very rare in other majors, as the young woman is only the fourth qualifier to reach this stage, after Australian Christine Matison Dorey in Melbourne in 1978, American Alexandra Stevenson at Wimbledon in 1999 and Argentina’s Nadia Podoroska last year at Roland Garros.

At Wimbledon, the pressure was too much

The revelation of the tournament, present on the professional circuit since the end of 2019, had seen its lightning rise stopped because of the Covid-19 crisis. She took advantage of the period to devote herself to her studies and pass the British equivalent of the baccalaureate. Relieved of this constraint, she was invited to the Wimbledon tournament where she made talk about herself.

For the first Grand Slam of his career, the one that then pointed to the 338e world place reached the knockout stages. But suffering from dizziness and breathing difficulties, she was forced to retire against Australian Ajla Tomljanovic (6-4, 3-0).

The next day, she explained on her Instagram account to have “probably mishandled (her) stress playing in front of such a large crowd”.

“I think the whole issue caught up with me. After the first set and intense exchanges, I began to breathe painfully and feel dizzy, ” explained the young player.

Since then, the Briton has learned to handle pressure, as her performance against Belinda Bencic on Arthur Ashe centre court at Flushing Meadows in New York proved.

“I think I’m playing better here than at Wimbledon,” she said from New York. “The sequence of games and the experience I have accumulated over the last four, five weeks helps me improve my game game by game.”

The circuit is ecstatic

The British nugget and her energetic and dominating style, based on powerful flat shots down the court and two-handed backhands, won over tour watchers. “Emma’s progress has been spectacular because that’s who she is on the field, every day. His mentality, his dynamism and his ambition are glaring, his work ethic is relentless. She wants to be the best and tries to win every point,” says Jamie Delgado, Andy Murray’s coach, who has done several training sessions with her this winter. By the way, the British star also follows her performances closely.

For former Czech champion Martina Navratilova, no doubt : “He is a superstar in the making. We don’t want to put too much pressure on her, but she has this thing that we saw the first time at (Rafael) Nadal, (Novak) Djokovic and (18-year-old Spaniard) Carlos Alcaraz. It’s there, right before our eyes. She was born for that.”

For Virginia Wade, the last Briton to have entered her name in the US Open (1968), Emma Raducanu’s talent is without doubt : “There are a few categories with which I evaluate the players, she told the British press. Athletic qualities, determination, concentration, ability to improvise. Emma ticks all the boxes. I’d just like to see her come to the net a little more often. […] She could even go on and win this tournament. You look at her and you think, ” Why not ?”, she notes.

Youth in power in the women’s table

Leylah Fernandez is, at 19, Flushing’s other female sensation. She has successively dismissed the titleholder, Japanese Naomi Osaka (3e), the German Angelique Kerber (17e) and, on Tuesday evening, the Ukrainian Elina Svitolina (5e), each time going up a set.

“She’s a great player. She fights for every point. She plays well, she is very mobile and I know she will have nothing to lose,” said Aryna Sabalenka, who also expects “the public to support her very strongly”.

The Belarusian, who hopes to do well better than at Wimbledon where she was stopped in the semi-finals, has, without making any noise, passed her rounds without hindrance and even made quite a strong impression.

Facing two opponents who are certainly much higher ranked, but hardly used to opening the doors of a Grand Slam final, Leylah Fernandez and Emma Raducanu, who have crossed paths on the courts since childhood- “in the under-12s, we played the Orange Bowl and other tournaments, as juniors at Wimbledon, too”, said the British–, do not feed any complexes.

“We really want to make a difference in the world of tennis,” Leylah Fernandez said Tuesday night. “We want to have an impact on tennis. This tournament just proves how well we adapt to everything.”