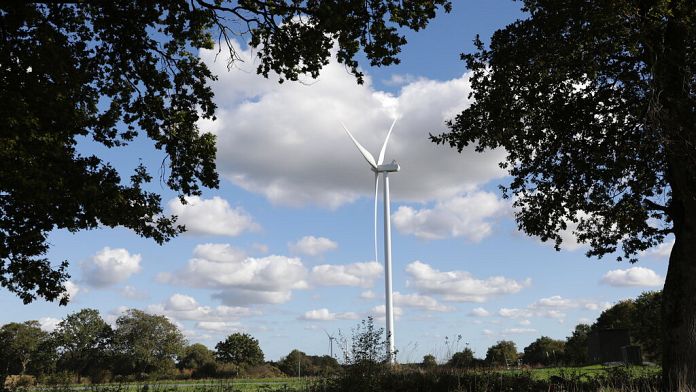 Two months before the presidential election, the environmental crisis remains one of the major concerns of the French people. According to an Ipsos Sopra-Steria poll commissioned by public radio France Inter and published at the end of January, it comes second in the campaign, behind the social crisis.

Despite this manifest interest, this theme is struggling to emerge in the presidential debate, as underlined by the association Notre affaires à tous, which launched Thursday a call to give climate the place it deserves in the countryside.

So what are the main proposals of the candidates in the lead in the polls, in terms of energy and the environment? Euronews takes stock.

Fabien Roussel stands out on the left on nuclear

The communist candidate presents a ecological program provided. First of all, he promises to comply with the recommendations of the IPCC (Intergovernmental Panel on Climate Change), by implementing a major climate policy with 140 billion euros per year. “An ecological and social fund will be created and supplemented by the State, companies and monetary creation”, indicates the candidate’s program.

It provides for the implementation of a vast investment plan “financed by the profits of large companies and the most polluting modes of transport”, to lower fuel prices and help with the purchase of “light, more economical and low-polluting vehicles.”

Fabien Roussel is also betting on free urban public transport, as well as the development of rail and river freight. Finally, the communist candidate believes that the reindustrialization of France and the return of companies to the territory is one of the solutions against the climate crisis.

Regarding energy, Fabien Roussel is betting on an energy mix based on renewable energies and nuclear, with the construction of at least 6 new EPRs. Objective: carbon neutrality by 2040-2050

The communist candidate also stands out, as noted by the media Greenby his defense of the “French way of life” based on “good wine, good meat, good cheese” and against “lesson givers”.

The People’s Union candidate presents many measures for the climate and the environment, and proposes in particular to organize the “ecological planning”, which is the 3rd main objective of its program. It also plans to enshrine in the Constitution the principle of “the green rule”“according to which no more is taken from nature than she is able to replenish”, and a “blue rule” on the same principle for water.

The People’s Union proposes the most ambitious goal of reducing greenhouse gas emissions: 65% less by 2030. The current government’s “climate and resilience” law provides for a 40% drop.

Other measures include the launch of a massive €200 billion plan for “ecologically and socially useful investments”. Side transport, the emphasis is on soft and collective modes of transport (bicycle, train, freight, urban public transport) and not the individual car, of which it is important to “reduce the use” believes the People’s Union. The program also plans toban airlines when an alternative of less than 4 hours exists by train.

On the energy side, Jean-Luc Mélenchon proposes the exit from nuclear power. It is necessary, according to him, “to plan the passage to 100% renewable energies with a double watchword: sobriety and energy efficiency”, in particular by doubling the onshore and marine wind farms. The People’s Union also opposes the extension of nuclear reactors beyond 50 years

Yannick Jadot wants to anchor climate protection in the Constitution

Unsurprisingly, the environment is at the heart of the program of the Green candidate. First of all, he wants anchor climate protection in the Constitutionto guarantee “the preservation of biodiversity, the environment and biological diversity, the fight against climate change and take into account the scarcity of natural resources”.

With his proposals, the environmental candidate intends to reduce France’s carbon footprint by 55% by 2030and achieve carbon neutrality by 2050. This notably involves the allocation of 10 billion euros per year for the thermal renovation of energy strainers, the ban on the sale of new fossil fuel vehicles in 2030 or the prohibition of internal flights when there is an alternative of less than four hours by train.

To finance the transition, Yannick Jadot intends to rely in particular – like Jean-Luc Mélenchon and Anne Hidalgo – on a Climate ISF, “whose rates will be set according to the commitment of the assets in the climate transition”. It would be raised to 2 million euros of assets “in order to affect only the 1% of the richest households”.

With regard to energy, The Greens are also planning a exit from nuclear and the transition to 100% renewable energy, with quantified objectives: the shutdown of 10 nuclear reactors by 2035, 6,000 new wind turbines, 340 km² of additional solar panels by 2027, and 32 TWh of biogas at horizon 2030.

The socialist candidate believes in his program that “ecology is the fight of the century”. It proposes the inclusion in the Constitution of the protection of the environment, and the creation of a post of conservationist, on the model of the defender of rights. It also provides for the recognition of crime of ecocidelike Yannick Jadot and Christiane Taubira.

Anne Hidalgo also suggests that a climate and biodiversity budget be voted on each year in parliament, to set CO2 emission reduction programs, and wants to put in place a “climate golden rule”: 50% for expenditure accelerating ecological transition and 50% for social measures.

The socialist candidate also insists on the need for action in the digital : they particularly want to develop electronic equipment reconditioning activities and involve Gafam in the ecological transition.

Anne Hidalgo is not opposed to nuclear power, even if she aims for a 100% renewable energy mix, “as quickly as it will be possible to do so”. For her, the nuclear should be used as transition energy, without hasty exit. However, it does not provide for the construction of new EPRs or small modular reactors

Emmanuel Macron: the nuclear turn of the quasi-candidate

The French president is not yet an official candidate and therefore does not have a program as such. However, he has already made several announcements in the media or during speeches, such as the reduction of energy consumption by 40% in 30 years, or the organization of a moratorium for ban the sale of fossil fuel vehicles in 2040.

During the launch of the French presidency of the European Union on January 18, Emmanuel Macron also said he was in favor of the inclusion of environmental protection in the charter of fundamental rights of the EU.

Overall, the French president advocates an “ecology of the best” against an “ecology of the least”, which would be proposed by some of his opponents on the left. We remember, among other things, his defense of 5G against “amish“ who would like, according to him, to return to the “oil lamp“.

Regarding energy, the Head of State recently made a 180° turn. Unlike in 2017 and at the start of his mandate, he now wants the extension of the life of power plants existing as long as security permits, as well as the construction of 6 “EPR2” which should be put into service “by 2035”. It also advocates investment in renewable energies, with the aim of carbon neutrality by 2050.

Unlike his opponents on the left, the program of the candidate on the right does not include a section specifically dedicated to the environment. The Les Républicains candidate plans to achieve carbon neutrality by 2050, but says she does not believe in “punitive ecology”, and prefers financial incentivesrather than “taxes”. It also aims to end the sale of new vehicles running on fossil fuels in 2035, and wish to replace public transport running on diesel with clean transport.

Valérie Pécresse appears as a defender of agriculture, against agribashing and for “agrifierty”. She opposes especially at the “zero pesticide” strategy defended by several candidates. She wants to help farms adapt to climate change “by encouraging water storage that is still too regulated”, and relies on INRAE ​​and new technologies to “win the fight against climate change”.

On the energy side, the right-wing candidate wants a new programming law that will stop the plan to close the reactorsand also wants to build 6 new EPRs. Valérie Pécresse also wants to invest in “all renewable energies”, and finance research into the energies of tomorrow, such as green hydrogen. She finally wants to allow residents to refuse wind projects.

The environment is not among the major campaign themes of the National Rally candidate, who emphasizes immigration and security. The far-right candidate nevertheless plans a few measures such as the launch of a rehabilitation plan for old housing thanks to “effective aid”, free trains at off-peak hours for 18-25 year olds, or the allocation of the 25 billion euros planned for offshore wind power to subsidies for the replacement of oil boilers.

The candidate also declares pro-nuclear “to ensure the energy independence” of the French. It provides for the construction of 6 new EPRs and has declared itself in favor of the reopening of the Fessenheim power plant. Marine Le Pen is also fiercely opposed to wind power which “disfigures the landscape”, and wishes to “stop wind projects and gradually dismantle existing parks”.

The Reconquest candidate! foresees in his program to “reduce our greenhouse gas emissions”, without quantified objectives. For this, he proposes todeveloping the use of electricity and hydrogen in public transport”, and “to invest in the insulation of residential and industrial buildings”. He also proposes a “vast plan for soil depollution” and to bring out “a French plastic recycling sector”.

Regarding energy, the far-right candidate is resolutely pro-nuclear. It proposes the construction of no less than 14 new EPRs by 2050 and extend the life of power plants to 60 years or more. He also wants to remove the objective of reducing the share of nuclear power in the energy mix by 50% by 2035.

Like Marine Le Pen, Eric Zemmour is deeply opposed to wind power. He wants terminate all current or future projects “who ransack our territories”, and wants to redirect public support for wind and solar power to geothermal energy and heat pumps.