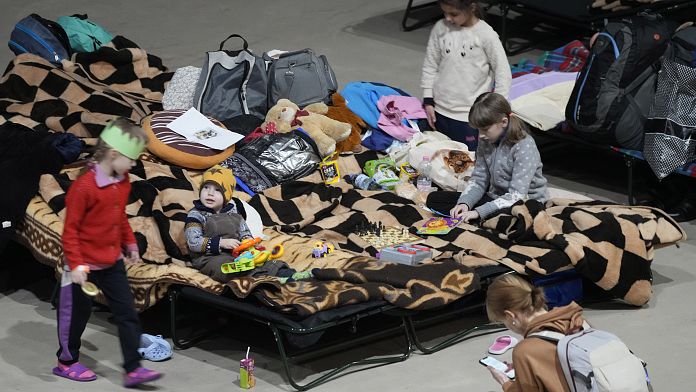 The rate of arrival of people fleeing the war in Ukraine is still very intense, especially for the neighboring countries, which welcome, but must also protect the most vulnerable refugees.

Romania, Hungary, Moldova, Bulgaria, the arrivals of refugees from Ukraine are increasing day by day. According to United Nations High Commissioner for Refugees (UNHCR), they would be more than a million in Poland. In Warsaw, a sports center has been transformed into a reception centre. The volunteers work tirelessly, but they no longer know where to turn, so massive is the influx of Ukrainian refugees fleeing the war.

“So far, about 1,300 people have come here and pushed the door of this center. The number of those who stay here is constantly rotating. They come and they go. We are constantly arranging transport, so it is impossible to give a precise figure“, Explain Malgorzata Naporowskacenter coordinator.

On the border between Ukraine and Romania, they also flock by the thousands. Concerns are growing on how to protect the most vulnerable refugees so that they do not become the target of all kinds of trafficking and human trafficking in particular.

“The risk of this happening is very high. Many women are trafficked every year. This is a risk not only for them, but also for the children. So in times like this, people take action. Many Romanians have mobilized and I am very proud of it, but the risk that some people capitalize on the pain of these families remains very high.“, says Andreea Bujor, director of communications for theNGO World Vision Romania.

In a Hungarian train station, after hours on the train, refugees join volunteers who will transport them to accommodation centres. Police are advising women to make sure their phone battery is full and to take note of the license plate of the vehicles they are going to ride in. And it is actually better, if we are to believe some volunteers.

“We were surprised that there was no verification and nothing was asked of us. I think we are the good guys who take the refugees, but there can also be the bad guys who are there for the wrong reasons.“, reports Stefan Krebs, a German volunteer in Hungary.

In total, more than 2.5 million civilians have already fled the fighting and the bombardments launched by Moscow against Ukraine on February 24.

Nearly 200 new cases of Covid-19 in Shanghai on Friday