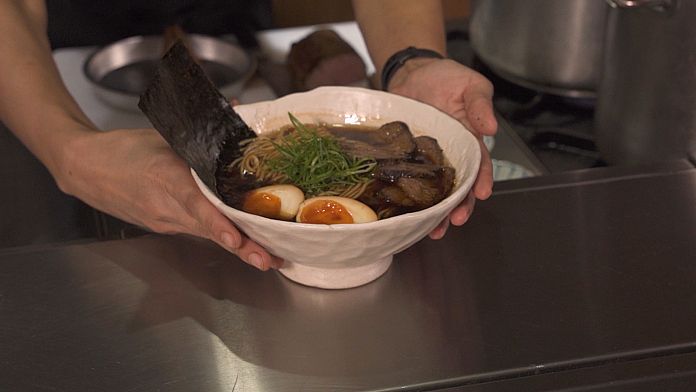 Indian expat and Dubai resident Neha Mishra worked for fifteen years as a producer in the United Arab Emirates before following her appetite for another career. In love with ramen, the Japanese soups, she trained herself in the preparation of the broth, tare and noodles that make up them, and then set up her dining club “A Story of Food” where she welcomed guests to her home.

Its activity was a great success: it served dinner to 7,000 people in three years. Faced with this high demand, Neha Mishra realized that it was time to move to a larger kitchen. Together with an investor, the young woman opened Kinoya in the green neighborhood of The Greens in Dubai. A restaurant that gave its ramen, even greater notoriety.

The secret to making delicious ramen, she admits, is hours of preparation that culminate in a quick assembly. “You have to do things very quickly, so it’s demanding,” she said. “I _ _ l need every element to be ready,” she adds.

When assembling her signature beef shoyu ramen, the chef begins by slicing a juicy and generous fillet that has cooked in a soy sauce marinade. “This gives it a sweet flavor; the fillet is very undercooked, bleeding : this is how I like to present it in the bowl because the broth will continue to cook the meat,” she explains.

The perfection of the egg

Then, Neha Mishra cut the egg that she previously prepared. “To judge if it is a good ramen in terms of technique, always look at what the egg looks like,” she says. “If it is cooked properly, then you know that your ramen has been well thought out,” she asserts.

Neha Mishra whose golden egg yolks testify to her talent, gives us her tips to get a perfect egg : “We bring an egg to room temperature, then boil it for exactly six minutes ; then we remove it from the water and immerse it in ice and after that we peel it and let it marinate in our mixture of soy sauce and mirin” for a whole night. Which gives it a caramel hue.

Regarding the broth, the chef cooks it over low heat for a little more than twelve hours by placing in a pot, celery, carrots, garlic, ginger and poultry. As for his recipe for tare, it’s a well-kept secret. This element gives ramen, that fifth flavor that the Japanese call umami. It is simply known that it is made with mushrooms, bonito flakes, anchovies, soy sauce and kombu seaweed.

The tare is the first element that is placed in the bowl. Next, the broth, then the noodles, slices of meat, egg and onion again. Neha Mishra adds her final touch by placing on top, a simple sheet of nori seaweed. When serving, steam still needs to escape from the bowl. A dish that certainly makes you travel.