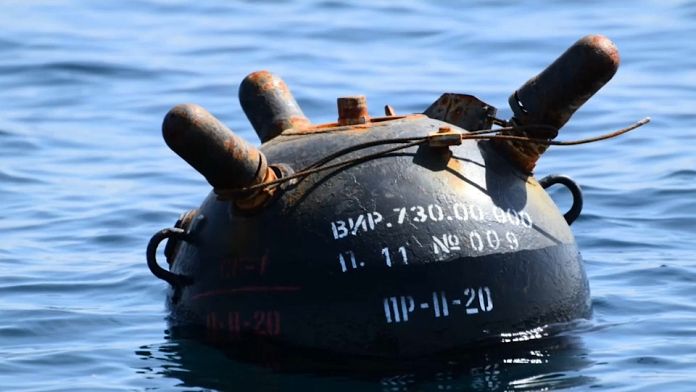 A drifting mine from Ukraine being neutralized in the Black Sea… Since Saturday, three explosive devices of this type have been discovered: two in Turkish territorial waters and the third near the Romanian coast.

Our team in Romania monitored the demining operation on site: “At this very moment, military divers are carrying out an operation to neutralize a mine discovered 70 kilometers from these coasts. It is a very dangerous and delicate mission”, underlines our correspondent Diana Sobaru.

The mines were spotted by fishing boats which immediately raised the alarm. Authorities are warning sailors of the risk of falling on explosive devices drifting from the Ukrainian conflict zone.

“These are small mines, used against surface ships, which contain a charge of 20 kilos of TNT. They are black, so if the sea is rough, you may not see it”, emphasizes Commander Cătălin Gherghinescu.

Mines that are difficult to spot, hence the recommendation made to ships to strengthen visual surveillance and radio communications.

The Romanian Navy fears that other mines are currently adrift in the Black Sea and are approaching the coast. This is why patrols will be reinforced to detect any suspicious objects.

These floating mines are particularly dangerous for merchant ships which, due to their size, do not have the ability to maneuver quickly to avoid them.

How is the EU preparing for possible cyberattacks?