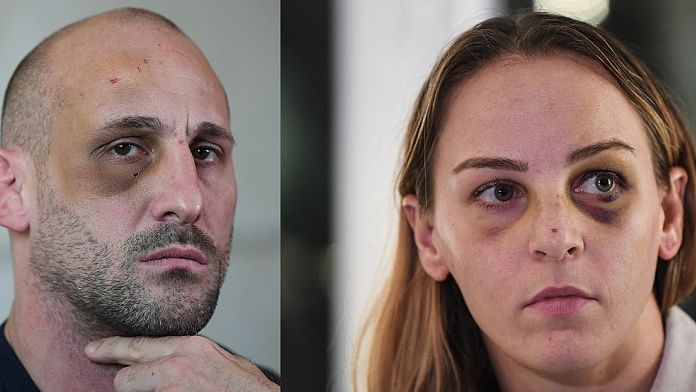 The world of judo in shock since the assault denounced by judokate Margaux Pinot, whose swollen face appears on Twitter. She accuses her now ex-companion, Alain Schmitt, of domestic violence. The one who is also his trainer was however released by the correctional court of Bobigny, the judges considering “not to have enough evidence of guilt”. The prosecution appealed. On social networks the decision of the judges of Bobigny was strongly denounced.

Since Alain Schmitt denounces his lynching on social networks, he says that Margaux Pinot attacked him first during an argument:

“She started screaming really loud, she threw the sheets, she jumped on me, grabbed me by the collar and then I backed up, I backed up and she threw me into the upright. the door, I hit my head “, tells the judoka before continuing the story of their argument.

“I think this lady has behavior problems, says Caroline Wasserman, the coach’s lawyer, in any case she is not the white dove that one might think, and it is no coincidence that the independent magistrates, who took the time to read the documents and to question the accused after two days in custody, have decided to release Alain Schmitt. “

The 27-year-old describes an outburst of gratuitous violence on the part of her companion, who had consumed alcohol. She thought she was dead, she says, and maintains her version, claiming that her mate is lying.

_ “In a way, this decision of acquittal is a decision of conviction of Miss Pinot and it is unacceptable taking into account all the elements”, _ declares his lawyer Rachid Madid.

The judokas Teddy Riner and Clarisse Agbégnénou expressed their support for their teammate from the France team. The presidential candidates Anne Hidalgo and Jean-Luc Mélenchon have also done so.