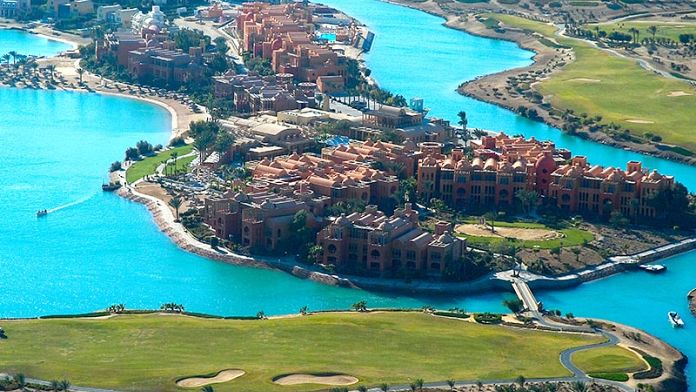 If you’re looking for coral reefs, golden beaches and world-class luxury hotels, look no further. It”s to El Gouna that you must surrender. But hurry, because this small tourist town is becoming more and more popular every year.

It took only three decades for El Gouna, located on Egypt’s southern coastline, to make a name for itself. There is a network of small lagoons and cobblestone streets that connect everything, in this unlikely city on the edge of the desert.

Omar El Hamamsy, CEO of Orascom, the promoter of El Gouna, told Euronews: “There is a general atmosphere of relaxation, ease, tolerance and acceptance, while being in an absolutely wonderful place from the point of view of climate, nature and geography.”

Travel to Egypt: what restrictions?

Upon arrival in Egypt, you must present one of the following documents:

-proof of COVID-19 vaccination (vaccination schedule completed at least 14 days prior to arrival in Egypt); or

-a negative PCR test (carried out within 72 hours prior to departure).

An approved laboratory must issue the PCR certificate. Certificates are accepted in Arabic or English.

If you are arriving by air, check the conditions of your airline, which may require a negative PCR test even for fully vaccinated passengers.

Should I wear a mask in Egypt?

Wearing a mask is mandatory at airports and train stations. The only exception to this rule is the consumption of food or drinks.

It is recommended to wear a mask in hotels and restaurants, but it is not mandatory.

How to get to El Gouna?

El Gouna is only a four-hour flight from most European capitals. It is located only 25 kilometers north of the large city of Hurghada.

The most popular route for international travelers is the one that passes through Cairo. From Cairo, head south for five hours on a road along the Red Sea coast.

To reduce the duration of the trip, many vacationers opt for a domestic flight connection from Cairo to Hurghada. This flight lasts only one hour and one can find tickets at low prices, depending on the airline. Many taxis and minibuses are available at Hurghada Airport, which will take you in thirty minutes to El Gouna.

Getting around El Gouna

The two highlights of El Gouna, the marina and the city center, are only a seven-minute drive from each other.

Most tour operators and hotels have shuttles that take visitors to the meeting points of tourist tours. Cars, scooters and ATVs can be rented at a few outlets, but the best mode of transportation is the tuk-tuk taxi.

Tuk-tuks are the fastest, cheapest and most fun way to get around El Gouna. Friendly and always ready to tell a joke or an anecdote, the tuk-tuk drivers are among the best connoisseurs of the uncontrounable places of El Gouna.

Tuk-tuks are limited to two people and the minimum price is 20 Egyptian pounds, or just over one euro.

What currency is used in Egypt?

In El Gouna, many vendors accept euros and US dollars. However, prices can be more advantageous if you pay in Egyptian pounds.

You will find many ATMs in the city and at most of the sites.

There are fifteen hotels and resorts in El Gouna that suit every budget. Five of them are five-star hotels. Golf lovers will find their happiness at the Steigenberger and theAncient Sands, both of which have their own 18-hole golf course.

Travelers who prefer to stay at home will find many guest houses and apartments available on Airbnb and booking.com.

What to do in El Gouna?

During your stay in the seaside town, many excursions are offered to allow you to explore the Red Sea.

Excursions in 4×4 or quad will take you to the desert mountains. Here you can see how the Bedouins from the region still live today.

Egypt is, of course, a country steeped in history. Many excursions are offered in the nearby city of Luxor to visit the Valley of the Kings, burial place of the most powerful kings of Egypt, the temple of Queen Hatshepsut, they colossi of Memnon and the temple of Karnak.

Gourmets will appreciate the variety of restaurants in the city center and the marina.

When is the best time of year to visit El Gouna?

El Gouna enjoys a good climate throughout the year, and can prove to be an ideal destination for the winter sun.

There are a few popular events on the El Gouna calendar that can help you plan your visit.

The film festival d’El Gouna takes place in October. For two weeks, some of the biggest stars of Arab cinema, as well as international talents, come to project their latest films. Expect to see the streets and bars very lively during these two weeks.

Another unmissable rendez-vous for snowsports: every year, the world kitesurfing community goes to El Gouna for the water sports festival Kite Mania.

Dubai offers itself the deepest diving pool in the world