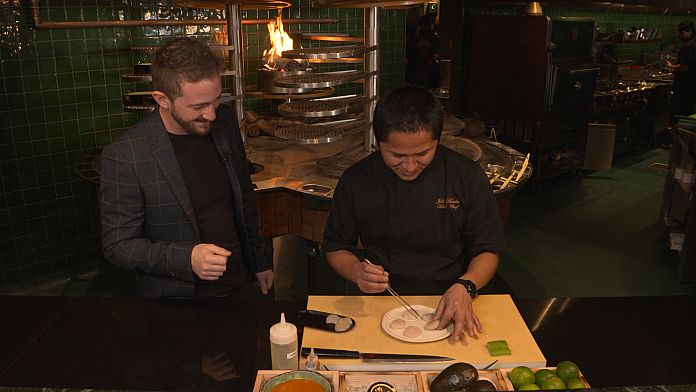 “Sushi” is now recognized worldwide, because Japanese cuisine has been adopted by many cultures around the world, especially in Western countries.

The popularity of Japanese cuisine has grown in part due to its health benefits and traditional food products such as green tea, soybeans, seaweed, raw fish, matcha, and fermented foods like miso.

Japanese chefs are also known to spend years perfecting their cooking techniques. It sometimes takes up to ten years of experience to become a real Japanese chef, also called “itamae”. Their recognized mastery allows them to create complex and delicious dishes.

The birth of the “Nikkei” kitchen

In the late 1800s, Japanese immigrants began arriving in Peru. Staying true to their heritage, they brought with them aspects of their culture, including their culinary skills.

After traveling 15,000 km from their homeland, Japanese chefs struggled to find the ingredients traditionally used in their recipes. That’s why they started using local ingredients like the Peruvian “aji panca”, “aji miraso”l and “aji amarillo” peppers that are very common in Peruvian cuisine.

The use of these ingredients with Japanese cooking techniques has therefore given rise to a whole new cuisine called “Nikkei”. The word “Nikkei” comes from “Nikkeijin” which designates the Japanese who emigrated from Japan and their descendants.

The popularity of this cuisine did not take long to grow, and the “Nikkei” spread to neighboring countries of Peru. Today, food lovers in Dubai can sample the unique fusion of Japanese and Peruvian cuisines at Clay restaurant.

The restaurant’s chef, Peruvian-born Jolbi Huacho, uses Nikkei recipes in each of his dishes. The Peruvian chef shows us his recipe for “Hotate Tiradito Clay” and as he puts it so well: “Every dish should look like a work of art”.

Dubai chef shares her recipe for the perfect shoyu ramen

Dubai offers itself the deepest diving pool in the world