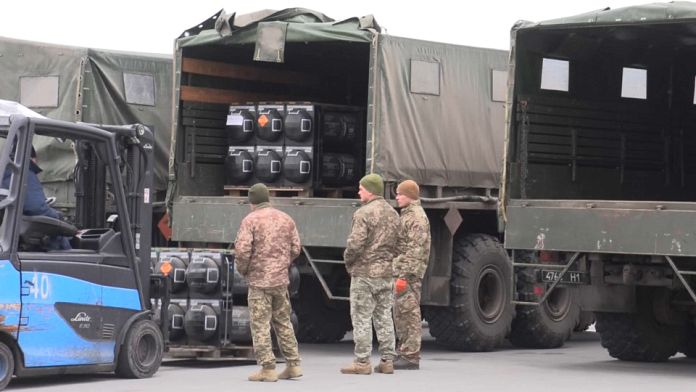 The discussions were “difficult”, according to the French and German negotiators. Russia, Ukraine, Germany and France met in Berlin on Thursday under the “Normandy” format, to discuss the Ukrainian crisis. According to the German government, a new meeting is scheduled for March.

These discussions of nearly 9:30 a.m. were held while Russia, which has massed troops at the gates of Ukraine, is accused of preparing a new military operation against this country, accusations rejected by Moscow which claims to just want to ensure its security. in the face of hostility from Kiev and NATO.

“The discussions were difficult and made it possible to clearly highlight the different positions and the different options for a solution.“, report the “circles of Franco-German negotiations”, quoted in a press release from the government.

“At the same time, it became clear that all N4 participants stick to the minsk agreements“, signed in 2015 between Kyiv and pro-Russian separatists in Eastern Ukraine.”They will continue to work for their full implementation“, reads the press release.

After a pause of several months, discussions on this Normandy format were relaunched with a meeting in Paris at the end of January, as part of diplomatic efforts to reach a de-escalation in Ukraine. “It was agreed to meet again after the next Trilateral Contact Group meetings in March“, concludes the press release. The trilateral contact group brings together Moscow, Kyiv and the Organization for Security and Cooperation in Europe (OSCE).

The American President Joe Biden on Thursday called on American citizens to leave Ukraine “now” due to the increased risk of a Russian invasion, warning that the situation could “get out of control quickly” despite diplomatic efforts in recent weeks.

A “real risk” of armed conflict in Europe

The Secretary General of NATO Jens Stoltenberg for his part again warned against the “real risk of a new armed conflict“in Europe, on the occasion of the visit to a key Romanian military base for the Alliance.”Russian troop numbers increase while warning times decrease“, warned Mr. Stoltenberg on the site of Mihail Kogalniceanu (south-east, near the Black Sea), while Westerners accuse Moscow of preparing a military aggression against Ukraine.

A thousand American soldiers sent as reinforcements by Washington should arrive during the day, in order to consolidate the eastern flank of the Alliance. Scenarios other than an invasion of Ukraine are possible, he added, citing “attempts to overthrow the Kyiv government or hybrid cyberattacks“.

“At the same time, there is no certainty, and so we continue to call on Russia to de-escalate and engage in political dialogue with NATO.“, added the leader of the Alliance during a press conference alongside Romanian President Klaus Iohannis.

Referring to the “concern” of NATO in front of this “concentration of troops coupled with threatening rhetoric from Russia“, he reported the”unity“of the allies and their determination to react.”This is why the presence of NATO troops in Romania is so important“, underlined Mr. Stoltenberg, who welcomed the availability of France to participate in a future battle group in Romania, a country bordering Ukraine.

“We are going through the most serious crisis since the fall of the Iron Curtain.”for his part launched Klaus Iohannis, denouncing the “Russia’s bullying strategy“.

Several dozen American armored personnel carriers, previously stationed in Germany, have arrived in Romania in the past 36 hours with the destination of the Mihail Kogalniceanu base.

Such deployments only “pour oil on the flame” and “contributing to an escalation of tensions“, had launched Wednesday the Russian ambassador in Bucharest Valéry Kouzmin, summoned the next day to the Romanian Ministry of Foreign Affairs.

Romania, a member of the Atlantic Alliance since 2004, already hosts 900 American soldiers, 140 Italians and 250 Poles.

With the pandemic, the quest for rural spaces benefits wine tourism

Poland legalizes pushback at its borders, a controversial practice