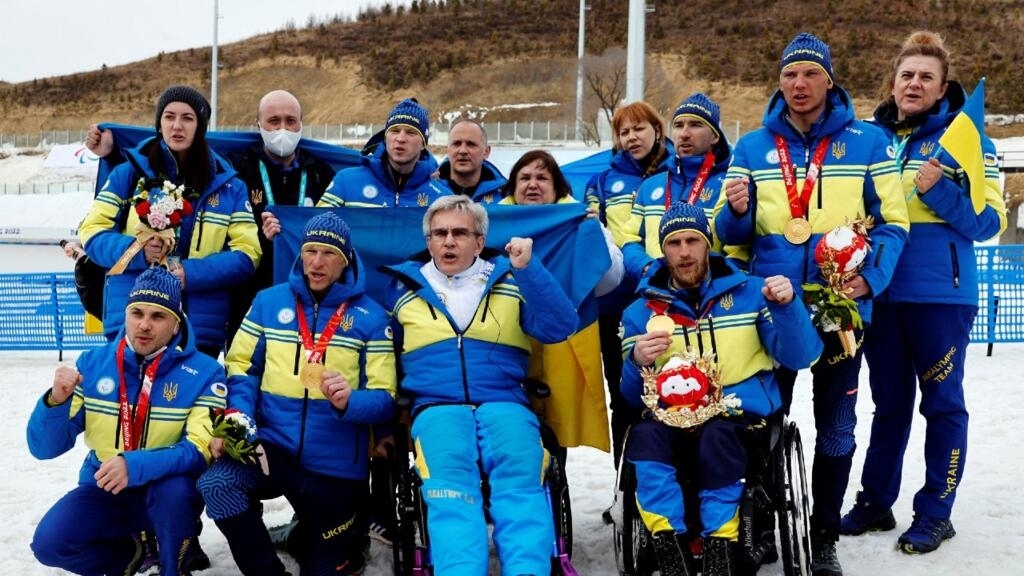 With eleven gold medals, Ukraine finished the Paralympic Games in Beijing in second place in the nations ranking, behind China and ahead of Canada. Despite the conflict affecting their country, Ukrainian athletes won a total of 29 medals and particularly dominated the biathlon events.

The Paralympic Flame ends Sunday, March 13 on the Winter Games, after ten days of exceptional performance by Ukrainian athletes faced with the invasion of their country.

Despite a very difficult context, the team ofUkraine particularly shone during this competition. She exceeded her medal record (25) reached in 2006 in Turin by winning 29 medals including 11 gold and finished in second place in the nations ranking, behind the host country, China (61 medals including 18 gold) , and ahead of Canada (25 medals including eight gold).

On the last day, Ukraine was crowned for the first time in its history in the 4 x 2.5 km free cross-country ski relay. The country has particularly shone in biathlon with 22 of its 29 medals won, including eight gold.

“We want to protect the honor of our country”

Throughout these two weeks, Ukrainian athletes never stopped thinking of their compatriots. During the opening ceremony on March 4, the delegation marched, fists raised, in front of the President of the International Paralympic Committee (IPC), Andrew Parsons.

From the first day of the competition, Vitalii Lukianenko, crowned in the sprint in the visually impaired category, dedicated his title “to the guys who protect our cities”. Paralympic champion in the standing women’s long-distance biathlon, Liudmyla Liashenko, who had learned of the destruction of her house in Kharkiv, also paid tribute “to the Ukrainians, to the army which protects us and to my family”.

Her compatriot, Oksana Shyshkova, crowned three times in Beijing, also had a thought for her country with each victory. “We want to protect the honor of our country,” she commented. “Maybe that’s what motivates us to stay focused and do the best we can. Maybe that’s the secret.” Biathlete Anastasiia Laletina, however, was unable to take part in the race in the seated category. The team announced that his father, a soldier, had been “taken prisoner” and “beaten” by Russian soldiers.

To show their unity and strength, Ukrainian athletes and staff protested on Thursday. The entire delegation had gathered in the Olympic Village. In front of a banner with the message “peace for all”, they observed a minute of silence for the victims of war. Valeriy Sushkevych then explained: “This minute is for the thousands of people, including children and disabled people, who are in Ukraine. If humanity is civilized, then this war must be stopped. People, women and children deserve to live, not die.”

As reported by The Guardian, President Volodymyr Zelensky did not fail to salute the performance of the national team. In a speech on Friday, he explained that “Ukraine’s victories are worth their weight in gold, silver or bronze to all of us.” For the Ukrainian head of state, who has become a national hero, “it shows the world who the Ukrainians are and what strength we have, with a weapon in our hands on the battlefield or with a sports rifle on a track of biathlon”.

This success is not a surprise either. For several years, Ukraine has been in the top six of the Paralympic Games medal table. But this impressive harvest of medals was undoubtedly stimulated by the war and the absence of Russian competitors. While they were initially allowed to participate under a neutral banner, the latter, along with the Belarusians, were eventually excluded from the Games under pressure from teams and athletes.

After the Paralympic break, the Ukrainian team will fly to Istanbul, then stay a few days in Warsaw before returning to Ukraine by coach. Several members of the team, living in particular in Kharkiv, a heavily bombed city, may not return home. Others spoke of their desire to help by donating blood, clothing or offering shelter.

CAN-2022: Cameroon – Comoros: the Comorians no longer have a goalkeeper!