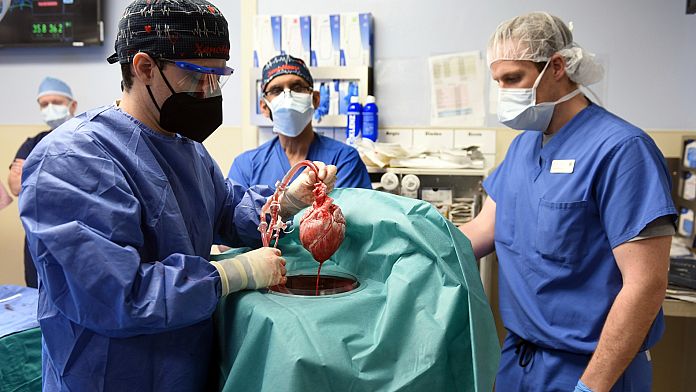 The first patient in the world to have received a heart transplant from a genetically modified pig has died two months after his operation, the hospital where he was cared for announced on Wednesday, while stressing that the experience nevertheless represented a great progress for research.

David Bennett, 57, died on Tuesday, after his condition “started to deteriorate several days ago“, said in a press release the University of Maryland Hospital. “When it became clear that he would not recover, he was given palliative care.“

The operation, carried out on January 7, had raised great hopes, because such xenografts – from an animal to a human – could potentially make it possible to remedy the shortage of organ donations.

“The heart functioned very well for several weeks, without any signs of rejection“, said the hospital. After the operation, “the patient was able to spend time with his family and participate in physiotherapy activities to help him regain his strength“. He had even been able to watch the very popular final game of American football, the Super Bowl.

The experiment can thus be considered a success, according to the researchers.

“We have obtained valuable information, and learned that a genetically modified pig’s heart can function properly inside a human body when the immune system is properly suppressed.“said Muhammad Mohiuddin, scientific director of the hospital’s xenotransplantation program.”We remain optimistic and plan to continue our work in future clinical trials.“

The pig from which the transplanted heart came had been genetically modified to avoid immediate rejection. A new experimental drug had also been used, in addition to the usual anti-rejection drugs, to suppress the immune system. During transplants, the danger is indeed that the latter does not detect the organ as a foreign body and begins to attack it.

“Until the end, my father wanted to keep fighting to preserve his life and spend more time with his family.“said in a statement his son, David Bennett Jr. “We were able to spend precious weeks together while he was recovering from his surgery, weeks that we would not have had without this miraculous effort.“.

“We hope this story can be a beginning of hope, not the end“, he added.

The pig, the ideal donor

Nearly 110,000 Americans are currently on the waiting list for organ transplants and more than 6,000 people who need transplants die each year in the country.

In 1984, a baboon’s heart was transplanted into a baby but the little one, nicknamed “Baby Fae”, only survived 20 days.

Pig heart valves are already widely used in humans, and their skin can be used for grafts in burn patients.

For many, pigs are ideal organ donors because of their size, rapid growth and litters, which include many young.

After the announcement of the operation, the American media had revealed that David Bennett had been condemned in the past for having stabbed a man in 1988. The victim had found himself paralyzed, in a wheelchair.

Medical ethics prohibit patients’ past from influencing the way they are treated.

“We are devastated by the loss of Mr. Bennett“said surgeon Bartley Griffith, who performed the transplant, on Wednesday.”He has proven to be a brave patient“, now known from “million people worldwide“.

Indonesia: Hundreds of lanterns lit up the sky for the Buddha festival in Borobudur