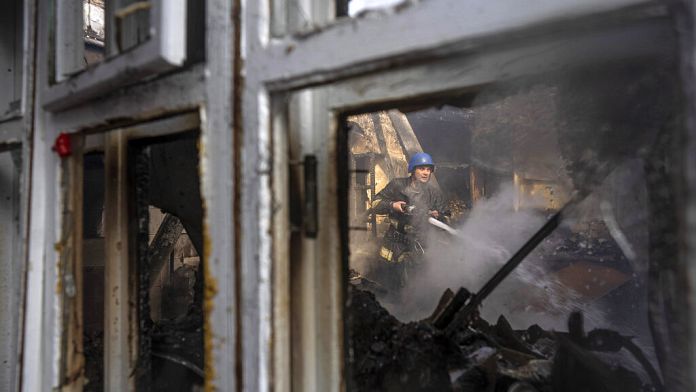 On the 28th day of the war, the Russian army is still trying to surround kyiv. But no major offensive has been seen since Monday.

This morning, Russian shelling hit houses in the suburbs of kyiv. Volodymyr Okhrimenko, a septuagenarian, no longer has a home. He recounts that terrible morning:

_ “My sister and her husband were inside. We are two families in the house. My sister was knocking on a window shouting ‘we are burning’!”_

Videos from the Russian Ministry of Defense show missiles sent to Ukraine, increasingly sophisticated and fired from remote positions. Losing momentum and even driven out of some of its positions on the ground, the Russian army continues to punish Ukraine by air, where it has a clear military superiority.

Mariupol, strategically located between Crimea (south) and the separatist territory of Donetsk (east), has been under a rain of Russian bombs for weeks.

“Nearly 100,000 people in inhuman conditions” are trapped in the ruins of Mariupol, “under total siege, without food, without water, without medicine, under constant bombardment”, alerted Ukrainian President Volodymyr Zelensky.

Russian tanks rolled into the city and a senior Pentagon official said on Tuesday evening that Russian strategy now relied on “long-range fire on the city center”, observed by the Americans “for the past 24 hours. “.

The city of Kherson remains the only major city completely conquered by the forces of Moscow, which “are still trying to encircle Mykolaiv with the ambition of advancing west towards Odessa”, estimates the British Ministry of Defense.

Kharkiv (northeast), the country’s second city, is surrounded by Russian forces on several sides and major axes, but is not surrounded.

The Ukrainians “are now, in certain situations, on the offensive,” Pentagon spokesman John Kirby told CNN, saying they are “chasing the Russians and pushing them out of areas where the Russians were by the pass”.

No major bombardments in western and central Ukraine have been observed in recent days.

Russian forces carried out several “unsuccessful” attacks near Donetsk and Lugansk, according to the ISW. The institute also cites the Ukrainian general staff, according to which several smaller towns would have held out against assaults from the Russian army and its auxiliaries.

“The Russian effort is still in the north of Donbass (Yzium-Severodonetsk) and especially Mariupol,” said former French colonel Michel Goya.

President Zelensky affirms that 1300 Ukrainian soldiers were killed, and that the Russian military losses amount to 12,000. According to the Pentagon, there would be 7000 dead on the side of the Russian army.

All to your pink ribbons: it’s breast cancer awareness month