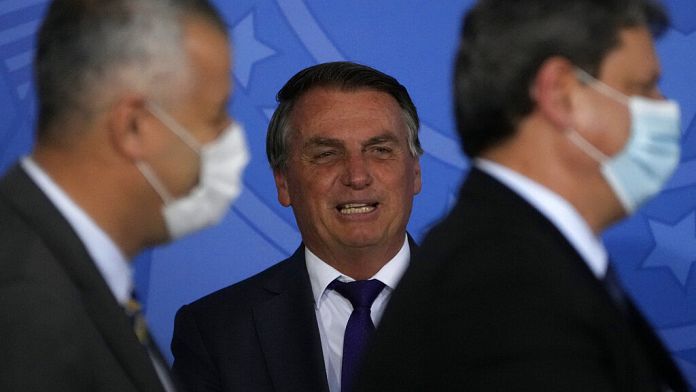 Accused of having”deliberately exposed“Brazilians to a ‘_contamination of mass_e’ by Covid-19 by a Senate inquiry commission (ICC) that asked Wednesday his indictment for ten crimes, President Jair Bolsonaro said “guilty of absolutely nothing“.

“We know we did the right thing right from the start“, he insisted, during an official ceremony in the state of Ceara (north-east).

The final report of the ICC, presented on Wednesday, nevertheless designates the far-right president as having been “the main culprit for government mistakes during the pandemic“that killed more than 600,000 people in Brazil.

In addition to the “crime against humanity”, which could be tried at the International Criminal Court in The Hague, the rapporteur Renan Calheiros has retained nine counts ranging from “quackery” to “incitement to crime” to “violation of health measures” and “prevarication”.

“The president has committed many crimes and he will pay“, said ICC President Omar Aziz at the opening of Wednesday’s session.

These serious accusations should nevertheless have a mostly symbolic scope for the moment, Jair Bolsonaro benefiting from support in Parliament able to avoid him the opening of impeachment proceedings. Likewise, Attorney General Augusto Aras, one of his allies, can block any indictment.

The political impact, however, could prove disastrous for this former army captain, whose popularity is already at an all-time low. In this respect, he is far from assured of being re-elected in a year, as he is far behind in the polls by the left-wing ex-president Luiz Inacio Lula da Silva.

For senators, the crimes cited in the report are “intentional“, the Bolsonaro government having deliberately decided not to take the necessary measures to contain the circulation of the virus, hoping that the population will reach “herd immunity“, a strategy”high risk“, according to the ICC.

“After six months of intense work, this Parliamentary Committee gathered evidence that shows that the federal government (…) acted slowly in the fight against the pandemic caused by the coronavirus, deliberately exposing the population to a real risk of mass infection“, summarizes this damning report of nearly 1.2000 pages read in an abridged version by Renan Calheiros.

In particular, the ICC denounced the “deliberate delay“in the acquisition of vaccines, the Bolsonaro government has preferred to promote”early treatment“ineffective as hydroxychloroquine against the virus, with”tragic consequences“for the people.

The rapporteur had initially planned to include two more counts, for “homicide” and “genocide of indigenous populations”, but withdrew them at the last moment, to ensure that his report will be approved by vote next week.

The commission also called for the indictment of four ministers and two former ministers. Three of the president’s sons have also been targeted by the ICC for “inciting crime” through the dissemination of false information.

“This report is an instrument of revenge against Bolsonaro and his family, it is obvious that neither my brothers nor I, and even less the president, have committed any crime“, said Senator Flavio Bolsonaro, the eldest of the siblings, shortly before the presentation of the text.

The report will be forwarded to the Public Prosecutor’s Office, which is the only one competent to indict the persons incriminated by the ICC. In the case of Jair Bolsonaro, experts consider this indictment unlikely, since it is the responsibility of the Attorney General.

The ICC investigated the government’s responsibility for the severe oxygen shortage that caused the death of dozens of patients by asphyxiation in Manaus (north).

The Commission also looked into suspected corruption in the purchase of vaccines, as well as the relationship between Brasilia and private health mutuals accused of promoting “early treatment”.

One of them, Prevent Senior, is suspected of having conducted experiments with this type of treatment without the knowledge of his patients and of having pressured his doctors to prescribe them to “human guinea pigs”.

After hitting France, storm Aurora is heading for Germany