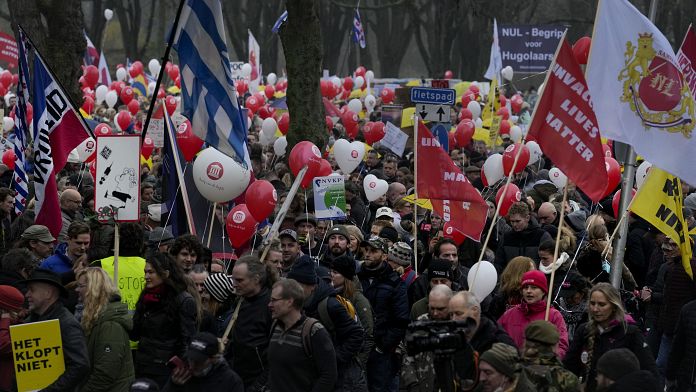 New Saturday demonstration in several European countries against health restrictions in particular, while the old continent is still hard hit by the fifth wave of Covid-19 and threatened by the Omicron variant.

Thousands of people were gathered in the streets ofUtrecht in the Netherlands, against the partial confinement imposed three weeks ago by the government. Bars, restaurants and non-essential stores must close at 5 p.m. Infection rates started to decline slightly this week in the country, but remain near record highs.

Other event at Vienna, Austria, for the third weekend in a row, while the country has been in partial confinement since November 22. 40,000 people were gathered according to the police. Among them, many followers of conspiracy theories that question the existence of the pandemic. 1,200 police were deployed to supervise the rally. Several people were arrested for having thrown “pyrotechnic devices” at the police. Two policemen were injured. A counter-demonstration bringing together 1,500 people was organized “against fascism and anti-Semitism and for solidarity”.

TO Barcelona, ​​Catalonia (Spain) the demonstrators were protesting against the recent entry into force in the autonomous region of the sanitary pass, called “Covid Certificate”. It is now mandatory to access restaurants, bars, gyms and hospitals. : “We are humans, not a QR code” and “It is not a pandemic, it is a dictatorship”, shouted the demonstrators.

In France finally, it is the caregivers who demonstrated on Saturday in the streets of Paris. Not against the sanitary restrictions this time, but for “defend the public health system“.” We want beds, posts, for the public hospital, “chanted the demonstrators. They denounced in particular the shortage of staff, the closures of beds in hospitals and poor working conditions, which lead to resignations in cascade . Nurse in intensive care at the Kremlin-Bicêtre (Val-de-Marne), Séverine, 44, deplored that in her department of beds remain “closed because people are not there“to fill the posts. She hopes for recruitments”to be able to do (his) work properly“.