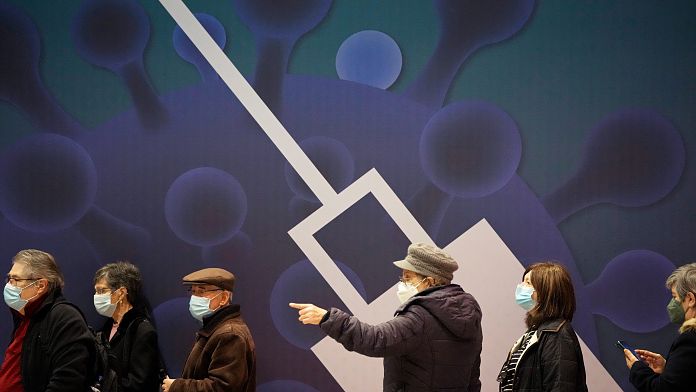 On the Old Continent, already in the grip of a fifth wave, where the Delta strain of the virus is predominant, the appearance of the Omicron variant raises fears of a new runaway of contaminations. To cope, European governments are strengthening their health arsenal, as the end of the year holidays approach.

In Norway, new measures came into force in Oslo and its region, after the appearance of a suspected outbreak of the Omicron variant. One case was detected among about fifty people, all positive for Covid-19. Vaccinated, they had participated in a Christmas meal. The authorities fearing a major cluster have therefore implemented the wearing of a compulsory mask in transport and shops, the introduction of teleworking and a gauge for private events.

THE’Germany will impose drastic restrictions on the unvaccinated, akin to virtual confinement. Chancellor Angela Merkel and her successor Olaf Scholz thus decided on Thursday to prohibit access to non-essential stores, restaurants and certain leisure activities for the non-vaccinated. The vaccination obligation could also come into force as early as February

In Bavaria, a Land particularly struck by the new wave (13,961 cases out of 74,352 new contaminations recorded by the German authorities), local initiatives are trying to highlight what the spread of Covid-19 really represents and alert the population to the very complicated situation in health establishments. To encourage vaccination, Rosenheim hospital has decided to light in red the rooms occupied by Covid patients. Seen from the outside, the effect is striking.

In Swiss, 2,000 people including 1,600 students were placed in quarantine after the discovery of two cases of the variant on a campus of the very famous International School of Geneva.

At UK, Prime Minister Boris Johnson wanted to set an example by receiving his booster dose. For him, however, it is not necessary to take more measures before Christmas.

“The most important thing is that people follow the advice that we have given and that people do not cancel the things that they have planned. It is not necessary at all and is not what we are advocating. What we are doing is trying to respond in a balanced and proportionate manner to the arrival of the Omicron variant.“said the tenant of 10 Downing Street

In France, Prime Minister Jean Castex announced the holding of a new Health Defense Council next Monday to see “whether additional measures need to be taken“facing the 5th wave and the Omicron variant, of which nine cases were detected on French territory, where 48,416 new contaminations were also recorded this Thursday by the health authorities.

Increased risk of re-infection with Omicron

Based on these mathematical models, “Omicron could cause more than half of infections caused by SARS-CoV-2 virus in the European Union within the next few months“, the agency warned Thursday.

Especially since, according to a study by South African scientists, the risk of catching Covid-19 again is increased with the Omicron variant.