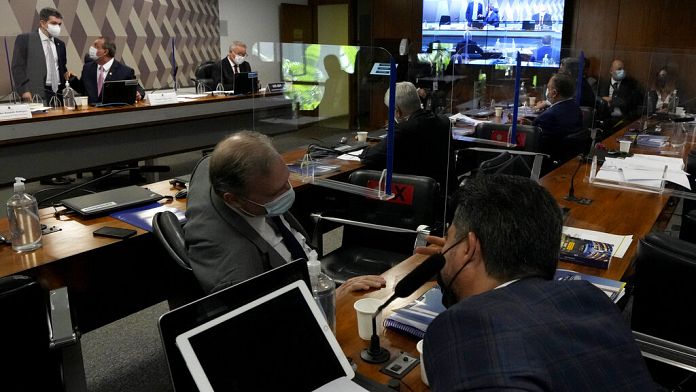 It”s now up to Brazilian or international justice to act against President Jair Bolsonaro. The parliamentary commission of inquiry into the pandemic has approved the damning report of its six-month investigation, and thus recommends the indictment of President Bolsonaro for nine crimes, including “crime against humanity”.

The ICC accuses the government of “deliberately exposing” Brazilians to “mass contamination”.

Seven of the 11 senators who led the committee approved the nearly 1,200-page text.

At the end of the vote, senators observed a minute of silence in tribute to the more than 606,000 Brazilians who died from Covid-19.

“Many people are responsible for the victims of Covid, but it is mainly because of the president, this serial killer, who makes a fixation on death and continues to repeat everything he has said in the past” then said Renan Calheiros, rapporteur of the committee of inquiry on the pandemic.

In particular, the ICC denounced the “deliberate delay” in the acquisition of vaccines, as the government preferred to promote ineffective treatments such as hydroxychloroquine, with “tragic consequences” for the population.

The ICC has also investigated government responsibility for the oxygen shortage that killed dozens of patients in Manaus (north), and the relationship between Brasilia and private health mutuals. One of them, Prevent Senior, is suspected of conducting experiments with early treatments without the knowledge of his patients and of putting pressure on his doctors to prescribe them to “human guinea pigs”.

Corn “it is an extremely weak report, legally speaking, a political report that has brought no benefit to the Brazilian people” reacted Flávio Bolsonaro, one of the president’s sons, also a senator.

The report also recommends the indictment of 80 people, including several ministers, ex-ministers, companies, and three of Bolsonaro’s five children, all elected officials.

The ICC charges should have a mostly symbolic scope for now, Jair Bolsonaro enjoying support in Parliament able to avoid impeachment.

Experts consider an indictment unlikely, since it is the responsibility of the attorney General, Augusto Aras, an ally of the president.

However, the “crime against humanity” could be tried at the International Criminal Court in The Hague.

The ICC also requested that Jair Bolsonaro “retract on a national (TELEVISION) channel regarding the correlation between anti-Covid vaccine and AIDS contamination”, under penalty of a fine of 50,000 reais (7,700 euros).

The Brazilian president who is antivaccine, anti-sanitary pass and whose popularity rating is at the lowest, had said last week “guilty of absolutely nothing”.

Germany: one dead and several injured after a shooting in a university