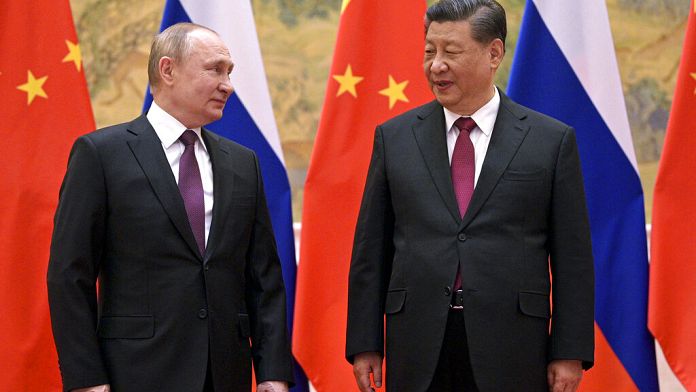 Sino-Russian friendship is solid as a rock. » according to the Chinese Minister of Foreign Affairs, Wang Yi, certain things do not change and the two powers remain fundamentally allied against the West.

But at a time of the Russian war in Ukraine and the isolation of the Russian Federation, is this declaration of diplomatic loyalty still sincere? Defiance, dependence? Barthelemy CourmontAsia Pacific Research Director at the Institute of International and Strategic Relations (IRIS)looks back at the origin of contemporary Sino-Russian relations and their new geopolitical impact.

Euronews: Historically, what are the diplomatic ties between China and Russia?

Barthelemy Courmont: The ties between Russia and China are contemporary. During the Cold War, their relationship was very strained. This is what caused the rapprochement between China and the United States in the 1970s and the diplomatic recognition in 1979 of their bilateral relations. There is talk of post-Cold War Sino-Russian ties that were timidly put in place in the 1990s, under the presidency of Boris Yeltsin in Russia. The accelerating effect took place thanks to the 1999 Kosovo war, when Russia had positioned itself against the intervention of NATO and against the role of the United States. At the same time, NATO forces bomb the Chinese embassy in Belgrade, which provokes a protest from Beijing. This is the first time that the two countries meet on the same line in the face of a major geopolitical subject, in the post-Cold War context. From there, there is a real acceleration, caused by the coming to power of Vladimir Putin. On the Chinese side, frictions are becoming clearer with the United States.

In 2001, Russia and China entered into a partnership and began a real strategic dialogue: the two countries set up Shanghai Cooperation Organization (SCO). This operation unites Russia, China, as well as four former Soviet republics in Central Asia: Uzbekistan, Kazakhstan, Kyrgyzstan and Tajikistan. Since then, the SCO has expanded with India, Pakistan and Iran. the year 2001 marks a turning point in this ability to work together. For two decades, Sino-Russian relations have been strengthened. We cannot speak of a deep and ancient alliance, but their rapprochement has accelerated in a spectacular way. Today, the two countries align on a large number of subjects. We find this cohesion in the votes at the UN Security Council, in the opposition of the two countries to the war in Iraq in 2003 and in the same hostility towards the West in general, and the States States in particular. Added to this, an exponential increase in economic and commercial exchanges between the two countries has developed.

How dependent are Russia and China on each other?

It is not a relationship of interdependence but a asymmetrical relationship. For example, the balance of power on trade issues is clearly to China’s advantage. This can generate frustration, especially with partners in Central Asia. They have become dependent on China from an economic point of view and they remain very attached to Moscow politically and strategically. We see rivalries and interests that are not shared between the two countries. On the other hand, China has every interest in seeing Russia be more isolated on the economic and commercial scene: this allows China to benefit from Russian raw material exports, and energy in particular, which it needs. For several years, we have observed an irresistible rise in power of China, both at the economic level and more recently at the strategic-diplomatic level.

China has no interest in breaking this dynamic. The instability of the world and of international relations could have an effect on its own growth and influence. We do not see any contemporary international conflict, even going back decades, that has been supported by China. The country is worried about conflicts and ruptures that can disadvantage it.

Against the backdrop of the war in Ukraine, Beijing does not support Moscow’s initiative. But at the same time, this is great news for China, which sees the Russia’s dependence on China’s economy swells more and more. Beijing is in a position of strength against Moscow. And we must not forget that China has an important interest in the region, which is materialized by the “16+1 dialogue”. This format of cooperation associates China and sixteen countries of Central and Eastern Europe. Beijing is the main economic and commercial partner of these different countries and this can be done to its disadvantage. An accumulation of insecurity in this area can have a completely perverse effect on China. There is no interest for Beijing to support this conflict. Moreover, China has offered to endorse a role of mediator and peacemaker.

Apart from emphasizing its friendship with Russia, China does not intend to get more involved in this war?

No, definitely not. And China has no interest in condemning the war either, because Russia’s isolation benefits her. China is far from the only country in the world that does not strongly condemn this conflict. And I’m not talking about the countries that have imposed sanctions because the list is even smaller! We tend, in the Western world, to start from the principle that we embody the world as a whole, but that is no longer the case today. India, for example, does not condemn this conflict because it needs its relationship with Russia. Brazil and South Africa were very discreet. The BRICS therefore did not condemn this war. Ditto for the multitude of small actors who diplomatically condemn the war as they expressed it during the vote at the General Assembly of the United Nations. It is symbolic condemnations only. They are not accompanied by the establishment of sanctions, nor by support for the sanctions regime.

No country in Africa, Latin America or ASEAN has initiated sanctions against Russia. It is therefore important to show that Moscow is not isolated. And behind this lack of convictions, China has everything to gain from posing as mediator and interlocutor in the war. This is part of China’s ambitions to want to play a more important role on the international diplomatic scene and to wish for a more peaceful, more multilateral world. Beijing sees the opportunity to accelerate the process of decline of the West to replace the United States as a peacemaker. We must stop believing that this conflict is renewing ties between Westerners: no, this war above all shows the isolation of the West and the decline of the United States on the diplomatic scene ! Twenty years ago, the United States would have been on the front line of this conflict and this is not the case today. And China is taking advantage of this leadership vacuum to assert itself.

In the future, what consequences will the Sino-Russian friendship have in international relations?

This rapprochement, which has been built slowly and accelerated over the past few years, is reflected in the desire of a counter model to the western model. You notice this when you take into account the power of China and Russia’s desire to become a great power again by regaining its aura on the world stage. But the rapprochement it has made with China is not not a covenant. The two countries are suspicious and will have to find a fair balance in the face of the risk of potential competition that may emerge between them. There is an unbalanced balance of power between Russia and China. Despite everything, there is a common ambition to turning the page on the international framework defined by Westerners.

Last February, we underestimated the importance of joint statement between Xi Jinping and Vladimir Putin, when the Russian president traveled to Beijing for the opening ceremony of the Olympic Games. This declaration in question is a one-page text, in which the two countries condemn the enlargement of NATO to the East. It is prophetic! This is the first time that China has taken an official position on security in Europe, outside of economic and trade issues. In this text against the United States, the two countries criticize what they consider to be the destabilizing character of Washington on strategic issues. And it looks like a true strategic partnership.

But we must not believe that a rapprochement between China and Russia will be limited to these two countries. A multitude of developing societies carry a stern look at the record of western leadership and will either endorse this Sino-Russian rapprochement, or attach themselves to it. I find that there is a lot of fantasizing about Russia’s isolation in the context of the war in Ukraine. Joe Biden told the US Congress on March 1 that Vladimir Putin was more isolated than ever. But that is unfortunately not true. Today, we are no longer able to isolate a country when it commits atrocities. And the composition of the partnership between China and Russia will be increasingly strong and will also extend to other players. As a result, the risk is to see the West isolate itself in turn.

Actor Bruce Willis, suffering from aphasia, puts an end to his career