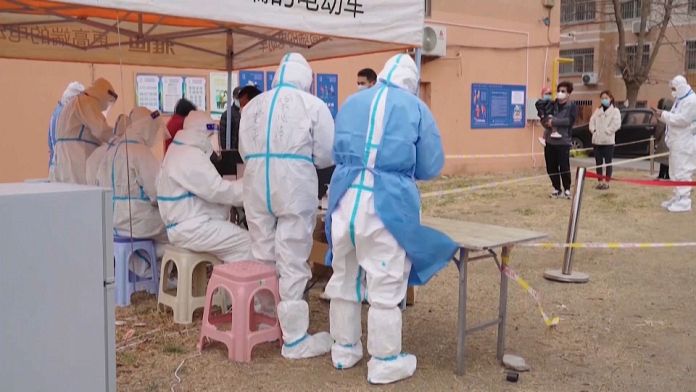 Chinese health authorities identified nearly 3,400 cases of coronavirus on Sunday, a record number since the start of the epidemic in February 2020, and were rushing to stem the outbreaks by confining the affected areas.

Due to a spike in cases across the country, authorities closed schools in Shanghai and locked down several cities in the northeast, while nearly nineteen provinces rush to contain local outbreaks due to the Delta and Omicron variants.

The great city of Jilinin the northeast, has been partially confined, with hundreds of neighborhoods put under bell jar, an official announced on Sunday March 13. Yanji, a city of 700,000 inhabitants on the North Korean borderwas fully contained.

The China, where the virus was first detected in late 2019, has applied a zero-tolerance policy to the outbreak. It reacts to epidemic outbreaks with local confinements, mass screening, and control of its population through tracing applications.

But this record of daily cases, caused by the Omicron variant, undermines this approach.

“The emergency response mechanism in some areas is not robust enough, the understanding of the characteristics of the Omicron variant is insufficient, and the judgment has been inaccurate“, admitted during a press briefing of the government Zhang Yan, health official of Jilin province.

“It also reflects the rapid rise of the virus in different regions and the lack of medical resources.“, causing delays in admitting hospitals and treating patients, he added.

The inhabitants of Jilinwho reported more than 500 cases of Omicron variant, had completed their six rounds of mandatory drug tests on Sunday, according to local authorities. On Saturday, several hundred neighborhoods in the city were confined.

Changchuna neighboring town and industrial base of 9 million inhabitants, was put under a bell on Friday.

The mayor of Jilin and the health officer of Changchun were removed from their posts on Saturday, state media reported, a sign of the political imperative for local authorities to tackle outbreaks.

China has so far managed to keep coronavirus cases very low thanks to localized lockdowns and mass testing and its closed borders.

But the weariness of this strict approach is increasingly heard in China. Several managers now advocate softer and more targeted measures to contain the spread of the virus, and economists are warning that the sweeping measures are hurting the country’s economy.

Health policy has generally been softer and more targeted since the rise in cases, which began in February, than in December, when the city ​​of Xi’an and its 13 million inhabitants had been fully confined for two weeks.

Faced with the increase in cases, the national health authority announced on Friday March 11 that it would introduce the use of rapid antigen testswhich could indicate a form of relaxation of the health policy of the Communist Party.

Last week, a top Chinese scientist said that the country should seek to live with the virus, as other countries have done. But the government has not ruled out the possibility of resorting to strict confinements.

Torrential rains in Ecuador: at least 24 dead and 12 missing