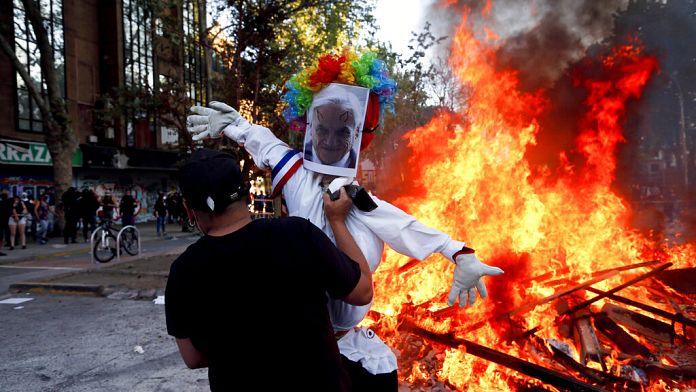 In Chile, the commemoration of the 2019 “s social uprising turned to riot and looting at the end of the day in several cities, such as Santiago. Barricades, stone throwing against tear gas and water cannons… According to an initial assessment by the authorities, at least 30 people were arrested and 5 police officers injured. During the 2019 protests, which lasted four months until the start of the pandemic in March 2020, 34 people were killed and more than 460 people were injured in the eyes.

The police estimated that between “8,000 and 10,000 people” walked the Plaza Italia in the capital Santiago, from where the revolt started in October 2019 that left more than thirty people dead.

“Things have not changed so much, but people are more awake, more ready to make their voices heard,” Valentina Sagredo, a 22-year-old student, told AFP among the thousands of protesters gathered in Plaza Italia.

In the fall of 2019, this square, renamed by the protesters “Dignity Square”, had been for weeks the epicenter of protests in the capital.

“There are still things to claim (…) that’s why people are protesting,” said Pablo, a 22-year-old barber, who did not want to give his name.

The Alameda, the capital’s main avenue, was closed, and shops and office buildings blocked their doors with metal fences.

The protests continued into the night, with bonfires in some streets and on the steps of Cerro Santa Lucia, one of the promenades in the center of the capital. A police station in Puente Alto, a working-class commune south of Santiago, was attacked with stones.

In Santiago, police dispersed protesters who had set fire to barricades with tear gas on Monday, AFP reported. A shop and a restaurant were looted, according to local media.

At least 5,000 police officers were mobilized throughout Chile.

The government condemned the violence provoked “by a group of offenders”.

“This afternoon we witnessed a massive demonstration in Plaza Italia, but we also witnessed a series of violent actions,” Interior Minister Rodrigo Delgado said from the Presidential Palace in La Moneda.

“There is no justification for this violence and we condemn it. Many more of us want to live in peace,” he added.

In October 2019, the harsh crackdown on protests led to international accusations of human rights violations against the Piñera government.

The Santiago metro fare increase had been the trigger for the first student protests on October 18, 2019, but the demands quickly broadened against the entire Chilean economic model, criticized for favoring an elite, and an absent state on social issues like education, health and pensions, inherited from the dictatorship of Augusto Pinochet (1973-1990).

This second anniversary of the “social explosion” coincided with the beginning of the drafting of the new Constitution, to replace the current one, inherited from the dictatorship of Augusto Pinochet (1973-1990) and considered a brake on any substantive social reform.

The president of the Constituent Assembly elected in November, Elisa Loncon, hailed a “symbolic day, a day when Chile and its citizens won by unity”.

After several months of implementation, it began on Monday the drafting of the new articles of the future Basic Law which will be submitted to a new referendum in 2022.

The anniversary of this social explosion also comes in the middle of the campaign for the general elections of November 21.

Conservative President Sebastian Piñera, 71, who led the country between 2010 and 2014 and then since 2018, cannot stand for re-election.

Cinema: inauguration of the El Gouna festival despite a violent fire