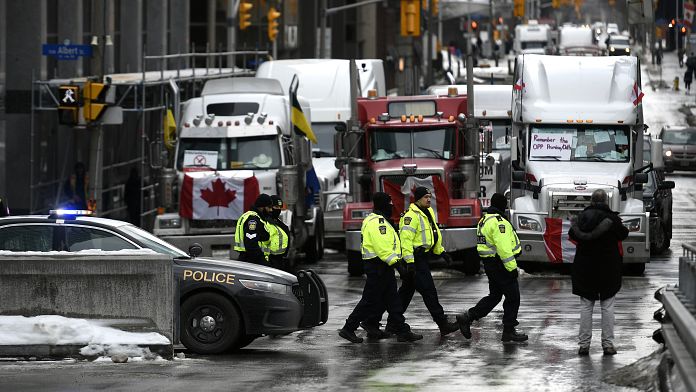 The Superior Court of Ontario on Friday ordered the departure of anti-sanitary measures protesters who have paralyzed a major border axis with the United States for several days, a blockage which prompted Washington to intervene with the Trudeau government.

“Injunction accepted. The judge ruled that the demonstrators must leave before 7:00 p.m.” local (0000 GMT Saturday), tweeted Drew Dilkens, the mayor of Windsor, the city where the bridge is located.

At 11:30 p.m., however, it was still blocked by demonstrators and the police had not intervened, noted an AFP journalist.

The closure, since Monday, of this major border axis, which connects Ontario and the American city of Detroit in the United States, has already caused disruptions for the automotive industry on both sides of the border.

Washington had put the Canadian government under pressure Thursday by asking to use “federal powers”. And on Friday, in a phone call with Justin Trudeau, US President Joe Biden spoke directly about “the serious consequences” of the lockdown for the US economy.

More than 25% of goods exported between the United States and Canada transit there.

A few hours later, Justin Trudeau indicated that the borders were “not going to remain blocked”, promising to intensify police repression.

If he indicated that “all options“were”on the table“, the Prime Minister also clarified that he is not ready to deploy the army immediately, “a solution of last, last resort”.

On Friday morning, the Prime Minister of Ontario, the province where the Ambassador Bridge is located but also the federal capital Ottawa, declared a state of emergency.

“We will take all necessary steps to ensure the border is reopened. And to the beleaguered residents of Ottawa, I say, ‘we are going to make sure you can get back to normal life as soon as possible,'” Doug Ford said during of a press conference.

Two other border axes are also blocked: the first, at Emerson, connects the province of Manitoba to North Dakota, while the second is located in Alberta.

This pressure from the powerful American neighbor was added for Justin Trudeau to that of the Canadian opposition parties, which accuse the Prime Minister of inaction in the file.

Mr. Trudeau must “act so that this ceases peacefully and quickly”, reiterated Candice Bergen, the interim leader of the Conservative party.

“It is unacceptable that a Prime Minister of a G7 country, one of the most powerful countries in the world, does not act, does not show leadership to resolve this situation.“, denounced Jagmeet Singh, leader of the New Democratic Party (NDP).

“The problem is that initially Justin Trudeau threw fuel on the fire by framing all the protesters in the same bag, then he remained silent for five days and now he does not seem to take responsibility“, explains Daniel Béland, political scientist from McGill University in Montreal.

In the streets of Ottawa, the crowd of demonstrators was more massive than in recent days and a stage was set up in front of parliament, noted an AFP journalist.

Matt Lehner, who hung a Canadian flag on the end of his hockey stick, said he was “not worried”. “We stand up for what we believe in, we don’t break any laws,” he told AFP, sitting on a folding chair in front of parliament waiting for the “thousands” of Canadians who will join them this weekend. end.

“We are peaceful. We’re not here to be hateful, we want freedom of choice back“, adds Jessika Dusseault, 34 years old. This bus driver is installed with her trucker husband, their two children of three years and ten months and their dog in the street which passes under the windows of Justin Trudeau.

The city police again explained Thursday that they were “not able” to “put an end” to the demonstration without reinforcements.

And Ottawa is again expecting an influx of demonstrators for the day on Saturday. Some have also promised to demonstrate in other major Canadian cities such as Montreal or Toronto but also elsewhere in the world and in particular in France.

Thousands of opponents of health restrictions made their way to Paris on Friday, but no convoy entered the capital, according to the authorities, determined to prevent any blockage.

Inspired by the mobilization in Canada, the organizers denounce the vaccination pass which came into force on January 24 and claim to be “yellow vests”, a popular protest movement of 2018-2019 triggered by a rise in gasoline prices, and which had turned into a revolt against President Emmanuel Macron.