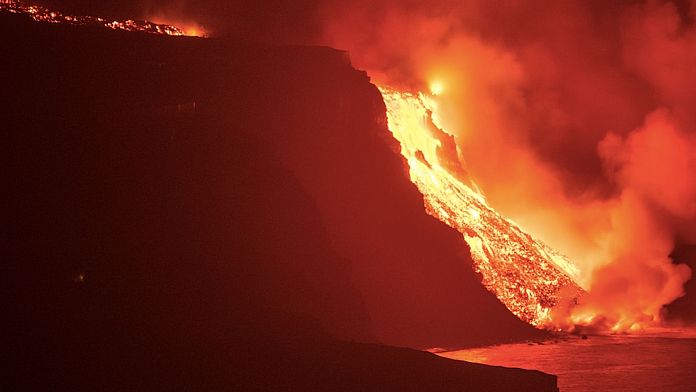 Nearly two weeks after the Cumbre Vieja volcano”s eruption began, a new flow of highly liquid lava appeared on Friday on the Spanish island of la Palma. This is the third. An impressive river of incandescent lava that makes its way on charred ground.

It is added to the lava that continues to accumulate in the Atlantic Ocean, forming a vast platform of magma. According to La Palma authorities, its area now exceeds 20 hectares.

Should we evacuate La Palma?

The destructive journey of lava to the sea a ddestroyed 744 buildings and forced some 6,000 of the 85,000 inhabitants to evacuate, according to Spanish media. The air quality is closely monitored, as the release of toxic gas is of concern to residents. In order to avoid poisoning, a security perimeter with a radius of 3.5 kilometers and a maritime exclusion zone of two thousand sailors were set up at the place where the lava joined the ocean. A total evacuation of the island is still not envisaged but the authorities of the island have asked the inhabitants of several neighborhoods to remain caulked in their homes.