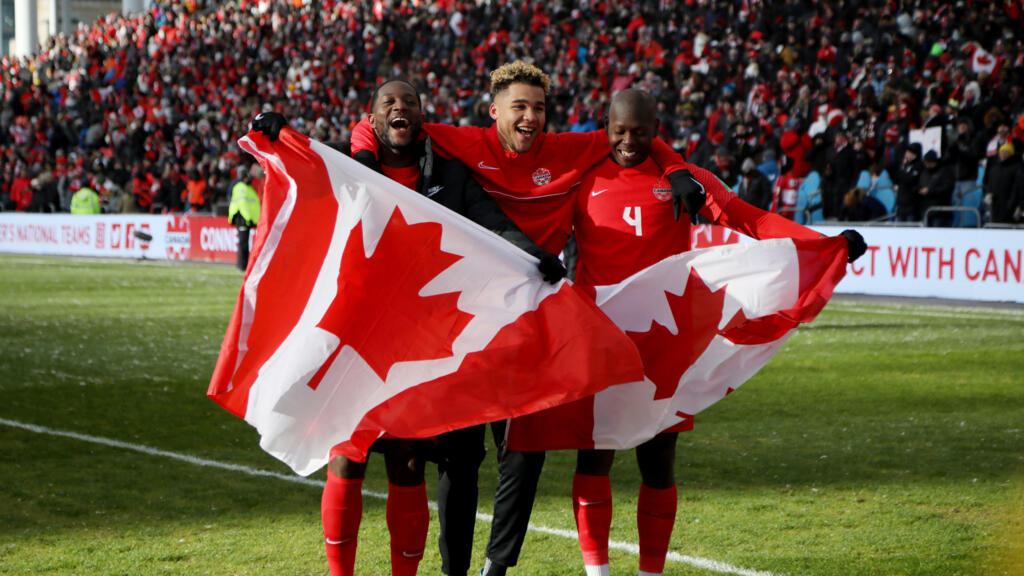 Canada will return to the FIFA World Cup, thirty-six years after its last participation. Thanks to its victory (4-0) against Jamaica on Sunday in Toronto, the North American team obtained its qualification for the World Cup organized in Qatar during the penultimate day of qualifying for the Concacaf zone.

the Canada will take part in the second World Cup in its history. Thirty-six years after their first appearance in the World Cup, the “Canucks” obtained their ticket on Sunday March 27 for the competition organized in Qatar beating Jamaica 4-0 on the penultimate day of qualifying for the Concacaf zone.

With one day remaining in the playoffs, the Canadians are guaranteed to finish in one of the top three places in the standings, which opens the way to direct accession. They can no longer be caught by the fourth, Costa Rica who won (2 to 1) in El Salvador.

“We’ve been through some tough times. But I’ve got an amazing group of players. And we’ve got talent. I’m just happy for these guys. When I took over the team and said ‘ We are going to qualify for the World Cup. I don’t think many believed me,” reacted coach John Herdman.

“Canada is a footballing nation and we better believe it. We’re going to keep pushing forward. We’re just getting started,” he added.

Frustrated at having missed the boat on Thursday in Costa Rica, where they conceded their first loss of this phase (1-0), they made it a point of honor to finish the job with fireworks, in front of their audience. white-hot in the still freezing cold of Ontario.

Striker Cyle Larin, found in the box by midfielder Stephen Eustaquio, opened the scoring from the 13and minute, exploding with joy nearly 30,000 down jackets and red hats.

The goalscoring opportunities then multiplied, Larin, Jonathan David and Tajon Buchanon, lacking precision in the last gesture. The latter still doubled the mark before the break, receiving a center badly returned by the opposing defense.

Back from the locker room, David, the Lille striker (L1) still lacked precision after an ideal service from Larin (49and), then Canada slowed down slightly, in order to be unnecessarily countered by wanting to score more.

John Herdman then brought in some new blood for the substitutes to join the party, and Junior Hoilett added the third goal with a sharp after a pass from Buchanon (82and). Then, the Jamaican gave even more pace to the score, scoring against his side (88and).

A draw was enough for the Canadians to qualify for their second World Cup, after the one played in Mexico in 1986. During this competition, they had inherited Group C made up of France, the USSR and Hungary. After losing against the Blues in their first match (0-1), they were also beaten by Hungary (2-0) and the USSR (2-0). The Canadian team had left the competition after the group stage without having scored a single goal, and having conceded five.

At the final whistle of the game against Jamaica, Canadian defender Alphonso Davies broke down in tears on Sunday in front of his computer screen and repeatedly repeated “Oh my god”. The Bayern Munich player, away from the field since mid-December, followed the qualification of his national team from a distance.

More than three months after his last match, the footballer, who contracted Covid-19 and was diagnosed with myocarditis (heart inflammation), will soon return to training and hopes to be on the trip to Qatar. “I’m happy to be back and to be able to train again. The rehabilitation is going well so far,” he told the German club’s website on Sunday. “I don’t have any muscle or heart issues, but I’m not 100% yet.”

For their part, the United States, easy winners of Panama (5-1), thanks in particular to a hat-trick from Christian Pulisic who scored two penalties, are second in the group. And Mexico, which won (0-1) in Honduras, remains third.

They each have 25 points, or 3 more than Costa Rica, which also has a general goal difference (the first criterion in the event of a tie, the best attack coming second) which is very unfavorable compared to that of the Americans (+13/+3) and a little less unfavourable, but difficult to fill, compared to that of the Mexicans (+7/+3). It would therefore take a fairly large victory for the Costa Ricans against the United States on Wednesday, combined with a fairly large defeat for Mexico against El Salvador, to see them climb to third place thanks to the “goal-average”.

The twenty countries so far qualified

After the qualification of Canada, 20 of the 32 tickets for the World Cup in Qatar have so far found takers. In addition to the automatically qualified host country, ten European selections, four South Americans, four from the Asian zone and one North American are guaranteed to participate in the competition.

Basketball – NBA: This rookie declares his love for LeBron James!

Mohamed Magassouba, an interim who lasts at the head of Mali

French clubs on a mission to save the UEFA index