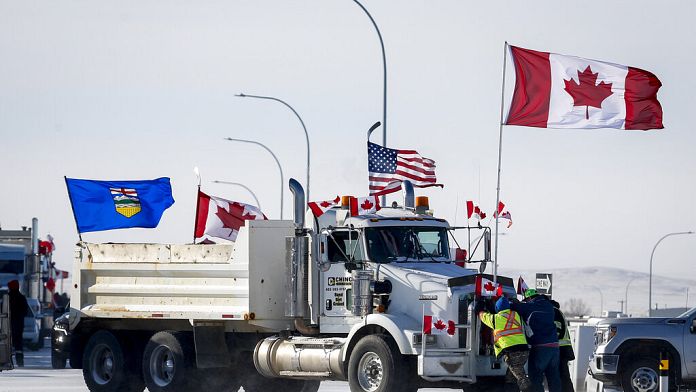 Faced with the determination of the demonstrators who block the center of the capital Ottawa for more than ten days, a movement seemed to be underway on Tuesday in Canada to relax the health restrictions against Covid, among the strictest in the world.

In central Ottawa, between 400 and 500 trucks still occupied the streets on Tuesday to oppose sanitary measures, a situation “out of control” for the city which triggered a state of emergency this weekend.

Prime Minister Justin Trudeau, who remained silent for several days, denounced the movement on Monday and felt that it was necessary that “it ceases”.

“We are all tired of the restrictions, of having to make sacrifices almost every day, but our responsibility as a government is to ensure everyone’s health and safety”he said in the House of Commons on Tuesday.

However, some provinces have announced new reductions: thus, the Saskatchewan and thealbertaare going to give up the vaccine passport altogether, believing that “the benefits no longer outweigh the costs”.

And for the first time since the implementation of new restrictions linked to the Omicron wave, Quebec has announced a detailed timetable for the relief to come.

Concerns over the blocking of the Ambassador Bridge

Although the epicenter is in Ottawa, the whole country is shaken by this movement. baptized “freedom convoy”it was originally intended to protest against the decision to oblige truckers to be vaccinated to cross the border with the United States.

But it quickly turned into a movement against health measures as a whole and against the government.

Outside Ottawa, the movement continues to spread: the Ambassador Bridge, a vital trade route between North American neighbors, which connects Ontario to Detroit, in the United States, was blocked by demonstrators.

A situation that could have “serious consequences on the economy” if it persists, alert authorities and companies. This suspension bridge is crucial for the automotive industry but also for American hospitals which employ many Canadian nurses.

In the streets of central Ottawa, known for being a very calm city: signs against Justin Trudeau, Canadian flags, but also fires around which the demonstrators warm up. On the sidewalks or in the middle of the roads: makeshift shelters, a few tents and around them, supplies of water and food.

According to the police, one in four truck drivers came to demonstrate with their children, which makes their evacuation even more complex, especially since some have removed their tires and others have modified their brakes to “immobilize their truck”.

On Tuesday, truckers, who have been banned since the day before from honking after a court decision, found another way to be heard: to roar the engines of their trucks, making the air unbreathable.

Recently, the movement has also inspired beyond borders: New York, several hundred municipal employees demonstrated against compulsory vaccination; in New Zealand, a convoy blocked the streets around Parliament in Wellington on Tuesday; in Francethousands of opponents of the vaccine pass have announced that they want “rolling in Paris” Saturday.