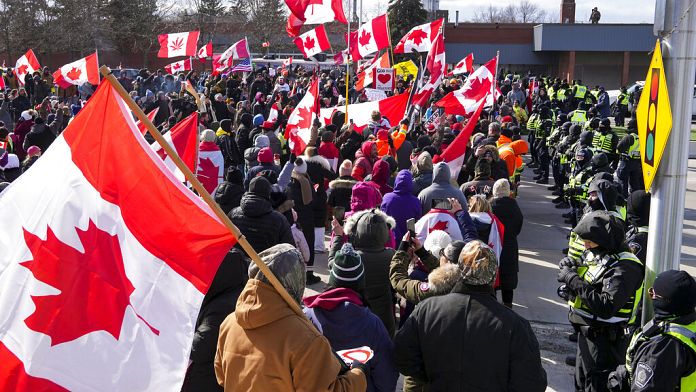 The establishment of the state of emergency did not discourage them: the anti-sanitary measures demonstrators were still thousands on Saturday in the streets ofOttawa and continued to block a strategic border bridge with the United States despite the intervention of the police.

The mobilization continues at the Ambassador Bridge

For the first time since the start of the movement, the police took up position in large numbers near one of the hot spots of the protest: the Ambassador Bridge, which connects Windsor, Ontario to the US city of Detroit. The day before, the Superior Court of Ontario had ordered the departure of the demonstrators who had been there for five days.

The blocking of this essential axis has pushed Washington to intervene with the government of Justin Trudeau. And the latter had promised Friday increased police repression because the “borders cannot remain closed” and a state of emergency has been declared in Ontario.

But at the beginning of the evening, the police had still not managed to completely free the bridge after hours of face-to-face with the demonstrators. Most of the trucks and vehicles that were blocking the road have been moved, noted an AFP journalist. But there were still several hundred demonstrators on the spot.

The goal is to defuse the situation “peacefully” and through mediation, Jason Bellaire of Windsor Police told reporters, unable to confirm whether the bridge would be permanently evacuated at the end of the day. No arrests were made immediately.

The closure of this bridge is causing serious concern on both sides of the border and has already caused disruption to the automotive industry. More than 25% of goods exported between the United States and Canada transit there.

Two other border axes are also blocked: the first, at Emerson, connects the province of Manitoba to North Dakota, while the second is located in Alberta.

“We can last for months”

Saturday, for the third consecutive weekend, the crowd was there in the streets of the federal capital Ottawa, epicenter of the movement.

Music, horns, dance floors and stands for coffee… there were thousands marching and celebrating in the streets of the city center where very few police officers were deployed, noted an AFP journalist.

“I am not vaccinated and I am not dead”recount Marc-Andre Mallette38, who says he has supported the cause “from the start”.

John Pacheco, who comes three times a week to demonstrate, took her 15-year-old daughter on Saturday. This “catholic activist” is convinced that the movement will last: “They’re not going to crack down, they’re not going to bring in the army, they don’t have the equipment to move all these trucks. So we could be here for months.”.

Starting from the departure of truckers opposed to the vaccination obligation to cross the border with the United States, the protest has extended to broader claims against all health measures but also against the government of Justin Trudeau.

But in a country where health measures are in most provinces more restrictive than elsewhere in the world, the movement has received wider popular support than anticipated by the authorities.

Since the start of the movement, three central Canadian provinces have announced the abandonment of the vaccine passport and the mask in the coming weeks. But this is not the case for the two most populated provinces of the country: theOntarioepicenter of the protest, and the Quebec.

Jerusalem: Israeli police destroy the house of a Palestinian family