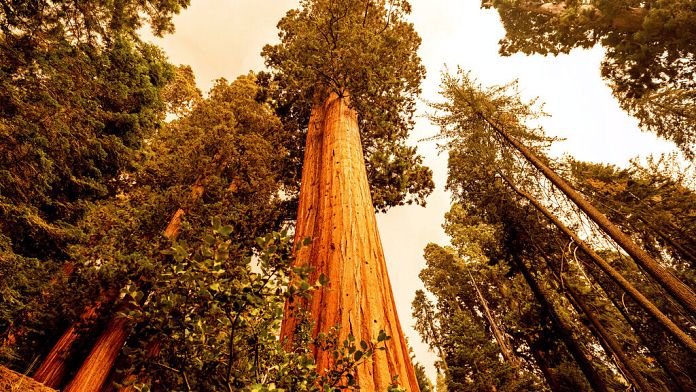 Rescuers were hopeful Friday that they could save the world”s most imposing trees, the giant sequoias of California, threatened in recent days by the progress of a nearby fire.

“We have hundreds of firefighters deployed on the area, who are giving their all,” said AFP Mark Garrett, spokesman for the California firefighters who are fighting the fire called “KNP”. Fusion of two lightning fires a week ago at the gates of Sequoia National Park in central California, it has already consumed some 46 km2 of vegetation.

“Our biggest challenge was the (steep) terrain. But we did not have to face an explosive fire, the flames decreased in intensity, which allowed us to progress,” he explained.

The Redwood National Park is home to about 2,000 giant sequoias, which grow only in this region of the world and are considered the largest trees in existence today.

Firefighters have carried out in recent days brush-cutting and other improvements to preserve these colossi, some 2,000 to 3,000 years old. They even draped with a fireproof protective cover the base of the most iconic of them, christened “General Sherman”. 83 meters high and with a diameter of 11 meters at its base, it is considered by experts to be the most voluminous tree in the world.

The approximately 600 mobilized firemen, supported by air, also deployed equipment to keep the flames out of the natural park, which remains closed to the public.

The” Giant Forest ” of Sequoia Park, home to five of the largest known trees in the world including the “General Sherman”, normally attracts tourists from all over the world.

“If the flames ever really reach the forest, we’re ready,” Garrett said.

Low intensity fires are usually not enough to harm the giant sequoias, “naturally adapted” to these disasters with their very resistant bark, which can reach up to a meter thick.

“It’s really hard to burn these trees whose first branches can grow thirty meters high”, out of reach of the flames. “They’ve seen a lot of fires,” says Garrett.

On the contrary, these redwoods need fires to reproduce: the heat of the flames bursts cones that have fallen to the ground like popcorn to release hundreds of seeds.

But these giants that grow only in California, in the foothills of the Sierra Nevada, are not adapted to survive the more intense fires that have tended to declare in recent years in favor of climate change.

In August 2020, a violent fire called “Castle Fire” had ravaged 700 km2 of Sequoia Park. According to an analysis by satellite imagery, between 7,500 and 10,000 redwoods have been destroyed by the flames, or at least 10% of the world population of this species.

The chronic drought in the western United States and the lack of controlled fires, started to limit the proliferation of brush and undergrowth, are partly to blame, said the fire department spokesman.

“That’s what put us in this situation, with too much tree density, which is not healthy. When a fire occurs, it goes wild, with totally extreme behaviors,” he added.

Fortunately, such ecobuages (controlled fires) have been conducted over the past 25 to 30 years in the “Giant Forest,” Garrett adds.

Thousands of km2 of forests have already burned this year in California. The number and intensity of fires has increased in recent years throughout the western United States, with a very significant lengthening of the fire season.

According to experts, this phenomenon is related in particular to global warming: the increase in temperature, the multiplication of heatwaves and the decrease in precipitation in places form an ideal incendiary cocktail.

The Dixie Fire, started in mid-July in northern California, is still burning and has already traveled nearly 3,900 km2. It is about to become the largest fire in the history of the state.