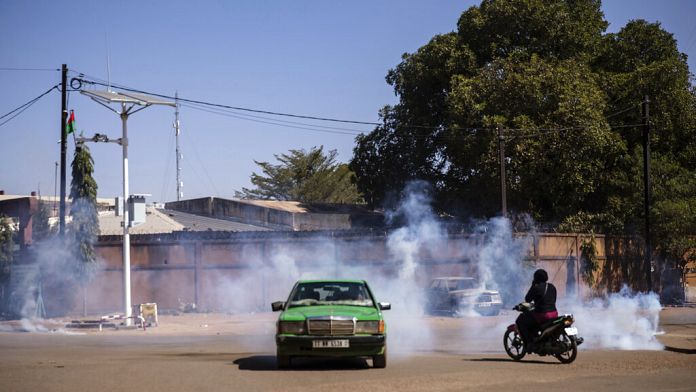 Soldiers mutinied on Sunday in several barracks in Burkina Faso to demand the departure of army chiefs and “appropriate means” to fight against the jihadists who have struck this country since 2015. President Roch Kaboré was reportedly arrested and taken to a military camp.

These mood swings in the barracks of Burkina, a country that has experienced several coups and putsch attempts in the past, illustrate the fragility of the president’s power Roch Marc Christian Kabore in the face of the jihadist violence which is increasing in his country and which he is unable to counter.

Throughout the day, demonstrators gave their support to the mutineers and set up makeshift roadblocks in several avenues of the capital, before being dispersed by the police, noted AFP journalists.

“Heavy gunfire“were heard from the middle of the night and continued for part of the day in several barracks in Ouagadougou – including the air base -, Kaya and Ouahigouya, in northern Burkina, according to residents and military sources. .

Residents of the Gounghin district of Ouagadou said that soldiers from the Sangoulé Lamizana camp came out of their barracks, firing shots in the air, and cordoned off the perimeter around the barracks.

On Sunday afternoon, around 40 soldiers outside the barracks fired into the air nearly several hundred jubilant people carrying Burkina flags and blowing vuvuzelas, who had come to support them, a observed an AFP journalist.

The perimeter around the air base barracks was also cordoned off with hooded soldiers firing into the air.

“We want means adapted to the fight“anti-jihadist”and substantial staff“, as well as the “replacement“of the highest ranks of the national army, indicates in an audio recording sent to AFP a soldier from the Sangoulé Lamizana barracks, on condition of anonymity.

He further wished “better care for the injured“during the attacks and fights with the jihadists, as well as”families of the deceased“.

At no time did this soldier demand the departure of Burkinabe President Roch Christian Kaboré, accused by a large part of the population of being “unableto counter jihadist groups.

These claims were confirmed by other military sources and discussions took place between representatives of the mutineers and the Minister of Defense, General Barthelemy Simpore, according to a government source. Nothing had filtered Sunday evening on the content of the meeting.

In the morning, a hundred people who tried to gather at Place de la Nation, in the center of Ouagadougou, to express their support for the movement of soldiers, were dispersed with tear gas by the police, AFP noted. .

Later in the day, supporters of the mutinous military set fire to the headquarters of the ruling party in the capital before being dispersed by the police, according to AFP, which also noted that mobile internet was cut on Sunday in the city. morning.

Calm had returned on Sunday evening to the streets and barracks of Ouagadougou, but President Kaboré decreed “until further notice“, from Sunday, a curfew from 8:00 p.m. to 5:30 a.m. (local and GMT).

Schools will also remain closed on Monday and Tuesday, according to the government.

The Sangoulé Lamizana camp shelters the House of arrest and correction of the armies (Maca) where General Gilbert Diendereclose to former President Blaise Compaoré overthrown in 2014 who has since lived in Côte d’Ivoire.

General Diendéré was sentenced to 20 years in prison for an attempted coup in 2015 and is currently on trial for his alleged role in the assassination of former President Thomas Sankara, a pan-African icon, in 1987.

“No institution of the Republic has yet been worried“, said General Barthélémy Simporé, in an intervention on television.

These movements in the barracks come the day after new demonstrations of anger from residents exasperated by the powerlessness of the authorities to deal with jihadist violence.

On Saturday, incidents erupted in Ouagadougou and other cities across the country between law enforcement and demonstrators who defied a ban on gathering to protest insecurity.

As the mali and the Niger neighbours, the Burkina Faso is caught in a spiral of violence attributed to armed jihadist groups, affiliated with Al-Qaeda and the Islamic State group.

Attacks targeting civilians and soldiers are increasingly frequent and mostly concentrated in the north and east of the country.

The violence of jihadist groups has killed more than 2,000 people in nearly seven years and forced 1.5 million people to flee their homes.

The Community of West African Countries of the ECOWAS said he was following “with great concern the situation in Burkina Faso” and expressed in a press release “his solidarity with President Roch Marc Christian Kaboré, the government and the people” of this country.