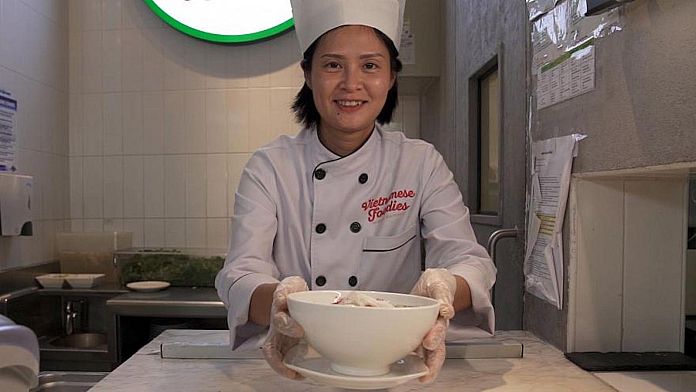 Over 5,000 Vietnamese nationals and people of Vietnamese descent live in the United Arab Emirates. Their culture and passion for cooking has incorporated Dubai’s traditional dining scene.

Jumeirah Lakes Towers (better known as JLT) is one of the most popular restaurant districts in the emirate. This is where you will find one of the three branches of Vietnamese Foodies, a concept by Lily Hoa Nguyen. One of the emblematic dishes of his country, Vietnam, is on his menu: phô. The chef explained to us how it is an integral part of Vietnamese eating habits.

“The Vietnamese cannot survive without pho!” she assures. “It’s a dish that you can find all over the world, where Vietnamese live,” she says.

Many ingredients that go into its preparation are easily found in the United Arab Emirates such as mint and cilantro. But to make the dish as authentic as possible, Lily Hoa Nguyen imports many spices directly from Vietnam like cardamom, cinnamon and star anise. She claims that “This allows the dish to taste exactly the same as in Vietnam.”

In the north of the country, the taste of pho is simple and more suitable for traditional palates while in the south, it is distinguished by multiple flavors, especially spicy. Proud to be from Ho Chi Minh City, in southern Vietnam, the chef explains that she “likes to find a lot of texture, color and taste” in what she eats.

The key to a good pho is apparently the broth. In the north, the bones used to make the broth are not roasted. This gives the broth a less brown tint. Lily Hoa Nguyen tells us that the choice of bones to prepare it is essential and can considerably improve the taste of the dish. It indicates: “Don’t use just any bone, you have to use a hock bone that has more marrow. It will make your broth taste better,” she asserts.

If this is your first time making pho, the chef suggests avoiding the common mistake of not using enough bone in the broth. She adds that “Having more bone will give the broth a deeper flavor.”

The recipe for Phô Bò Chín (for four people)

2.3 liters of beef broth (recipe below for broth)

11. A handful of Thai basil

12. A handful of long cilantro aside

Add 1 kg of beef shank in the beef broth for 1 hour, putting on medium heat until cooked, but not too soft.

Remove the meat and cut it into slices 3 mm thick.

Toast the spices (cinnamon, coriander seeds) in a hot pan for 2 minutes to bring out the taste.

Place them in a tea bag and then put it in the broth. Note: You need to do this step only 30 minutes before serving.

Finally, season the broth with black pepper, salt and the fish sauce.

Cook the rice noodles as directed on the package.

When ready to serve, reheat the noodles, then pour the boiling broth over them.

Add as a garnish, the slices of meat, chopped green onions, bean sprouts and serve piping hot with Thai basil on the side.

Beef broth (for 4 people) for the pho

Peel and wash the onion.

Roughly cut it into large pieces.

Toast the ginger, then remove the burnt skin and crush it lightly.

Roast the star anise and cardamom.

In a medium saucepan, add the roasted beef bones, water, onion and ginger, star anise and cardamom, bring to a boil, then put on low heat.

Add the salt, then simmer the broth for 6 hours. Let it cool and filter it before using it.

The cruise industry is picking up in Dubai

A house built upside down in Romania

Dubai golf courses are a hit