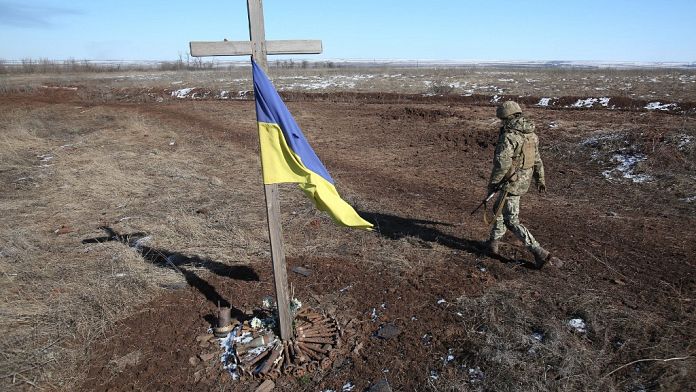 Update at 9:15 a.m. on the situation in Ukraine

Bombings in the west of the country

Russian forces on Sunday morning shelled a military base in the Lviv region, located in western Ukraine near the Polish border and so far relatively spared from the conflict, authorities said.

“The occupiers carried out an airstrike on the International Peacekeeping and Security Center. According to preliminary information, they fired eight missiles”the Lviv regional administration said in a statement.

Our special correspondent, Anelise Borges, is currently present in Liviv. She heard a loud explosion in the night.

In addition, the mayor of Ivano-Frankivsk, a city located about a hundred kilometers south of Lviv, said that a “strike” had targeted the airport of this locality early Sunday.

“The explosions that occurred this morning are due to a strike on the airport. We are in the process of establishing all the facts”said on his Facebook page Ruslan Martsinkiv.

The Russians are trying to encircle Kiev

Kiev, whose only roads to the south remain clear, is increasingly surrounded by Russian soldiers, who destroyed the nearby airport of Vassylkiv on Saturday, according to the Ukrainians.

Present in the suburbs, the Russian troops are trying to neutralize the surrounding localities to “block” Kiev, according to the Ukrainian general staff.

The British Ministry of Defense estimates that the Russian forces were on Saturday 25 kilometers from the capital and that a column north of the city had dispersed, reinforcing the idea of ​​a desire to encircle. The Ukrainian presidency promises a “relentless defense” of Kiev.

The Russian army continues to shell the south of the country where the besieged city of Mariupol hopes for the arrival of a convoy of humanitarian aid.

This convoy remained blocked for more than five hours at a Russian checkpoint on Saturday, and the hope was that it could reach Mariupol this Sunday, coming from Zaporozhye via Berdiansk, Ukrainian Deputy Prime Minister Irina Vereshchuk said on Saturday.

The stakes are crucial for Mariupol: this strategic port city, located in the south-east of the country between the Crimea and the Donbass, is plunged into an “almost hopeless” situation according to Médecins sans frontières (MSF), lacking food and deprived water, gas, electricity and communications.

The Ukrainians who had announced that a mosque in Mariupol housing 80 civilians had been bombed were denied on Saturday by an official of this institution. The mosque area was under fire but the mosque itself was not hit, according to the official.

The Russian president spoke of “extrajudicial assassinations of opponents”, “civilian hostage-taking” and their “use as human shields” as well as the deployment of heavy weapons in residential areas, near hospitals, of schools and kindergartens,” the Kremlin said.

These accusations are “lies”, reacted the French presidency following this exchange.

Total lunar eclipse: how to observe this rare phenomenon?

D-Day for the Beijing Winter Olympics despite the many controversies