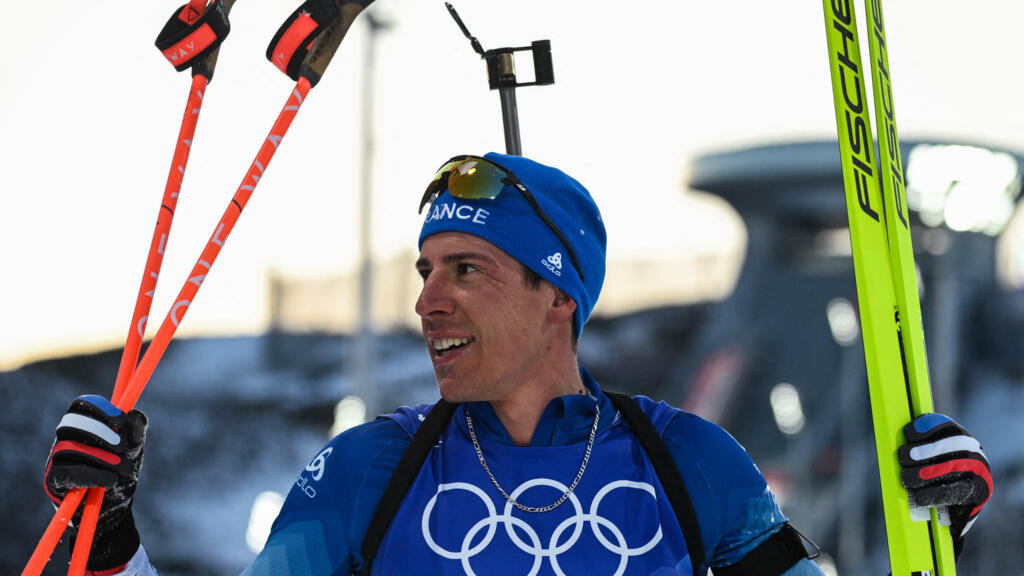 Quentin Fillon-Maillet dominated the individual race in biathlon at the Beijing Olympics on Tuesday. He won the first gold medal for the French delegation and his first title at the Olympic Games and thus followed in the footsteps of the champion, Martin Fourcade.

He was one of the great medal hopefuls. Long in the shadow of Martin Fourcade, Quentin Fillon Maillet wrote his own story by winning his first Olympic title on Tuesday February 8 in the individual (20 km) of the 2022 Olympics, which he flew over despite two penalties. in shooting.

Quite a symbol: among the first to congratulate Fillon Maillet, the one who inspired him and for a long time embodied biathlon in France, Martin Fourcade, who gave him a warm hug at the edge of the Zhangjiakou stadium.

The 29-year-old from the Jura obtains the first title of his career at the Olympics and offers the French the first French gold medal of these Olympics.

France could even have won a second gold medal on Tuesday, but the Frenchwoman Tess Ledeux was finally overtaken by the Chinese Eileen Gu, who won the first Olympic title awarded in big air skiing.

“He never gives up”

Four years after Martin Fourcade’s raid at the Pyeongchang Olympics (three titles including two solo), Fillon Maillet is following in the footsteps of the biathlon legend, who retired in 2020. Fourcade was also the only Frenchman to have imposed in the individual at the Olympic Games (in Sochi in 2014).

In an event that is not his specialty, however, the Habs showed unfailing confidence, like what he has shown on the circuit since the start of the season. The leader of the World Cup, very comfortable on the track, limited the breakage on the shooting range while the individual punishes each fault with the rifle with a one-minute penalty.

“It was great, great Quentin. It was on the track that he went to get this title. He was never the most gifted but he never gives up and he always believes in himself. It’s the victory of the work he has put in place for years,” reacted Vincent Vittoz, the coach of the Blues.

Victorious eleven times in the World Cup, Fillon Maillet had so far remained empty-handed on an individual level in the major championships (Olympic Games, Worlds). But the Frenchman, long in the shadow of Fourcade and Johannes Boe, has taken on a new dimension this season (five successes) and, barring an accident, the big crystal globe should not escape him.

The gold harvested on Tuesday confirms the exceptional density of the French biathlon team, both for men and women. In three races contested since the start of these Games, France has obtained three podiums (gold for Fillon Maillet, silver for Anaïs Chevalier-Bouchet and the mixed relay).

And the best is yet to come with, at the end of the week, the sprint-pursuit diptych, which usually smiles much more on the French, and the relays, where they are favorites with Norway.

This title is also a form of revenge for Fillon Maillet, four years after a 2018 edition of the Olympic Games disputed in very complicated mental conditions. He had embarked for Pyeongchang while his companion was suffering from an illness and a few days after the death of his father-in-law and had completely missed out on the Olympic meeting.

Villarreal resists Bayern Munich and advances to the semi-finals