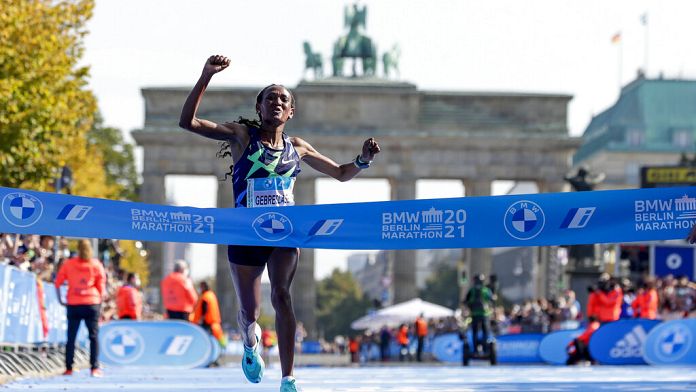 Bekele lost his bet. Set to break Kipchoge”s world record, the Ethiopian took only third place on Sunday in the Berlin Marathon, won by his compatriot Guye Adola in the average time of 2 h 05 min 45 sec.

“My preparation had not been perfect, I had Covid nine months ago, and I had doubts before the race, “he admitted after finishing in 2h 06min 47sec,” but for the future I am really confident in my abilities. My plan is not just to break the world record, I want to go even further”.

Asked about the possibility of going under the mythical two-hour mark, Bekele did not hide his ambitions: “One day I will try, he said, I know it will be very hard, but I have confidence”.

“My feet were burning”

No man has achieved this feat in competition so far. Kenyan Eliud Kipchoge, who has held the official world record of 2h 01min 39sec since Berlin-2018, however broke the psychological barrier by running 1h 59min 40sec in October 2019 in Vienna, during an event organized especially for him in conditions not homologated by the world governing bodies of athletics.

On this ultra-fast course in the German capital, where the world record has already been broken seven times in the twenty-first century, Bekele, who had given up in extremis to line up in London a year ago and was not at the Tokyo Games, had asked his hares to lead a hell of a train from the start. In 2019, he fell two seconds short of Kipchoge’s record.

The small group of favorites went to the semi in 1h 00min 48 sec, but the heat that invited itself in the second hour broke the tempo from the 25th km.

“It was so hot that my feet were burning in my shoes,” said winner Adola at the finish.

For this 30-year-old runner, Berlin remained a good memory. He had shone there in 2017, succeeding that year a smashing entry on the great stage of the world marathon.

This half marathon specialist (best time 59 min 06 sec), almost unknown to the general public at the time, was then discovering the 42.195 km, and had threatened to the surprise of the great Eliud Kipchoge, whom he still beat by a few strides in the 40th kilometer.

Adola finally finished in 2 hours 03 min and 46 sec, the best performance in history for a beginner over the distance. This time has remained since his personal best.

The athlete, who has been training since 2014 in Addis Ababa in the group of Italian manager Gianni Demadonna, still ran 2h 04 min 42 sec in Valencia-2019, after a poor performance in London. Berlin was this year the fourth marathon of his career.

In a sign of a cautious return to normal, Berlin was the first of the six “majors” of the marathon open again to the general public after the pandemic, with 25.000 starters.