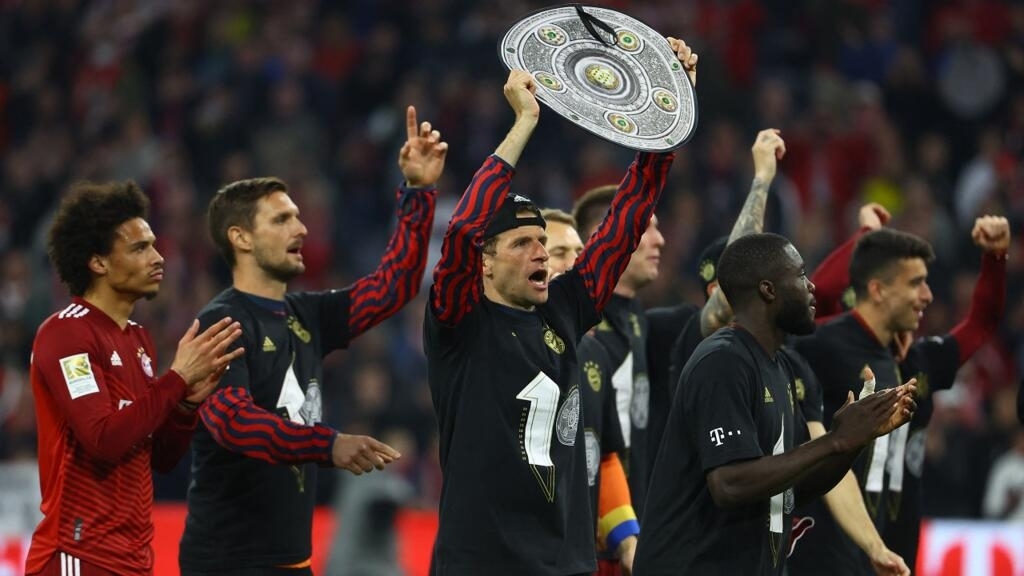 32 German championship titles, including 10 consecutive, which no team had done in a major championship: Bayern Munich offered themselves this new trophy on Saturday in the most prestigious way, beating their historic rival Dortmund 3-1 at the Allianz-Arena.

the Bayern Munich still outrageously dominates German football. The Bavarian giant proved it again by winning a 32nd Bundesliga title against his best opponent, Borussia Dortmund. At the final whistle, the Bavarians sacrificed to the tradition of the “beer shower”, in particular generously sprinkling their coach, Julian Nagelsmann, with Bavarian blonde.

With this 3-1 victory, the Bavarians have 75 points after 31 matches, 12 points ahead of BVB with three matches remaining in the season. They can no longer be joined and retain the “Schale”, the champion’s trophy they have held since 2013. Dortmund, eight points ahead of their first pursuer Leverkusen, in principle have nothing to fear for their second place .

The German “Klassikers” follow and resemble each other. This victory is Bayern’s 8th consecutive in this prestigious duel since 2019, in all competitions. After a quarter-hour observation round, Munich scored on the first chance of the match: Leon Goretzka deflected a corner back towards Serge Gnabry, who cushioned and placed an unstoppable shot from 15 meters (1 -0, 15th).

After a second goal from Gnabry disallowed by VAR for offside, Robert Lewandowski struck in turn. After a bad pass from Dortmund’s French central defender Dan-Axel Zagadou, Thomas Müller launched the Pole deep for the second goal (2-0, 34th).

On returning from the locker room, on the first against Dortmund, Joshua Kimmich committed an indisputable fault in the area on the captain of Borussia, Marco Reus. And it was Emre Can, and not Erling Haaland, who took the penalty, taking Manuel Neuer on the wrong foot (2-1, 52nd).

The future in question despite everything

This title, acquired three days from the end against the historic rival, confirms Bayern’s overwhelming domination of its championship. But it leaves open many questions which have plagued the club this season and which must be resolved to prepare for the future.

The key players first: the contracts of Lewandowski, Müller, Neuer and Gnabry, four managers, expire in June 2023, and no extension has yet been signed.

Then quality: Bayern have leaned a lot forward this season. The defence, despite the presence of three French internationals, was not at the level of the line of attack. Nagelsmann explained it by the style of play of the team, very offensive and constantly pressing, which leaves spaces behind for opposing counterattacks.

Still, the Munich press is worried about the departure this summer of central back Niklas Süle for Dortmund, a year after those of David Alaba (Real Madrid) and Jérôme Boateng (Olympique Lyonnais). Without reinforcements, the central hinge would come down to Lucas Hernandez, an intractable stopper but not really a leading player, Dayot Upamecano, with enormous potential but still with a few concentration errors, and Tanguy Nianzou, who is only 19 years old and still to prove.

Nagelsmann, who admitted that winning “only” the championship was “insufficient” in view of the club’s ambitions, will again be expected in the Champions League. Elimination in the quarter-finals against Villarreal has tarnished this season. Its future success will depend, in large part, on the manpower that its leaders manage to offer it.

in yellow and blue, sport pays homage to Ukraine