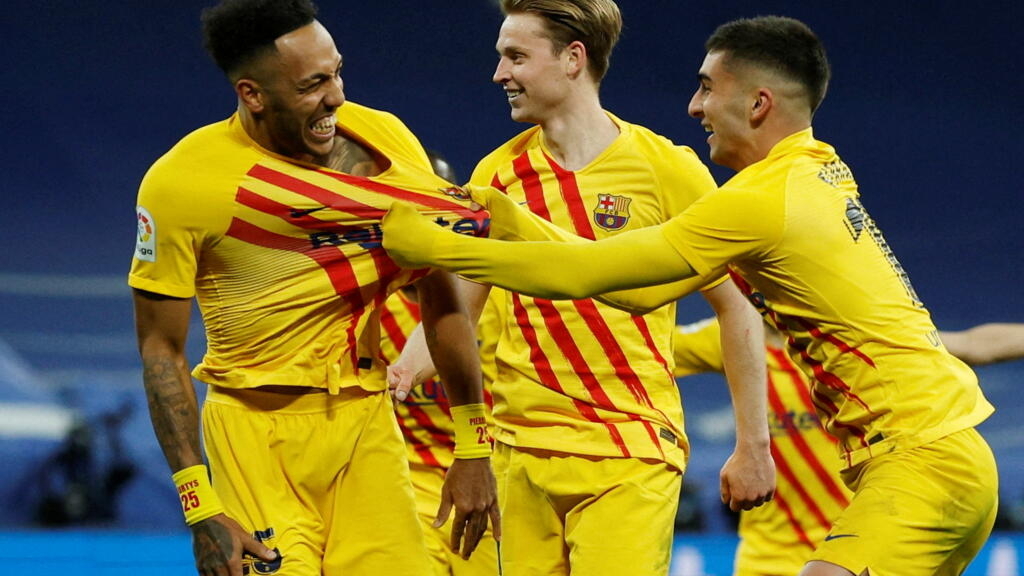 FC Barcelona largely dominated Real Madrid (4-0), Sunday evening, in the 29th day of La Liga. Barça, now 3rd in the standings, dealt a blow to the people of Madrid who so far had a perfect season.

the FC Barcelona is back ! After five clasicos lost in a row, Barça crushed Real Madrid 4-0 on Sunday March 20 for the 29th day of La Liga at the Bernabéu, and moved up to 3rd place in the standings, tied with Atlético Madrid (4th, 54 pts ).

The Catalans took the lead in the first half thanks to two perfect balls served by Ousmane Dembélé for headers from Pierre-Emerick Aubameyang (29th) and Ronald Araujo from a corner (38th), then sealed the result with two more goals at the return from the locker room, signed Ferran Torres (47th) and Aubameyang (53rd), for his double.

A prestigious success which comforts Xavi in ​​his operation to rise in the standings: the providential Catalan technician had taken over the team in 9th place in La Liga in November, and managed to hoist it on the podium ten days from the end.

Even if twelve points still separate the Blaugranas from the “White House”, the undisputed leader of the championship, the crushing blow is terrible for the team of Carlo Ancelotti, who had so far managed a perfect season since his return to the bench, the ‘last summer.

Offensively inert and very feverish in defense, the people of Madrid, deprived of their favorite striker Karim Benzema (injured in the left calf) and their left back Ferland Mendy (left abductor), were completely annihilated by the Catalans.

Conversely, the Catalans, boosted by their success Thursday in Turkey 2-1 and qualification for the quarter-finals of the Europa League, extend their series of invincibility to twelve matches in all competitions. In La Liga, they have not lost since December 4 (1-0 against Betis at Camp Nou).

Dominating from the start, the Catalans smashed the defense of Real, who showed off their new black jersey. Ousmane Dembélé, preferred to Adama Traoré on the right wing, crunched Nacho throughout the first period. And he even just missed crowning his very good match with a goal, hooked by Eder Militao and Casemiro in the area in the 74th.

Courtois, precious in the 12th on the first big double opportunity for the Blaugranas, could not cope with the successive waves of yellow and red color. He conceded as many goals on Sunday night as in the last ten matches.

Ancelotti tried to react by bringing in Eduardo Camavinga from 46th, to try to compete in midfield, and Mariano, to add an offensive option … but in vain.

This humiliation awakened the memory of May 2, 2019, when Pep Guardiola’s Barça came to crush Real 6-2 in its enclosure, at the Santiago-Bernabéu.

Eight months after the departure of Lionel Messi and after five clasicos lost in a row, Barça has finally restored its image at the best of times, for the 249th edition of the most watched club match in the world.

And Xavi, acclaimed by the Catalan supporters present at the Bernabéu on Sunday evening, rebalanced the accounts against Ancelotti, after the semi-final of the Spanish Supercup won 3-2 after extra time by Real at Riyadh in January.

At the end of the match, these same supporters sang to ask for a “manita”, a fifth goal, while Real supporters left the spans of the stadium before the final whistle.

Even if the sporting consequences of this correction are anecdotal, the psychological blow could shake up the end of the season.

After the international break, Real will have to find the resources to recover, before facing Chelsea in the quarter-finals of the Champions League (April 6 and 12) and perhaps sealing their coronation in La Liga at the end of April.

And Barça, in its best shape for three years, can start dreaming again.

according to Washington, Moscow has deployed up to 7,000 troops closer to Ukraine