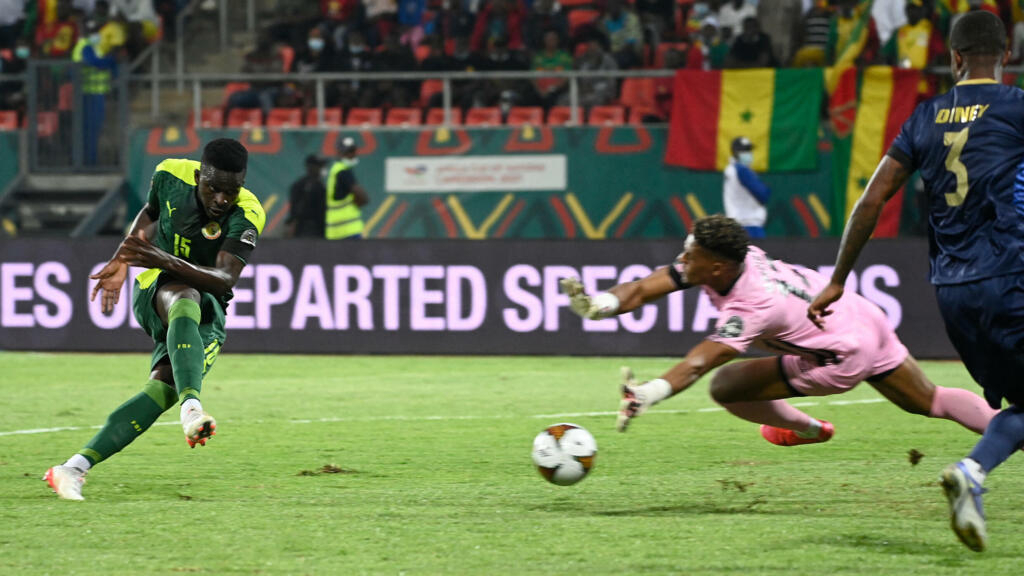 Senegal does not only have Sadio Mané as an attacking asset. At 21, the young Bamba Dieng confirms with the Lions of Teranga that he is the next generation. Portrait.

He dances like Bouba Diop, celebrates his goals like El-Hadji Diouf, plays in Mamadou Niang’s club and will take the place by Sadio Mane. Bamba Dieng, 21, carries with him the history and the hope of Senegal before the quarter final of African Cup of Nations (CAN) against Equatorial Guinea, Sunday January 30 in Yaoundé.

The Marseillais knows the legend of the Teranga Lions. When he scored his first national goal, in the Round of 16 against Cape Verde (2-0), the young Marseillais reproduced with teammates the dance step, legendary in Senegal, of Pape Bouba Diop, scorer of the opening match against France (1-0) at the World Cup-2002 and died in 2020.

“It came to mind and I did it,” simply says the man of the match, to whom many in Senegal promise a great future, in the footsteps of current idol Sadio Mané. He willingly confides that he likes to watch the videos of the epics of the Teranga Lions.

“This tribute to Pape Bouba Diop is a gesture of union between all generations”, judges El-Hadji Diouf, decisive passer for Bouba Diop at the time, “that of 2002 and that of today” which runs after Senegal’s first major title, beaten twice in the CAN final, in 2002 precisely, and in 2019.

Always concerned about heritage, the Diambars-trained striker also wears the same t-shirt as El-Hadji Diouf in his jersey. With a stencil portrait of Cheikh Ahmadou Bamba, founder of Mouridism, one of the Sufi brotherhoods of Senegal. Bamba Dieng bears his name.

Diouf, now an adviser in the Senegalese delegation, also sees in Bamba Dieng “a center forward for the future. He is an ambitious young man, a very strong character, he takes risks, plays well with his back to goal, he will fast and knows how to do everything”.

He had revealed himself in France during a performance extraordinary with Olympique de Marseille in September in Monaco (2-0). While he had only played a minute of play so far, the Senegalese had his first start and scored twice. Enough to offer him the front page of the Team, the benchmark French sports daily, the following day.

The story is beautiful because at that time, Bamba Dieng was still only a young person from the training center under contract with the Marseille club until 2024 and paid the legal minimum wage for a professional footballer: 1,800 euros. .

A young man whose OM management wanted to get rid of in the summer of 2021 in the event of an offer of more than 5 million euros. Fortunately, coach Jorge Sampaoli had a hollow nose in opposing it. And Bamba Dieng now has a contract that lives up to his potential with Marseille.

A product of the Diambars Institute

A native of Pikine, in the suburbs of Dakar, Bamba Dieng joined the Diambars Institute at the age of 13, a school club created by Patrick Vieira, Bernard Lama, Jimmy Adjovi-Boco and Saer Seck, the current director, who train talents Senegalese.

In this training center based in Saly, the young Bamba Dieng tests himself in several positions before finally settling in attack. A white year due to sprained cruciate ligaments delays its hatching. However, he fights to come back and joins the pro group.

During his first professional season, he scored 12 goals in 14 Senegalese Ligue 1 games… and earned the nickname “Bambagoal”. Before being transferred to OM in August 2020 due to the institute’s partnership with the Marseille club.

“Bamba is a calm and determined player, he does not crumble at the slightest annoyance,” Diambars boss Saer Seck told AFP. “He knows that a striker has to create chances. Put it in the back, it will come. What is worrying is not creating any.”

“I had already seen him with the Diambars”, supports Diouf, “he never lets go. He can miss an opportunity, he never doubts. Against Cape Verde, he took risks and it paid off.”

“It’s a great pleasure”, resumes Seck, “a pride, each time one of our residents scores in the Senegal team, especially at such a high level” as a knockout round of CAN.

From now on Bamba “is a model” for the students of the Diambars. He is becoming a reference player, and since he left not long ago, the youngest still know him perfectly, “continues the leader of the famous Saly Academy.

The video of Diambars’ kids celebrating his first pro goal, against Auxerre in the Coupe de France, had gone viral. “He will have to keep in the back of his head that hundreds of pairs of eyes are trained on him and will want to copy him,” Seck concludes.

The heir already leaves a legacy.

Naples in the lead in Italy, Dembélé carries Barça