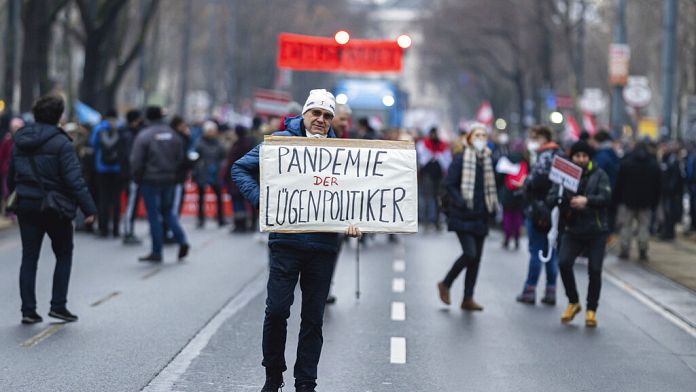 Tens of thousands of demonstrators gathered on Saturday in the center of Vienna after already several weekends of protest in the country, to denounce the compulsory vaccination against Covid-19 and the confinement of those who refuse any injection.

About 44,000 people were present, according to estimates communicated by the police.

A total of 24 separate rallies were planned in the Austrian capital, the far-right FPÖ party organizing in particular “a mega-demonstration” close to the Hofburg Palace.

Its leader Herbert Kickl has vowed to continue with actions until “the government is in deep trouble”.

“A shame for our country”, “I am neither a neo-Nazi nor a hooligan, I fight for freedom and against the vaccine”, “No to vaccine fascism”, one could read on the signs waved by the crowd.

A week ago, more than 40,000 people had already marched in Vienna and as many on November 20, just after the announcement of a compulsory vaccination project, unique to date in the EU, to fight the pandemic.

This week, the government unveiled the details: the law will apply from February 2022 to all Austrian residents aged 14 and over (unless exempted for health reasons).

The vaccination cannot be imposed by force, specifies the text, but the refusal of a person to comply with it will have legal consequences, with an initial fine of 600 euros which can go up to 3,600 euros in the event of non payment.

In addition, if the confinement of the vaccinated ends on Sunday, the unvaccinated remain banned from leaving.

Why “exclude those who are not vaccinated and in particular children? I find it unbelievably discriminatory not to be able to send a kid to dance, tennis or even to the swimming pool,” AFP told AFP Manuela, 47, from Lower Austria and herself “vaccinated twice”. “It makes me really sad.”

“We can have different opinions and values ​​but live together freely,” says Analea, a 44-year-old violin teacher. “This is not the direction a democratic society should take.”

In Spain, a peaceful march was organized in central Madrid on Saturday to denounce government policy in the face of the health crisis. Waving banners denigrating the vaccines, the crowd protested against what they considered to be an organized plan to control society and restrict the rights of citizens.

While nearly 90% of eligible people are vaccinated in the country, the rise in infections in recent weeks does not seem to be reflected in hospital services for the moment.

The Spanish Ministry of Health has also given the green light for children aged 5 to 11 to be vaccinated against COVID-19 from December 15.

Early voting in Portugal: voters have started voting for the legislative elections