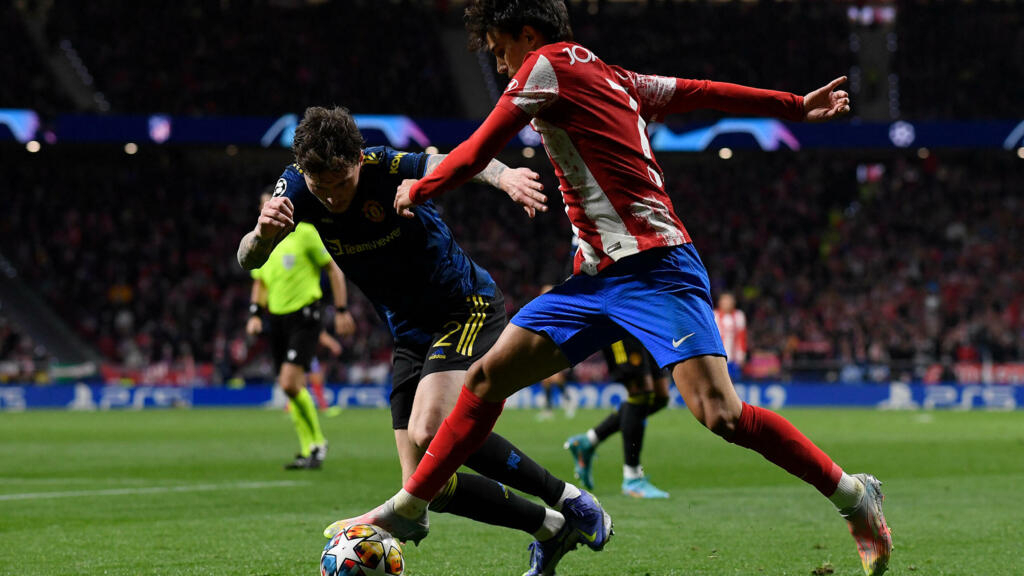 Atlético Madrid missed out on Wednesday at home to Manchester United (1-1). After taking the advantage in the first moments of this round of 16 first leg, Diego Simeone’s men were caught late in the game. The match between Benfica Lisbon and Ajax Amsterdam also ended with a parity score.

Atlético Madrid can bite their fingers. While the “Colchoneros” had the game in hand for a long time, they let Manchester United equalize at the very end of the match (1-1), Wednesday, February 23. The qualification for the quarter-finals will therefore be played at Old Trafford in two weeks. The other round of 16, between Benfica Lisbon and Ajax Amsterdam, also ended in a draw (2-2).

In their Wanda Metropolitano stadium, the “Colchoneros” are masters. Diego Simeone has decided to bet on an unusual association in attack, with the duo Joao Felix – Angel Correa and a defense of three. A masterstroke since the “Matelassiers” take control of the match from the start.

Maguire has a lot to do under the battering of Joao Felix, just like his partners in the Mancunian defense. But, after a corner pushed back by Lindelöf, Renan Lodi recovers on the left side. The latter wraps a cross towards Joao Felix who cuts the trajectory at the near post. His header hits the boat and enters the goal (7th, 1-0).

Manchester tries to react but Atlético Madrid is well in place defensively. The people of Madrid prevent the ‘Red Devils’ from finding their attackers and their superstar Cristiano Ronaldo. They must rely on long shots like the strike from Bruno Fernandes (15th).

The Reds and Whites wait calmly and take their chances. On a cross from the left, Joao Felix tries an acrobatic scissor from the left which passes clearly above the goal of De Gea (28th). Lodi sends a shot into the small net (33rd).

Cristiano Ronaldo, very nervous, must wait until the 37th minute to finally stand out. At the entrance to the surface, the Portuguese tries a low shot, but it is next to the goals of Oblak (37th). A statistic illustrates his difficulties: the quadruple Ballon d’Or will only have touched the ball 17 times in the first half.

0 – Manchester United have failed to make a single touch in the opposition box in the first half of a Champions League game for the first time since at least 2005/06. Vigilance. pic.twitter.com/KF8CARcVaW


Vrsaljko fails to answer him by making the break as his header finds De Gea’s bar after a deflection from Lindelöf (44th).

Returning from the locker room, Paul Pogba seems to position himself a notch higher in the midfield, giving oxygen to his team’s offensives. The pressing is also more effective and the chances follow: Rashford takes his chance on a free kick (57th), Oblak has to block a long ball from Ronaldo deflected by his defender.

Atlético responds by putting more intensity in the duels. The faults and contacts multiply, stimulated by the clamor from the stands of the Wanda Metropolitano stadium. A rain of yellow cards falls on the players. On a free kick perfectly at the entrance to the area, Cristiano Ronaldo misses the target (80th).

And inevitably, Atlético Madrid, too wait-and-see in the second period, ends up cracking. Fred finds Fernandes who brings the ball up 25 yards before launching Elanga perfectly deep. The 19-year-old Mancunian crosses his shot and deceives Oblak (81st, 1-1).

Atlético failed to regain the advantage in extremis. On a corner hit by Lemar on the left side, Llorente recovers the ball at the far post and deflects it slightly for Griezmann, who has just entered. The curled strike from the left from the French hits the crossbar (87th). With two crosses in the match, Atlético can harbor regrets about this draw.

Draw also between Benfica and Ajax

Benfica and Ajax Amsterdam, two former European champions, drew 2-2 after an open and spectacular Champions League Round of 16 first leg in Lisbon.

Serbian Dusan Tadic opened the scoring (18th), Benfica equalized with an own goal from Ajax striker Sébastien Haller (26th) who redeemed himself three minutes later by scoring his second goal (29th ). The Ukrainian Roman Yaremchuk (72nd) snatched a welcome equalizer for the Portuguese before the return match in Amsterdam on March 15.

Basketball – NBA: These revelations on the tensions among the Lakers!