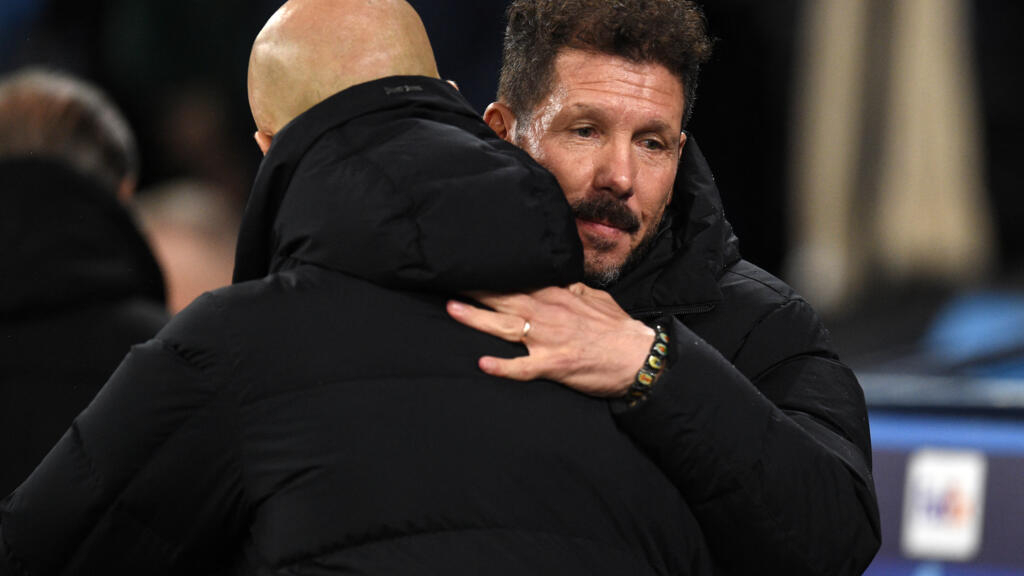 Pragmatism or fair play? Beaten 1-0 in the first leg, Diego Simeone’s ultra-defensive Atlético Madrid is counting on the fervor of its public to overthrow Pep Guardiola’s Manchester City and reach the semi-finals.

The debate is as old as football: is it important to offer a polished, forward-looking game and an innovative tactical plan or, on the contrary, to bet on fervor and aggressiveness, the “grinta” dear to Latin Americans? ? The duel between the Argentinian Diego Simeone, renowned for his tight and efficient Atlético de Madrid, and the Spaniard Pep Guardiola and his Manchester City capable of mobilizing the ball to harass the opponent, represents the quintessence of this inherent opposition to the ball round.

Close to thwarting the patterns of the cerebral Guardiola before giving up in the quarter-final first leg (1-0), Simeone is now banking on the fervor of the Metropolitano stadium, where Atlético have never lost a Champions League knockout match, to try to dismiss the 2021 finalist. Objective: bring Atlético back to the C1 semi-finals for the first time in five years.

“It’s not pretty to see, but it’s effective”

And too bad if Atlético were criticized for their tactical reluctance at the end of the first round: this is how the Madrid club reached two Champions League finals (2014, 2016) and won two Europa Leagues ( 2012, 2018) under the orders of Simeone.

“Maybe it’s not pretty to see, but it’s effective,” summed up Frenchman Thomas Lemar, midfielder of Atlético, in an interview with AFP on Monday.

A part (at least 5,000 seats) of the Madrid stadium will be closed on Wednesday, on the orders of UEFA, which sanctioned the club because of the “discriminatory behavior” of certain Spanish supporters. A video released by the Spanish sports newspaper Marca shows Spanish fans giving a Nazi salute during the first leg at the Etihad Stadium.

The enclosure (68,000 seats in normal times) should however be boiling hot on Wednesday evening in Madrid, where City and “Atleti” are preparing for a bitter and fiery match.

Between the two rounds, the “Citizens”, finalists of the last edition, were hung 2-2 by Liverpool in a duel at the top of the English championshipSunday, while the “Colchoneros” were surprised 1-0 at one of the promoted from La Liga, in Mallorca, on Saturday.

Everyone may have had their reunion in mind, during which Atlético should remain faithful to their defensive hermeticism in the first leg and watch for counterattacks in the wake of Antoine Griezmann.

“They played with two lines of five!”, commented Guardiola after the narrow success of the first leg. “In prehistoric times, today or 100,000 years from now, attacking against two lines of five will always be very difficult.”

Renowned for his boundless motivation and for his ability to unite his group around him, Diego Simeone will once again have to touch his players in their pride to transmit to them his thirst for victory.

“He does not need to give us advice (on the mental aspect, editor’s note). His speech, his way of speaking, his frankness, that allows us to surpass ourselves”, summarized Thomas Lemar.

And the French environment to recall the aggressiveness of the former Argentinian international environment. “Did you know the player? Well, that gives Atlético the image now. . That’s what he wants to convey to us, not to rest on our laurels,” Lemar said.

A specialist in incredible comebacks, Atlético have often been able to find the resources in badly started matches this season in La Liga: against Valencia in January (3-2), against Getafe in February (4-3)…

And if they needed a reference, the “Rojiblancos” can look in the rear view mirror: in 2016, during the quarter-finals of the Champions League against Barça of the “MSN” of Lionel Messi, Neymar and Luis Suarez, heir de Guardiola and reigning European champion, the “Colchoneros” lost 2-1 in the first leg … before winning 2-0 in the return to reach the semi-finals (they will end up s losing in the final 1-1, 5-3 on pens against Real Madrid).

Same phase of the same competition, same away setback in the first leg, same feeling of impossible… and same result, Wednesday?

“There is something for all types of runners”

Cameroon wants to confirm against Ethiopia