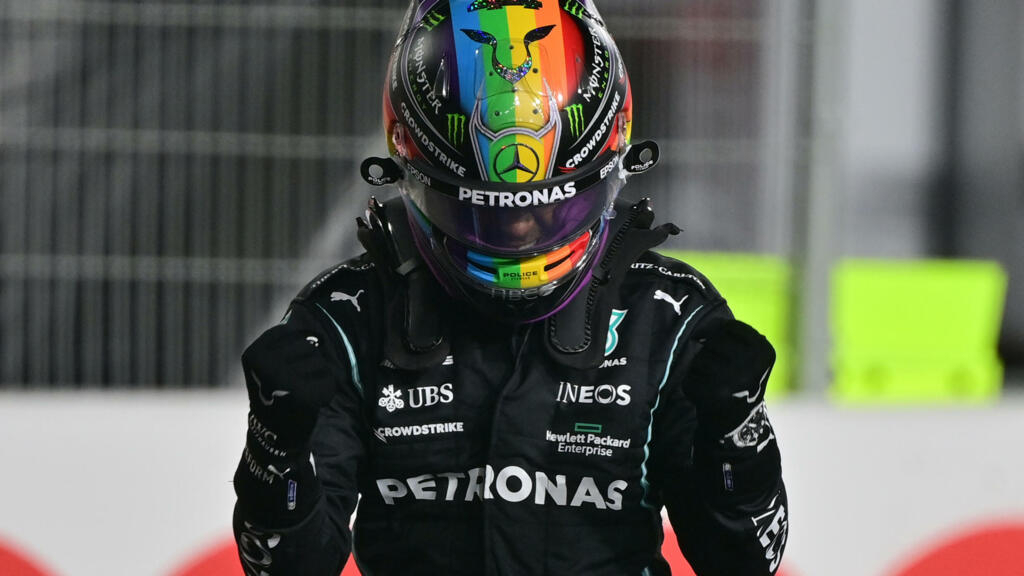 As the weekend of the first Saudi Arabian Grand Prix in the history of Formula 1 begins, NGOs denounce the kingdom’s shortcomings in human rights. Used to speaking out on the subject, reigning world champion Lewis Hamilton lived up to his reputation during the first press conference.

The Saudi leadership certainly could not have dreamed of a better scenario. By the time the pilots of Formula 1 come to Jeddah for the very first Grand Prix in Saudi Arabian history, and the penultimate meeting of the season, the duel for the title of world champion continues to rage between Max Verstappen (Redbull ) and Lewis Hamilton (Mercedes), an unprecedented situation since 2016.

A perfect diversion for Saudi Arabia as several NGOs accuse the emirate of using the event and the festivities around it to “distract from widespread human rights violations,” in the words of Human Rights Watch.

Football, cycling, Paris-Dakar, Formula E and now Formula 1… In recent years, Saudi Arabia has used sport to improve its image and diversify its oil economy, as it is already doing with culture and tourism. An attitude described as “sportwashing” by several associations for the defense of human rights, starting with Human Rights Watch and Amnesty International, who call on the pilots and artists invited this weekend to act.

>> To read also: Football, cycling, Dakar … the weapons of “soft power” of the Saudi kingdom

“Any company that participates in an event of major importance in Saudi Arabia must detect, mitigate or prevent any human rights abuses that it may cause or to which it may contribute or be directly linked as a result of its activities, products or services. , including with regard to Formula 1 and its grand prix “, enjoins Amnesty International in a statement.

“The Saudi authorities must understand that respect for human rights is the best possible public relations operation. If the authorities want to change the image they project, then they must immediately and unconditionally release all those incarcerated for having peacefully expressed their opinions, lift all travel bans and establish a moratorium on the death penalty, ”adds the NGO.

“If they do not voice their concerns about the serious abuses committed by Saudi Arabia, Formula 1 and performers risk supporting the Saudi government’s costly efforts to whitewash its image, despite a significant increase in repression over the years. years, “says Michael Page, deputy director for the Middle East within Human Rights Watch, in a statement.

In a hurry” express at a press conference Thursday, December 3, the British pilot Lewis Hamilton, who made the fight against discrimination his fight, did not kick in touch. He said in particular that he was not “comfortable here but that it was not (his) choice”.

“Our sport has chosen to be here and whether it’s fair or not, I think that while we’re here it’s still important to do some outreach work,” he continued. “It is important for us to raise awareness. And I try to do it on my own terms. And the laws which condemn homosexuals (prison and flogging) are quite appalling.”

For the seven-time world champion, it will be a question of wearing the helmet again in the colors of the LGBT + community he already wore in Qatar two weeks ago and will wear again in Abu Dhabi next week.

Another driver made a point of making a gesture: the former world champion Sebastien Vettel. He organized a karting event with a few women, in a country where they have only been allowed to drive since 2018. He will also be wearing a “Race for women” tribute helmet during the race.

“Seeing the confidence of these women and giving them this opportunity in a sector dominated by men, it’s great and it gave me a lot of pleasure,” he explained. “Of course there are shortcomings to be corrected but I think the positive is a more powerful weapon than the negative.”

The German is not his first attempt at politics in the paddock either. Before the departure of the Hungarian Grand Prix in Augustt, he had presented himself dressed in a T-shirt and wearing a rainbow-colored mask to denounce the new legal provisions prohibiting the “promotion” of homosexuality among minors, which had recently entered into force. force in the country. On this outfit, a message was written in black “Same Love”.

Justin Bieber under fire from critics

Expected Sunday for a concert on the sidelines of the Saudi Arabian GP, ​​Justin Bieber has been widely criticized by human rights associations for his participation.

Hatice Cengiz, the fiancee of Saudi journalist Jamal Khashoggi, assassinated in 2018 at his country’s consulate in Istanbul, has led the movement calling on Justin Bieber to cancel his visit. “This is a unique opportunity to send a strong message to the world that your name and your talent will not be used to restore the image of a regime that kills its opponents,” she wrote in a published column in the Washington Post at the end of November.

On social media, the hashtag #WTFJustin was widely shared, as a plane sported a “Why is Bieber singing for Saudi assassins?” flew over the Los Angeles skies last month at the American Music Awards.

Anticipating the criticism that the Jeddah Grand Prix would arouse, Prince Khalid bin Sultan, president of the Saudi Automobile and Motorcycle Federation, had split an interview.

“What (polishes) the image of the kingdom, it is not a singer, but its leaders and its people … You cannot polish or show a different image of reality”, he justified

“A fight has been waged against the kingdom for years, a fight for political reasons,” said the boss of motorsport in Saudi Arabia. “There are those who say the kingdom is behind schedule and against human rights … Of course, no one is perfect, and the greatest freedom and human rights wielding nations have more than their fair share of criticism. in these areas. ”

“We believe in ourselves, this war will continue, we will continue on our way and the door is open to everyone to visit us and see who we really are”, tried to convince the prince.

More anecdotal, but nevertheless revealing, no dress restrictions apply in the end on the Jeddah circuit, where the GP is held, or in any public place in the city.

At first, the Spanish newspaper Marca had mentioned strict rules, especially for women, which caused the discontent of some teams and the general public. But a note then sent to the media by the organizer only urges them to “respect the cultural sensitivities of Saudi Arabia”.