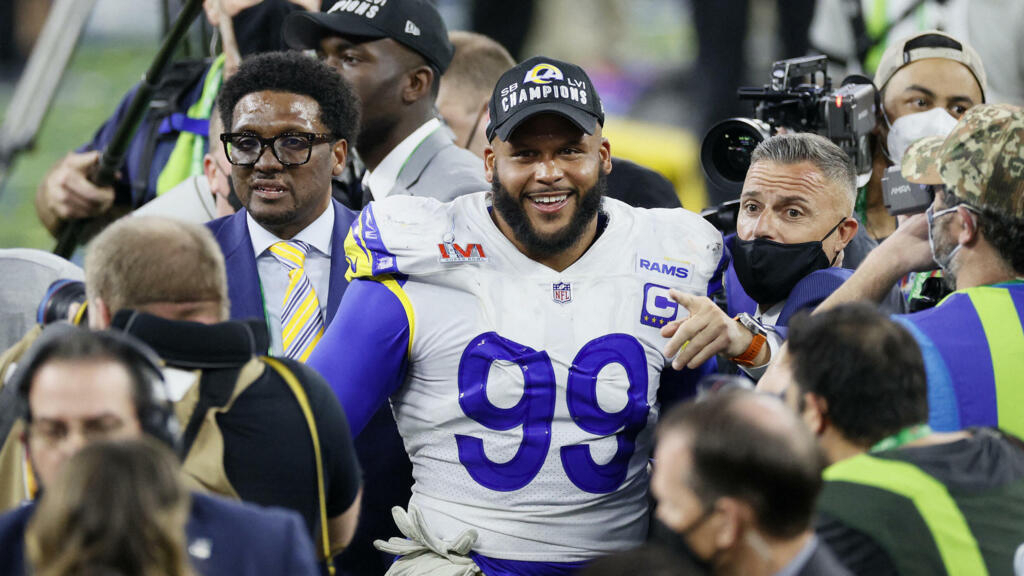 The Rams won the second Super Bowl in their history on Sunday at SoFi Stadium in Los Angeles by beating the Cincinnati Bengals. It all came down to three points, 85 seconds from the end.

And Cooper Kupp caught Matthew Stafford’s pass for the touchdown 85 seconds from the end: the Rams won the second super-bowl in their history, by beating (23-20) the Bengals, after a final with unbearable suspense, Sunday February 13.

Thus ends the championship of the American Football Professional League (NFL), in the line of exceptional play-offs marked by incredible match scenarios. And, like in a Hollywood movie in LA’s SoFi Stadium, this Super Bowl, 56and of the name, has had its share of twists and turns.

>> To read : SoFi Stadium, the most expensive sports venue in the world

Crowned for the first time in 2000, when the franchise was based in Saint-Louis (Missouri), the Rams succeeded the Buccaneers, whom they had eliminated in mid-January, accelerating without knowing it yet the retirement of the legendary Tom Brady, seven-time champion.

This surprise victory was in itself a revenge taken on the legendary quarterback, who had deprived them of the title in 2018, then winning his sixth ring with the New England Patriots.

And like Tampa Bay last year, LA will have finally managed to be champion by playing a Super Bowl in its lair. However, they did not really have the impression of evolving at home as the brand new SoFi at 5.5 billion dollars, filled by 70,000 spectators, was striped in orange and black and so many Bengals fans are heard.

If it weren’t for the sun, the ambient 30 degrees Celsius and the dozens of celebrities present, from The Rock, who announced the two teams, to Jennifer Lopez, via Kareem Abdul-Jabbar, Shaquille O’Neal, Sean Penn , Samuel L. Jackson, Charlize Theron and Ye (Kanye West), face completely covered with a black veil, it was like being in Ohio.

The start of the match was not to the advantage of the “visitors”, however, as the Rams managed two touchdowns in the first and second quarters, Matthew Stafford finding first Odell Beckham Jr, then Cooper Kupp, already him, after a series of attacks that made the Bengals defense dizzy 13-3).

But Cincinnati responded immediately. Joe Burrow, hardly to his advantage until then, despite some good “drives”, combined with Joe Mixon who played quarterbacks and found Tee Higgins for the touchdown (13-10).

As soon as it restarted, the match then took a big turn, when Beckham Jr injured his left knee on his own. In October 2020, while playing with the Cleveland Browns, he suffered a cruciate ligament rupture against these same Bengals. This curse momentarily knocked out his people.

Because after the halftime show, at the top of hip hop, between current crème de la crème embodied by Kendrick Lamar, and vintage revival with Dr. Dre, Eminem, Snoop Dogg, Mary J. Blidge and 50 Cent as a surprise guest , the Bengals had a thunderous start to the second period.

From his first throw, “Joe cool” sent the kind of “hallelujah” pass that we usually try as a last resort and 70 yards further, Tee Higgins, author of a double, caught it to go to the touchdown. A superb action although marred by a fault not whistled, the receiver having in his race caught the grid of the helmet of his defender (17-13).

Whereupon Stafford, in turn on the maneuver, was intercepted for the second time in the match. But his defenders made the difference, putting Burrow through hell, who was sacked eight times, breaking a record for a Super Bowl. And each scorer did his job: Evan McPherson, 100% as since the start of the play-offs, brought the score to 20-13 for the Bengals, then reduced to 20-16 by Matt Gay.

The last quarter was on the line and finally, Stafford, on borrowed time, found Kupp, logically designated MVP.

For Cincinnati, this defeat on the last step is the third after those conceded in 1982 and 1989 against the San Francisco 49ers. Probably the hardest to collect.

Tunisia’s Ons Jabeur, first player from an Arab country to enter the Top 10

NBA | Basketball – NBA: Harden ignites after his huge performance against the Pistons!

CAN-2022: at the Brasseries du Cameroun football school, we are preparing the next generation of the Indomitable Lions