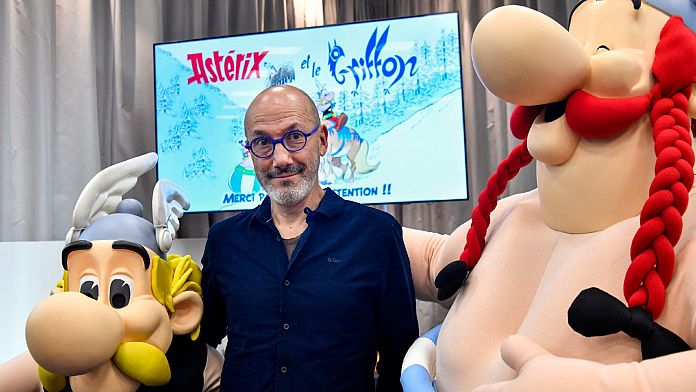 By Toutatis, Asterix and his gang return for a 39th adventure! This new album, called “Asterix and the Griffin“, leads the die-hard Gauls on a journey through eastern Europe in search of this mysterious half-eagle, half-lion creature.

If the name of this new opus was already known, its cover was officially presented this Monday before its release in bookstores on October 21. This album is the fifth of the post-Uderzo era. Like the previous four,”Asterix and the Griffin” is directed by the duo formed by Jean-Yves Ferri in the script and Didier Conrad in the drawing.

In this adventure, our friends the Gauls set out east to the snowy lands of the Sarmatians, a nomadic people little known from antiquity who lived in a region that stretched from present-day Ukraine to the foothills of the Caucasus and the steppes of Central Asia.

Along the pages, Asterix, Obelix, Idefix accompanied by the most famous druid, Panoramix, will come to the aid of the Sarmatians to thwart the mission of a Roman legion sent by Julius Caesar to capture the famous griffin. A terrifying animal that this people, just as elusive as the Gauls, chose as their totem.

“The travels of Asterix, it represents quite a lot of countries already (…) There is a cold country. It’s new, it sets the tone for this album that basically happens in the snow“, stressed this Monday Jean-Yves Ferri. Historically, “not much is known about them (…) Herodotus, Livy had spoken of the Sarmatians. They were Barbarians, but a somewhat mythical people“, added the screenwriter of the comic during a press conference in Vanves, in the south of Paris, at the headquarters of Hachette Livre.

This group has owned since 2011 the editions Albert René –_ named after the two creators of Asterix, Albert Uderzo and René Goscinny _– who publish the albums of these pesky Gauls who resist, again and again, the Roman invader.

Before being available in bookstores and online, Éditions Albert René reported that it had printed “Asterix and the Griffon” in two million copies in French out of a total of five million in 17 languages. If the success has never been denied in France, it is also the case in other countries, especially in Germany, Spain or Italy.

Asterix on all fronts

This year 2021 is decidedly rich for the little Gallic who celebrated his 60th birthday in 2019. A video game is thus announced for November 25. “Fuck them all“, as its name suggests, will offer to make valdinguer in the air Roman and other pirates, with great blows of magic potion. Except, of course, for the one who fell into it when he was little. Isn’t it Obelix?

Asterix, Obelix and Idefix will also soon land in another universe, this one very physical. Playmobil has indeed recently posted on Twitter a message officializing the arrival of a collection centered on the offspring of Goscinny and Uderzo. The German brand of toys, inspired by the strategy of its Danish competitor Lego, declines in recent times very many franchises like one of the last dedicated to the science fiction series “Star Trek“.

Finally, Asterix is in the spotlight of a major exhibition organized until November 28 at the Château de Malbrouck, in the department of Moselle (north-east of France).

“Asterix the European“offers visitors to follow Asterix and Obelix on their many trips to the four corners of the continent thanks to exceptional objects and documents, such as 18 original plates of the album “The Golden Serpe” loaned by the Bibliothèque Nationale de France.

Germany: who negotiates what and with whom ?