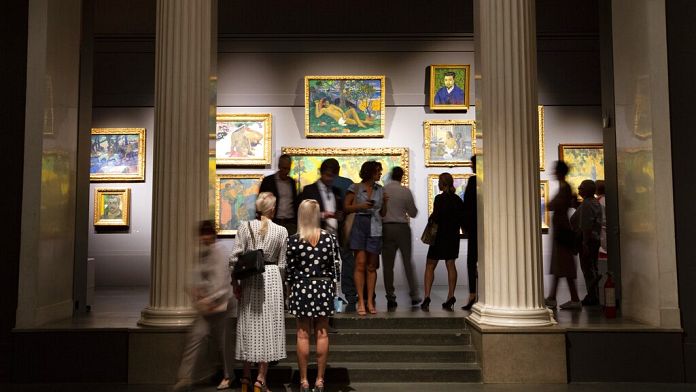 Carmen Thyssen and the Spanish government on Wednesday signed an agreement for the aristocrat’s collection to remain in Spain for another 15 years. The document, the result of more than a decade of negotiations, provides for the rental of 330 works for 6.5 million euros per year. The works will be exhibited at Thyssen-Bornemisza Museum in Madridwhich will celebrate its 30th anniversary next October.

“Finally. It’s a historic day, I’m very excited”, said the widow of Baron Thyssen, with tears in her eyes. Her dream, she said, was that the two collections (hers and her husband’s) “be together”and from today they will continue to be so, at least for the 15 years that the agreement lasts.

The collection was lent to Spain free of charge for 21 years. Negotiations for his arrival in Spain began shortly after the Spanish government purchased the Baron’s collection.

The state intended to purchase the Baroness’s collection as soon as she arrived in Spain, as it had done with her husband. It is for this purpose that an extension of the Madrid museum was carried out for 38 million euros. Works that provide 8,300 square meters of additional space.

With this agreement, Carmen Thyssen (78) opted for the rental and for her heirs to decide if they want to sell it to the State, once the 15 years have passed.

The initial contract for the Carmen Thyssen collection included almost 800 works, but over the years, that number has dropped significantly. The aristocrat opened other museums (Malaga and Andorra) and sold major works such as “The Lock” by John Constable.

The agreement is advantageous for the aristocrat: she will receive 6.5 million euros per year for 15 years, and she will be able to lend 20 works for other exhibitions. Once the contract is completed, the government will have a preferential right to purchase the collection – which has been valued at €1.7 billion – and all sums paid over the years as rent (97.5 million euros) will be deducted.

During this period, the Spanish government will cover the costs of maintenance, restoration and insurance of works. If necessary, the baroness will be able to sell up to three works, but none of them will be the “Mata Mua” (Once).

The work painted by Paul Gauguin (1848-1903) occupies a special place in the visit. His departure from Spain with three other paintings – a Degas, a Hopper and a Monet – in 2020, in full confinement, had opened one of the most serious crises of the entire negotiation process.

The collection of paintings, exhibited in a series of new rooms, will be accompanied by four sculptures by Rodin that the baron’s grandfather had commissioned from the French sculptor.

The Baroness’ son, Borja Thyssen, signed the deal with his mother as he also owns the two companies that own the works.

“My father taught me to love art and to share it (…) Today is a very special day, the road has been long, with many difficulties, I would be lying if I said otherwise, but the most important thing is that it gives a fifteen-year guarantee to the collection”did he declare.

In Memphis, Starbucks fires employees who sought to unionize