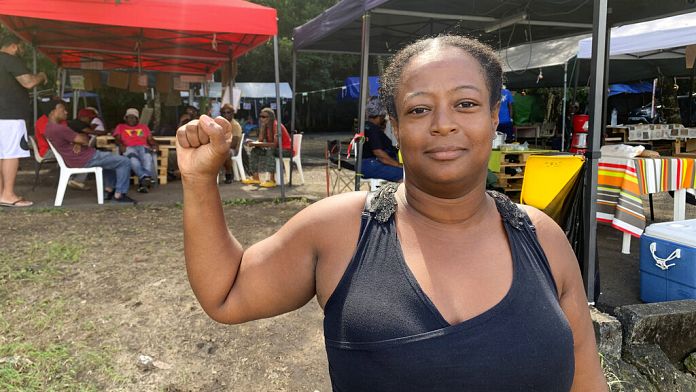 Overseas Minister Sébastien Lecornu arrived in Guadeloupe on Sunday, shaken by a serious social crisis like neighboring Martinique, showing “firmness” and “willingness to dialogue” with the inter-union that he is to meet on Monday.

The minister landed in Pointe-à-Pitre in the middle of the afternoon and will then go to Martinique, also shaken by blockades, violence and looting for a week. The night from Saturday to Sunday, however, was quieter in the two islands 120 km away.

Born from the refusal of compulsory vaccination for caregivers and firefighters, the movement has spread to political and social demands, in particular against the high cost of living, in these French Caribbean islands with a high unemployment rate, in particular among young people.

Mr. Lecornu indicated that the vaccination obligation, postponed to December 31, would not be lifted: “the laws of the Republic are intended to apply” in the French Antilles.

“I did not come here to embody a weak State, but (I came to embody) also obviously a State which dialogues” added Sébstien Lecornu, specifying that “the hand (was) extended, nevertheless it remains a hand of firmness “.

According to Max Evariste, of the FO union, the intersyndicale “cannot imagine that there will be decisions taken (during the visit), since it only comes for one day”.

The inter-union wants “all” organizations to participate in the meeting and calls for “real negotiations”, the “reintegration of suspended people” with all their rights, but also the “release of all those who have been convicted” afterwards. violence.

This latest request has “more than shocked” the Minister of Overseas Territories, who repeated that staff reluctant to vaccination would be accompanied to “create the conditions for their professional mobility”. These negotiations are due to start on Monday.

Sébastien Lecornu is also due to meet on Monday in Guadeloupe with “local elected officials and economic players,” the ministry said, as the next day in Martinique where he will also meet with the inter-union.

The minister, who sparked the ire of opposition in mainland France by indicating Friday that the government was “ready” to raise the issue of more autonomy for Guadeloupe, will return to Paris on Wednesday, the ministry said.

In a press release, elected Guadeloupe officials considered that the “current priority” was “the way out of the crisis” and that “the local domiciliation of decision-making power (was) a question which (should) be addressed in due time”.

In Martinique, the inter-union, the state and local elected officials signed an “method agreement” to try to get out of the crisis, the prefecture said in a statement.

It lists 7 thematic workshops (health, youth, cost of living including fuel and gas prices, transport, chlordeconomics, fishing, culture), corresponding to the major issues, which will be the subject of discussions from Monday.

“The conditions for implementing the vaccination obligation” will be discussed in particular, specifies the prefecture of Martinique.

“It is unacceptable that we are forced to be vaccinated. Unacceptable this blackmail of a vaccine against our salary (…) Life here is three times more expensive than in metropolitan France. The people say it does. has enough “, testifies to AFP Cédrick Louiset, firefighter for 27 years, present on a dam in Martinique.

On the island, as in Guadeloupe, the night from Saturday to Sunday was marked by a calm return after previous ones in which the police had come under gunfire.

In Martinique, however, police sources reported barricades “with thrown projectiles including Molotov cocktails at gendarmes”.

In Guadeloupe, where some traffic axes have been cleared, mainly in Grande-Terre, the night “has not seen any incidents or clashes occur”, according to the prefecture.

The violence and blockages that slow the economic activity of the islands and dissuade new arrivals from staying.