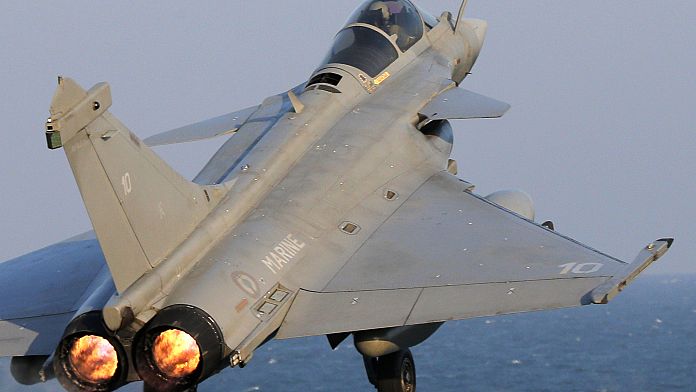 Indonesia on Thursday signed an order for 42 Burstas Paris and Jakarta seek to strengthen their ties in the face of growing tensions in Asia-Pacific.

“We have agreed on the purchase of 42 Rafale, with a contract signed for 6 Rafale (Thursday), and a future contract for 36”Indonesian Defense Minister Prabowo Subianto announced Thursday after a meeting with his French counterpart Florence Parly in Jakarta.

Southeast Asia’s largest country cultivating its non-aligned stance had never previously acquired French fighter jets, but it is seeking to diversify its alliances in the face of a rising tensions in the regionparticularly between China and the United States.

“42 Rafale! Indonesia chooses French industrial excellence!”, rejoiced President Emmanuel Macron on his twitter account. He greeted “a new step (which) strengthens our partnerships” in the Indo-Pacific.

“It’s a new Dassault country, that’s what makes it a historic contract”welcomed the CEO of Dassault Eric Trappier.

The order fixes an entry into force of the contract – conditioned on the payment of a deposit -, in two installments, with 6 devices of last generation then 36, explained to AFP the person in charge.

“The advantage is that by putting the first 6 into effect more quickly, we save a little time”, said the boss of the manufacturer of the Rafale. The contract includes industrial compensation (“offsets”) representing 85% of its value, Eric Trappier also indicated.

France is also looking to strengthen ties with Indonesia after seeing its strategy for asserting itself in the Asia-Pacific shaken last year when Australia broke off suddenly. a mega-contract to purchase French submarines and joins a strategic alliance, AUKUS, with the United States and the United Kingdom.

Since this disappointment, Paris has been trying to strengthen its alliance with its old partners, Japan and India, but also with Indonesia, and other partners in Asia.

France has thus initiated a “reinforced partnership” with Indonesiaduring the visit of Foreign Minister Jean-Yves Le Drian in November.

“Indonesia’s choice is one of sovereignty and technical excellence, with an aircraft that has demonstrated its operational capabilities on many occasions”French Minister of the Armed Forces Florence Parly told journalists.

The two ministers spoke of the importance of a “good coordination between all actors interested in defending a free, open Indo-Pacific based on effective multilateralism”she noted.

Following his visit, the two countries also initiated research and development cooperation in the field of submarines with an agreement between the French group Naval Group and the Indonesian shipbuilder PT Pal which “should lead to the acquisition of two Scorpene submarines”added the Indonesian minister.

The French group Thales has for its part concluded a memorandum with the Indonesian company PT LEN for cooperation in satellites, and Nexter with PT Pindad in ammunition.

The Indonesian air force has aging equipment, mainly American F-16s and Russian Sukhoi Su-27 and Su-30, and is in negotiations with multiple partners to renew its combat aircraft.

Especially since a contract that Indonesia had signed in 2018 for the purchase of eleven Sukhoi Su-35 fighter jets from Russia never materialized, due to the American Caatsa law which provides for sanctions. automatically when a country enters into a “significant transaction” with the Russian arms industry.

Jakarta is also negotiating the purchase of around 30 American F-15 fighter jets, according to the media, and is participating in a research and development project with South Korea for the KF-21 fighter jet.

Dassault experienced a auspicious year in 2021 with, 18 aircraft sold to Greece (including twelve second-hand)30 to Egypt and 12 second-hand to Croatia and a record order of 80 aircraft for the United Arab Emirates.

Murder of MP David Amess: concerns over the safety of British elected officials