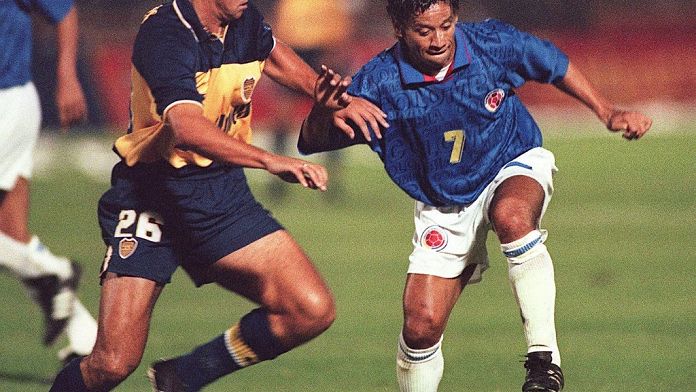 When the carabinieri handcuffed him at the exit of a cafe in Naples, he was wearing the red jersey of America de Cali, the Colombian football team of which he was the star. The arrest for drug trafficking in Italy of Anthony de Avila, aka the “Smurf”, caused a stir in Colombia, where the 58-year-old ex-footballer remains an unforgettable star of the round ball.

El “Pitufo” (the “Smurf” in Spanish), so nicknamed because of his 1.57 m, was arrested on September 20 in the center of Naples. “The police had received information indicating the presence in the city of South Americans who came to meet” figures of the Neapolitan underworld, explains to AFP a local police official, Davide Della Cioppa. “At the time of his arrest, de Avila had with him only a Colombian identity card dating from 1981” and “claimed to be a tourist”.

At the station, suspicious officers “then discovered that he had been the subject” in 2004 a Italian justice sentenced to 12 years in prison“for criminal association related to drug trafficking”, adds Davide Della Cioppa.

El “Pitufo” was a center forward of the famous Colombian club in the 80s and 90s, he is a legend in Cali, of which he remains the top scorer of all time with 208 goals, and a figure of national football.

His arrest made headlines in Colombia, where everyone had apparently forgotten that old Italian conviction.

The former striker “claims his innocence and did not know that he was convicted and wanted”, assures his lawyer, Fabrizio de Maio, who recognizes that it will be “mission impossible” to make him avoid his 12 years in prison.

Not very good at business

Arrested at the time on Italian territory, the footballer had finally been able to return home, mysteriously free as the air, to resume his business and his conversion. As a young talent researcher for his fetish team, at the head of a pizzeria, as a shirt seller, or as a promoter of his own wine brand.

“He was the best at scoring goals, but for business it wasn’t that…”, recalls, sorry, one of his childhood friends quoted by the weekly Semana.

“We are all surprised (…) At the last news, he was with two young people” promising footballers looking for a European team. According to his relatives, quoted by the daily El Tiempo, the “Smurf” was also traveling for a construction company operating in Italy.

His itinerary remains unclear: Italy, Spain, France. It is established that he stayed in the Netherlands at the beginning of August, where the ex-footballer posted a video on Facebook, from Amsterdam, “sitting on a sidewalk in the shopping district of Burmester”. “We are nothing in life. Millions, cars, women are of no use, only human beings have value”He philosophized, taking a sudden inspiration, in his red jersey.

According to the press, he was spotted precisely in Amsterdam for his contacts with Dutch traffickers.

This is not the first time that a footballer from the country that produces the most cocaine in the world finds himself in the nets of justice for drug trafficking: Edwin Congo (former Real Madrid), Jhon Viáfara, Diego Leon Osorio, Luis Alfonso “Bendito”, Wilson Pérez… the list goes on.

It’s not just the players. In Colombia, drug money is seeping everywhere… and of course in football, king sport in the country. In the 1980s and 1990s, having a football team “was an asset”, a tool of popularity for some narcos, recalls journalist Ignacio Gomez, co-author of the reference book “The Masters of the game”.

“It was a natural laundry” for an environment with piles of cash. Of sixteen first division clubs, fifteen were linked to the drug business, says Gomez.

Every big team then had its “capo”: the Millonarios of Bogota with Gonzalo Rodriguez Gacha says the “Mexican”; the Nacional and the Independiente of Medellin with the famous Pablo Escobar; and Cali America with the Cali cartel of the Rodriguez Orejuela brothers.

Tribute to the bosses of the Cali cartel

“Pitufo”, the lightning forward, played for America between 1982 and 1996, the most glorious era for America. A golden age that coincides with the influence on the club’s board of directors brothers Miguel and Gilberto Rodriguez Orejuela, leaders of the Cali cartel, captured in 1995, then extradited and sentenced to the United States where they are still serving their sentences. In 1997, during the qualification for the World Cup-98 in France, the “Smurf”, author of the goal of the victory (1-0) of the national team over Ecuador, had paid a vibrant tribute to the Orejuela brothers, “deprived of their freedom”.

Today, “the important thing is that he pray to God and solve this case”, comments one of his former football friends, Elkin Congote.

In his Italian cell, de Avila “is not alone”, wants to believe El Pais, Cali newspaper. “We will not let him die in prison”, assured Tulio Gomez, major shareholder of America of Cali.