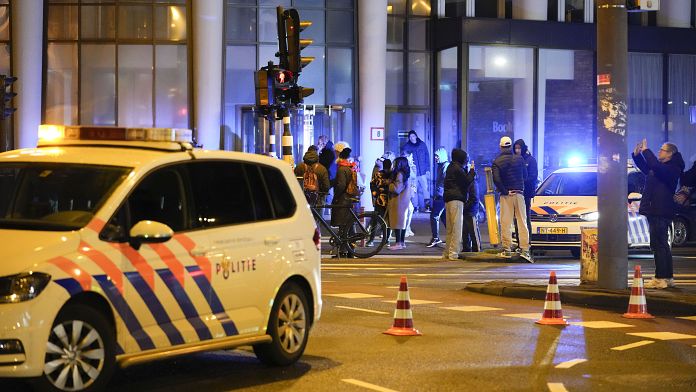 The suspect in the hostage-taking at an Apple Store in one of Amsterdam’s main squares that held the city in suspense on Tuesday night is a 27-year-old man from the city who had demanded 200 million euros in cryptocurrency.

After holding a hostage at gunpoint for several hours on Tuesday evening and threatening to blow himself up, the suspect was subdued and transported”seriously injured“At the hospital where he remains under surveillance, police said in a statement on Wednesday.”All options are considered” regarding the reason for this hostage-taking, said the police, who also found that the man was carrying explosives, which were not activated.

Investigators have no reason to believe there are multiple suspects at this time, police said. The suspect’s home and a house where he went regularly were searched.

The hostage-taking held in suspense during almost five hours locals around Leidseplein, a central Amsterdam spot popular with locals and tourists alike for its many bars and cafes. It ended after the hostage taker asked law enforcement for water.

“Just when the city was about to reopen and return to normal life, violence once again emerges in the heart (…) of Amsterdam“said the deputy mayor Rutger Groot Wassink at a press conference overnight.

The Amsterdam police had received a report of a possible attack by a gunman in a store. The first officers dispatched to the scene had been targeted by shots with an automatic weapon, said the police chief.

It soon emerged that the suspect, an Amsterdammer, was in possession of a firearm and footage suggested he may be wearing an explosive vest. The 27-year-old demanded 200 million euros in cryptocurrency and safe conduct, law enforcement said.

The square surrounding the store was quickly cordoned off, while cafes and theaters were closed. Those present in the square when the hostage-taking began were asked to take refuge in cafes, and journalists were kept at a distance.

Many people were able to leave the building but the man managed to directly take a person hostage, a man from Bulgaria according to the police, by holding him under the shoulder. More than 70 people were evacuated from the building where the Apple store was located.

“The controlled and decisive action of the police deserves nothing but praise“, Minister of Justice and Security Dilan Yesilgöz – Zegerius said on Twitter. “It prevented the worst“, she added.

“I think the hostage played a kind of hero role“said Amsterdam police chief Frank Paauw.”In fractions of a second“, he ended the hostage-taking, he added.

After immobilizing the suspect, the police examined the man lying in the street using a robot. They had initially announced that they had not found any explosives.

Child crime in the Church: the Pope wants an annual report on the fight against this scourge